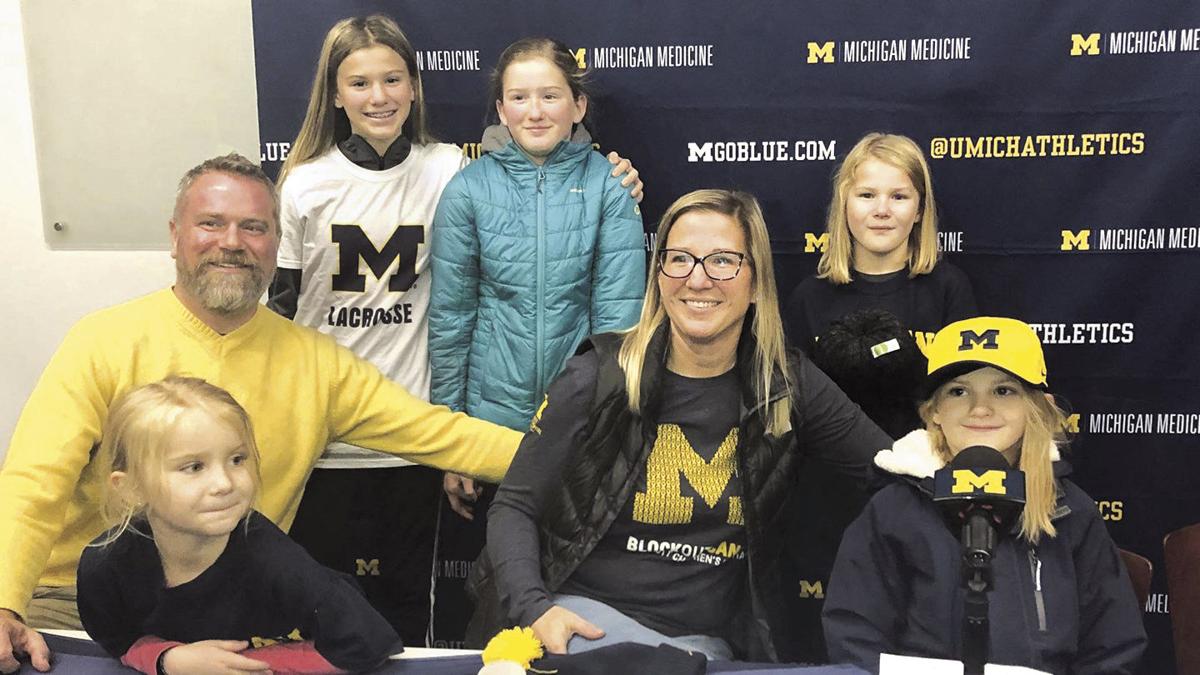 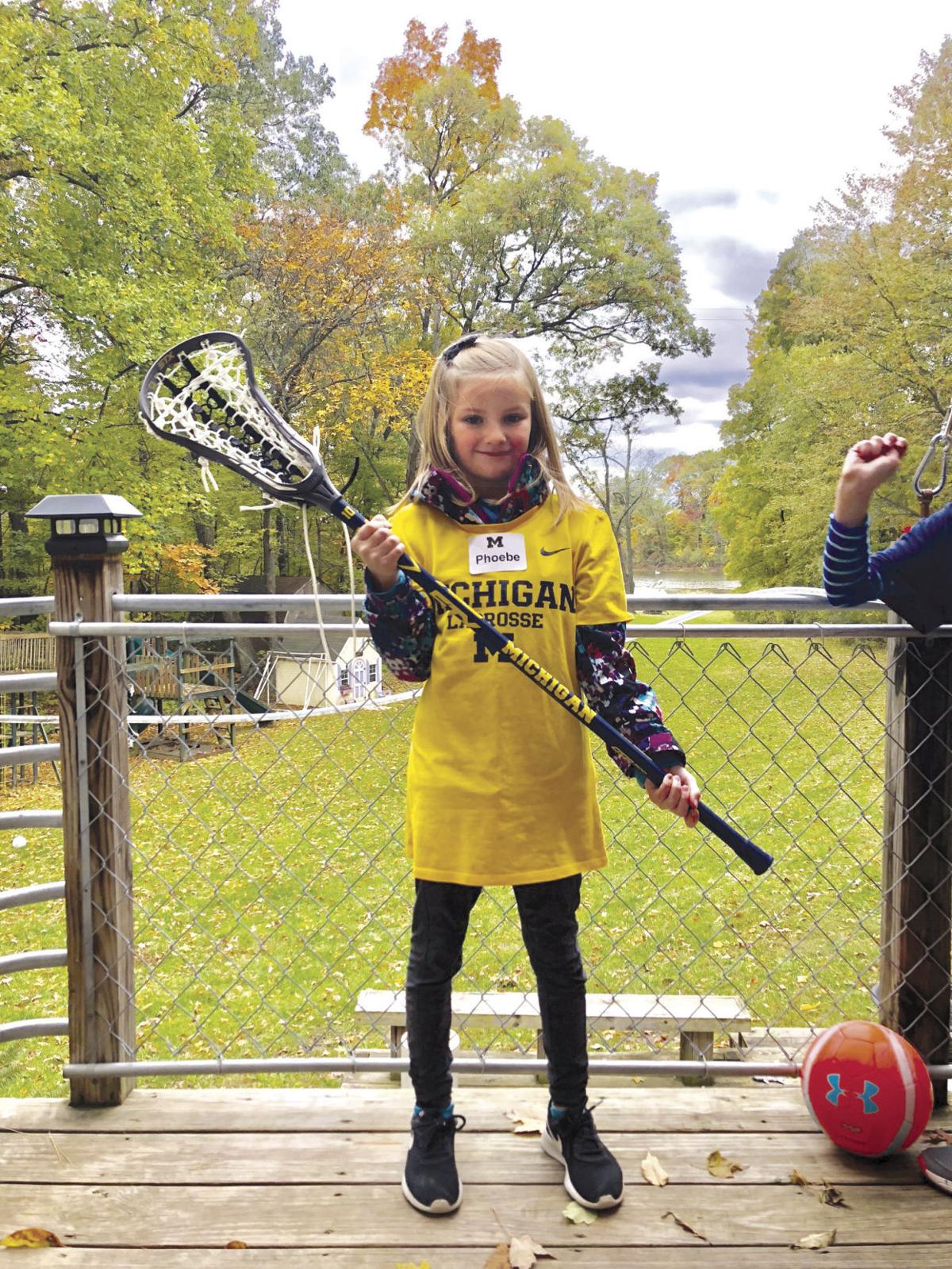 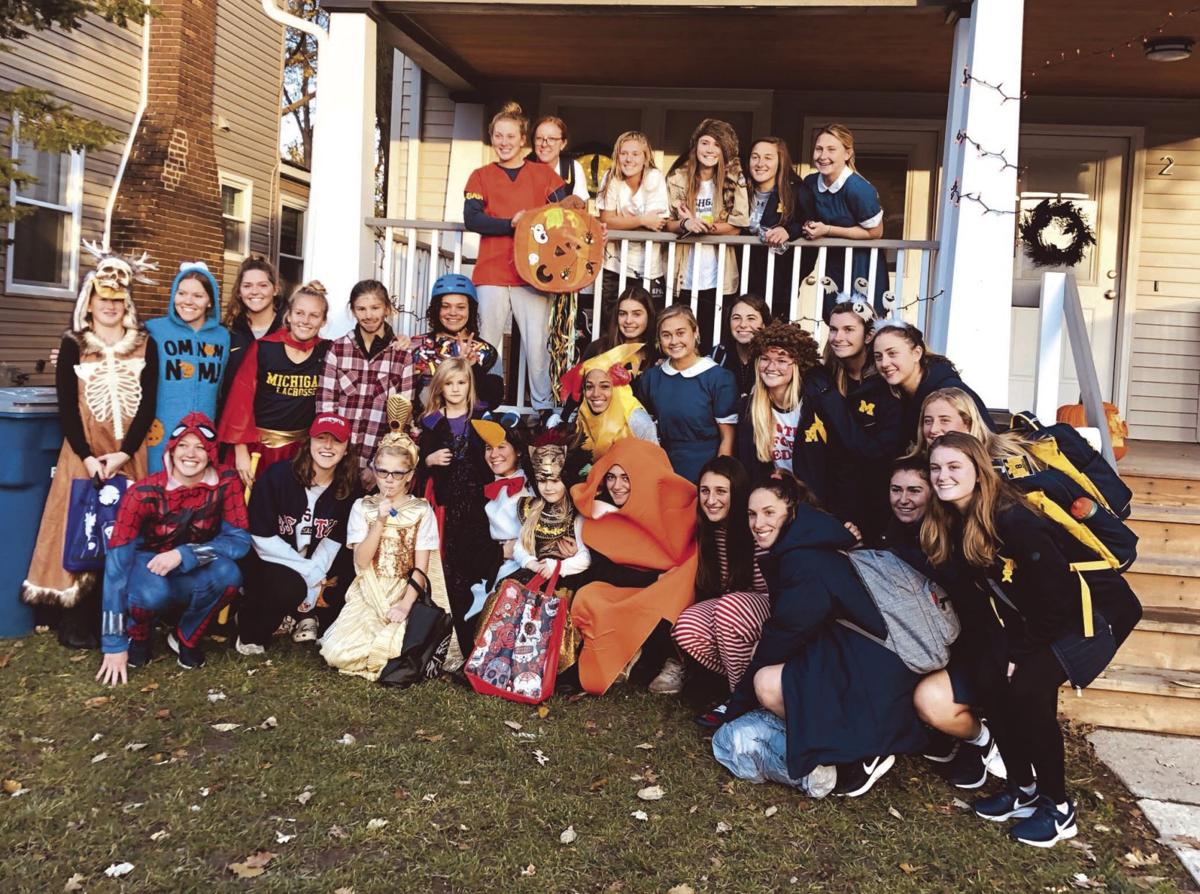 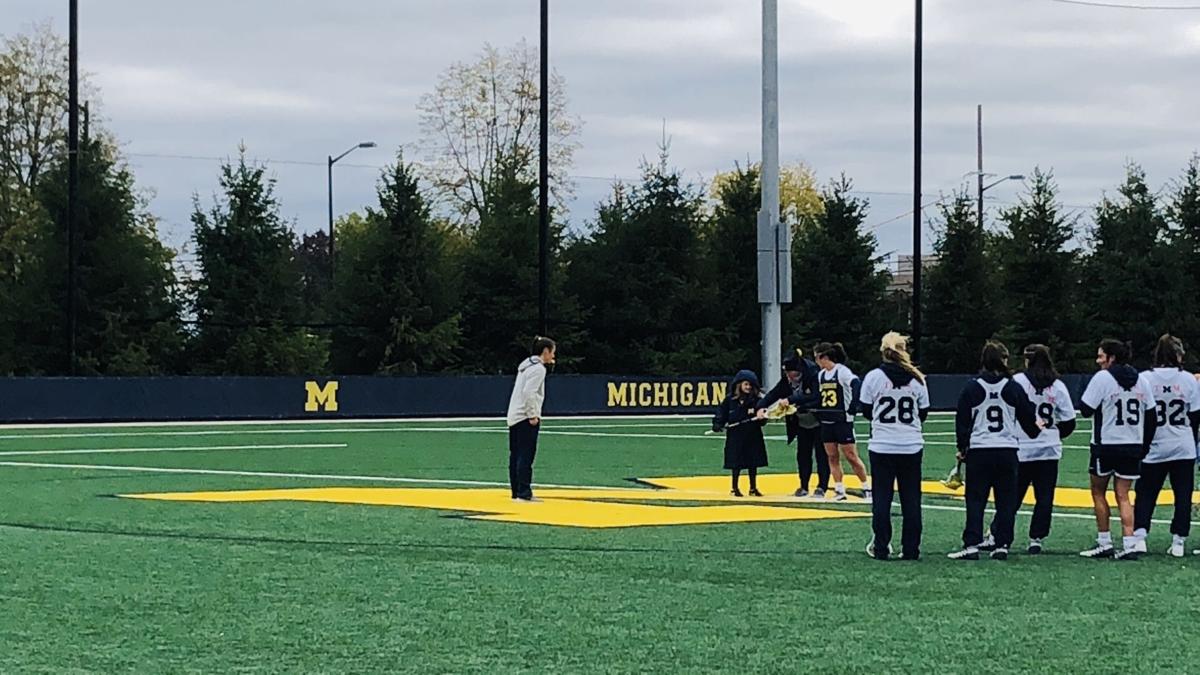 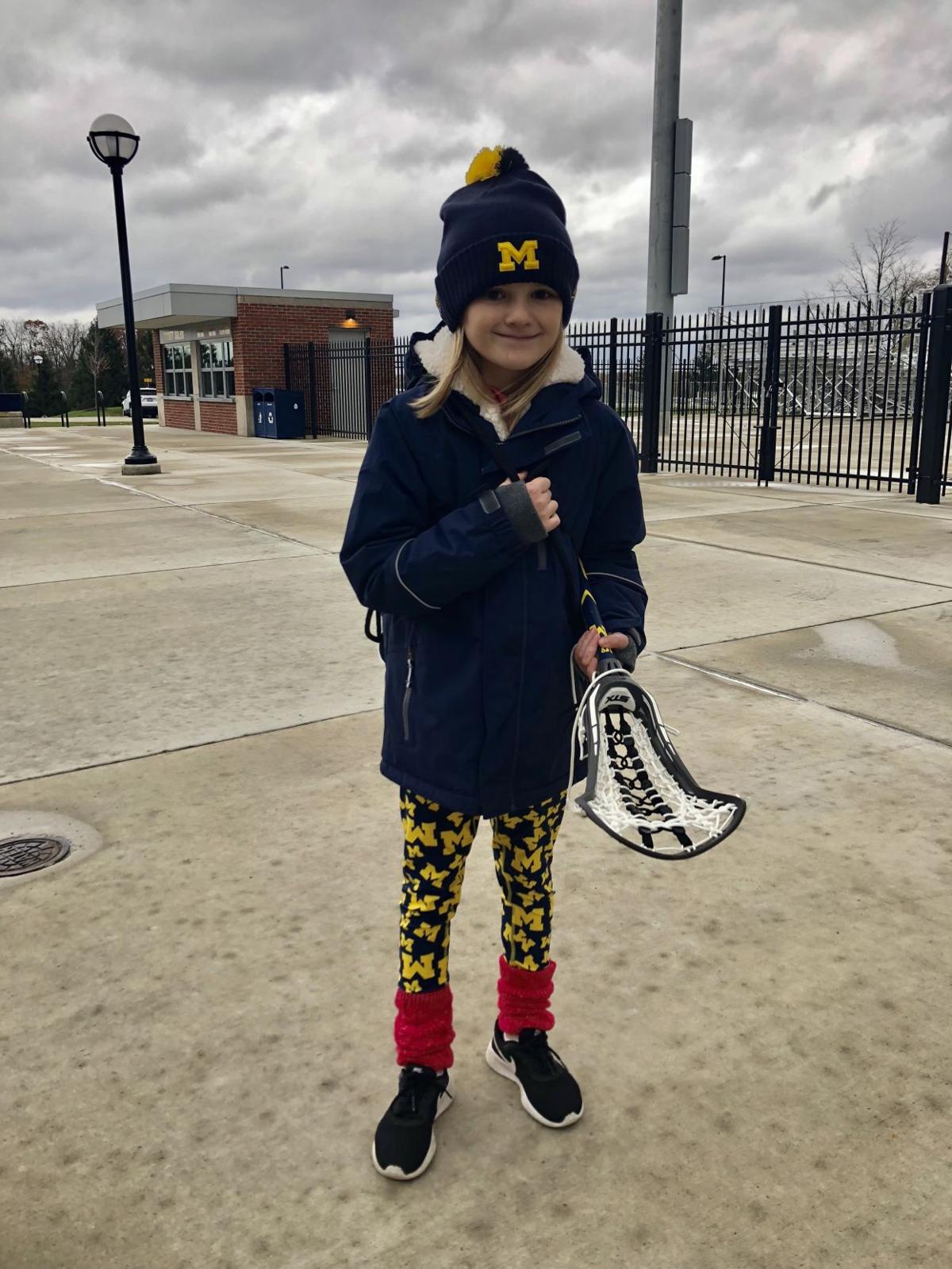 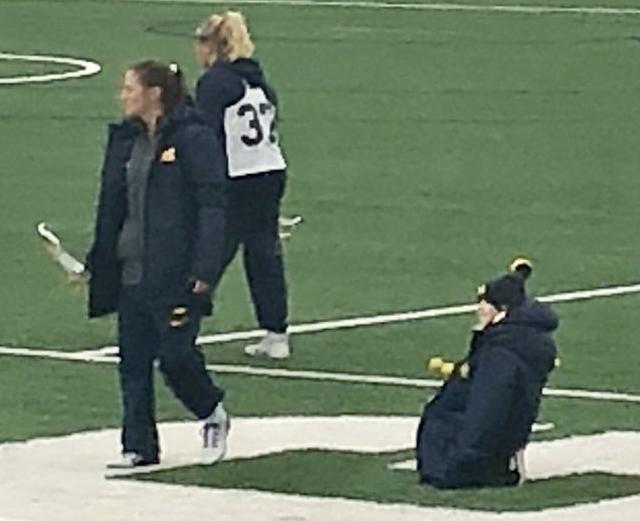 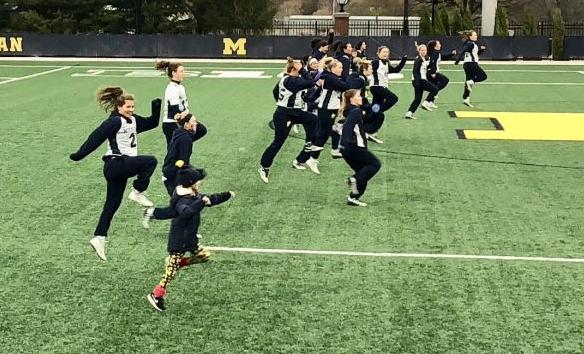 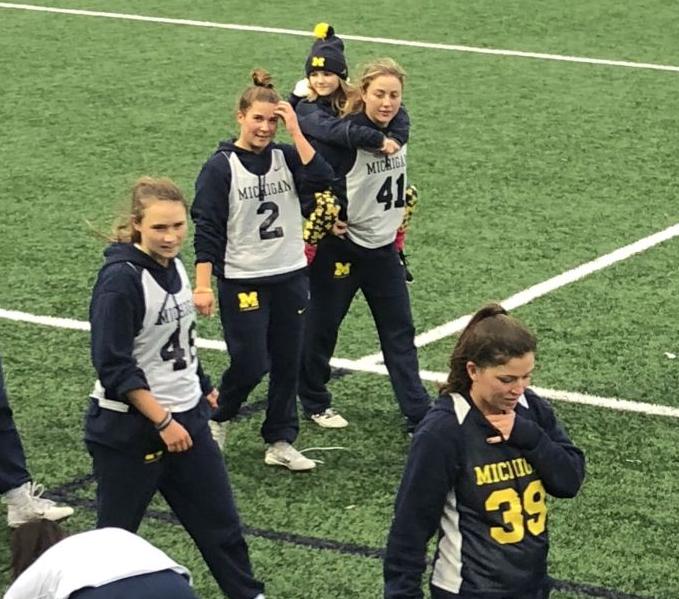 Phoebe Keech is just like a lot of 7-year-old girls.

The Fenton resident enjoys spending time with her family, which includes four sisters. She loves animals, loves running and playing with dolls. One of her favorite videos is the Disney movie “Moana.”

But now Phoebe, who was diagnosed at the age of 2 with Acute Lymphoblastic Leukemia, has a new love — that love is her teammates on the University of Michigan women’s lacrosse team.

Through a Boston-based nonprofit organization called Team IMPACT, Phoebe officially signed a National Letter of Intent Tuesday to become a member of the Wolverines women’s lacrosse team. She did so during a press conference attended by family, friends, her teammates and her coaches.

Draft Day invites children facing life-threatening or chronic illnesses to join college athletic teams. Children drafted onto a team become official members of the squad from Draft Day. While on the team the child attends practices, games and social events with the program. It creates personal relationships among the child, the student-athletes and the coaching staff. Phoebe was excited to sign her Letter of Intent on Tuesday.

Phoebe may have officially joined the team on Draft Day, but she’s already been a part of the women’s lacrosse team’s life. All of the team went trick-or-treating with her on Halloween.

“It was truly amazing,” Carrie Keech said. “The entire team went out with her. Many of them dressed up.”

The team is quickly falling in love with their new team member.

“When I first met Phoebe her mom said she’s a little bit shy at first, but we got in a dance battle the other day, just totally locked in,” said senior lacrosse captain Mira Shane. “I think we have had a huge impact already. We were trick-or-treating with her on Halloween and I think seeing everyone gather together created great smiles and great vibes.”

“This is a special day for our program,” said University of Michigan women’s lacrosse coach Hannah Nielsen.

“Team IMPACT is an amazing organization that I am excited for our program to be involved with. I have witnessed first-hand how these relationships can positively change lives both for the family and child as well as the student-athletes, and I’m excited for our athletes and Phoebe to experience that. Phoebe defines what it means to be tough and resilient, and through any situation she maintains her positive attitude. I am confident that she will be a huge factor to this team’s continued success this year and in years to come.”

Phoebe is a fighter. Acute Lymphoblastic Leukemia is a cancer that occurs in the blood and bone marrow. After getting the phone call about Phoebe’s diagnosis  while she was preparing dinner, Phoebe was quickly admitted to the C.S. Mott Children’s Hospital and undergoing a series of surgeries within 15 hours of the phone call.

After that, Phoebe went through two years and four months of chemotherapy before going into remission just prior to her fifth birthday. Phoebe sees an oncologist every 12 weeks for checkups, and will continue to have checkups for the next two years. Keech said Phoebe’s current prognosis seems cautiously optimistic, but the checkups are necessary. Keech said being with the team has helped Phoebe with her self-confidence. After the years of treatment, Phoebe has lagged behind the natural development of most children her age. However, she’s able get a lot of her physical therapy she needs through the team, which in turn helps her own self-confidence.

She practices with the team, doing many of the drills the team does. Her family expects to get her to as many practices and probably at least all of the home games this season so Phoebe can be with her team. Phoebe is kind of a pioneer within the Team IMPACT program, because she’s the first girl to sign up with a women’s college team at the University of Michigan.

“She is just the strongest (kid) and I think hearing parts of her story on signing day was a true inspiration,” Shane said of her new teammate. “I’m so thankful to have her and her strength on the team.”

“Especially this time of the year the girls are stressed with exams, lacrosse and all of it, but at the end of the day they are fortunate enough to be stressed by those things,” Nielsen said. “When you hear what Phoebe has been through and what life can actually bring, it makes you sit back and think, ‘I’m OK.’”

Since 2011 Team IMPACT has matched more than 1,300 children with more than 500 colleges in 47 states. Keech is happy her daughter is one of them. Ann Arbor used to symbolize Phoebe’s trips to what Keech said Phoebe called “her hospital.” But now, they represent trips Phoebe’s team.

“We are so grateful to the players and coach Hannah Nielsen,” Keech said. “They’ve been an inspiration.”

And certainly Phoebe is equally an inspiration to her new teammates.