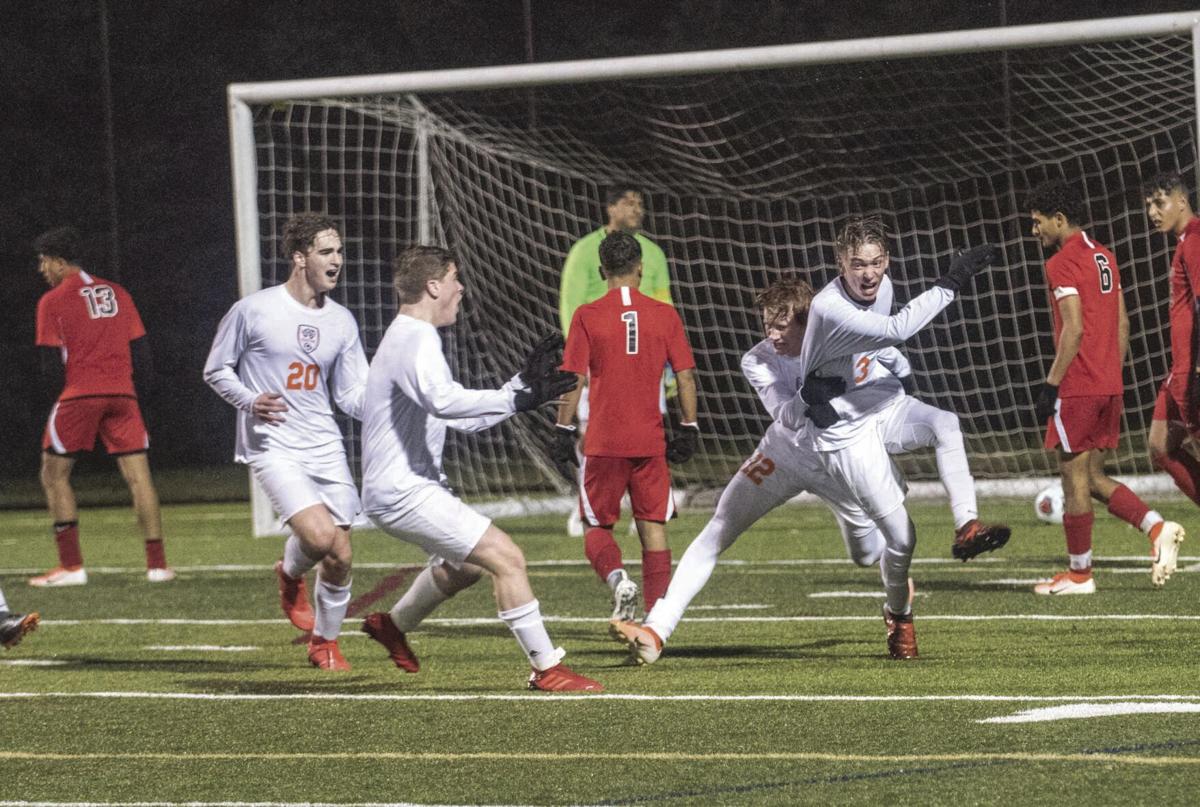 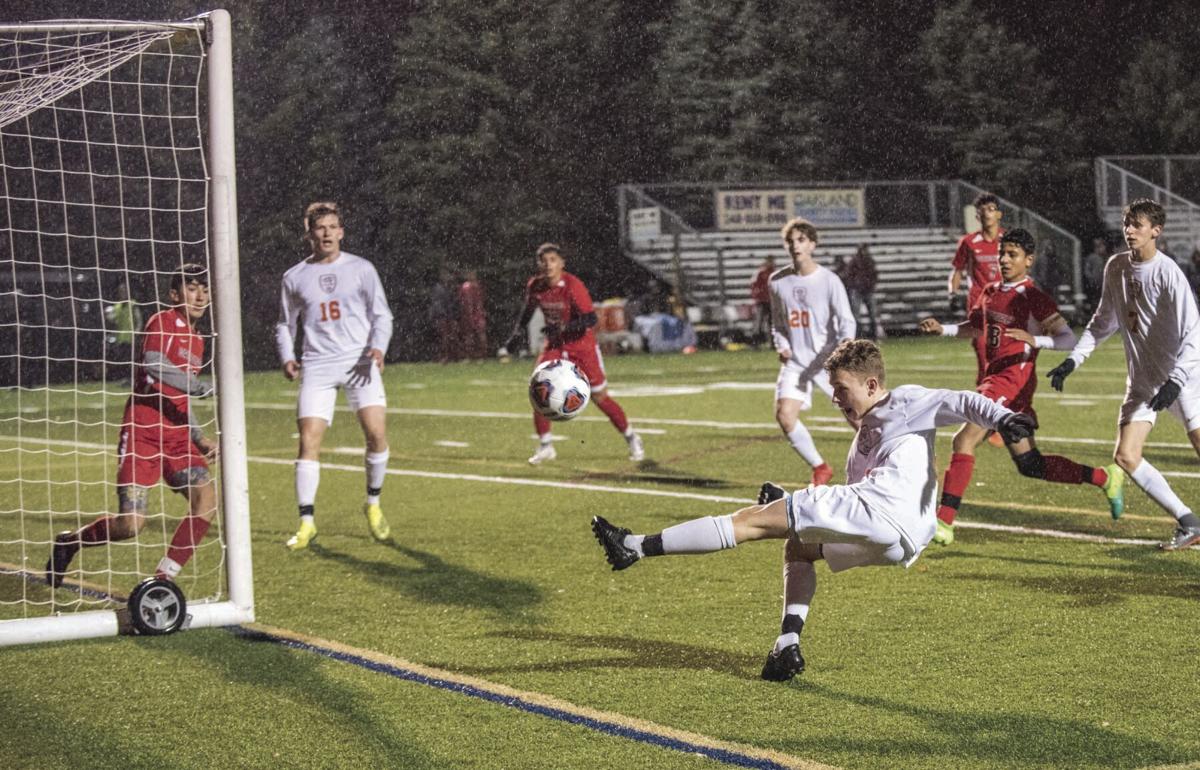 One of the biggest by Melvindale in Fenton’s loss in the  D2 state semifinals last fall didn’t involve the keeper. Fenton’s Will Dickens took a shot that was saved by Melvindale’s Carlos Huerta with a header. 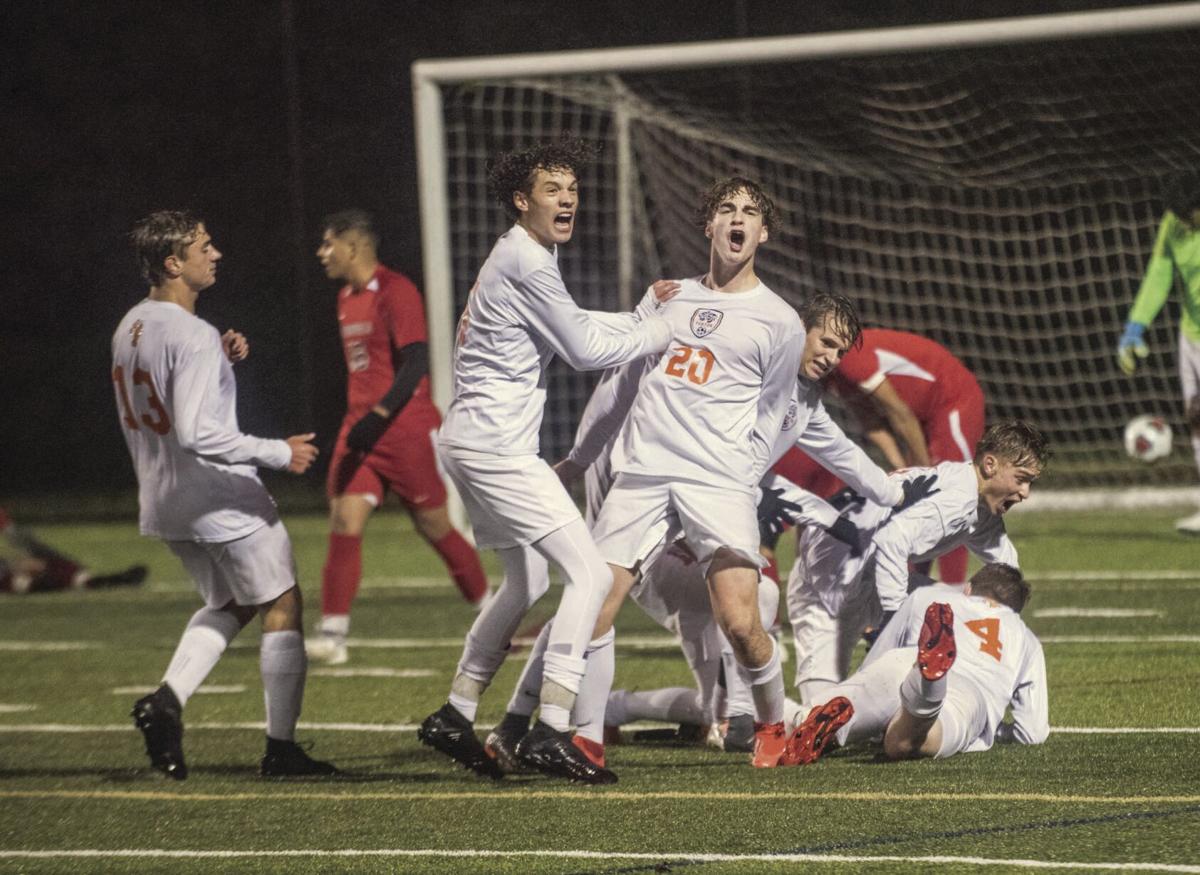 One of the biggest by Melvindale in Fenton’s loss in the  D2 state semifinals last fall didn’t involve the keeper. Fenton’s Will Dickens took a shot that was saved by Melvindale’s Carlos Huerta with a header.

Certainly, most people wouldn’t have minded getting out of the elements and just getting indoors.

However, at the end of Fenton’s Division 2 state semifinal contest against Melvindale, the Tigers would’ve loved to stay in the rain a bit longer. After all, when the final whistle ended the contest, it represented the end of an amazing soccer season that included a Metro League championship, a district title, a regional title and the school’s second-ever boys soccer state semifinal appearance.

The Tigers (16-6-1) controlled play for most of regulation, but were only tied 1-1 with Melvindale (16-3-2) when the first 80 minutes expired. In the two 10-minute overtime sessions, the Cardinals got better spacing and worked the ball well on the ground, scoring three goals during the two extra sessions. It resulted in a 4-1 Melvindale victory, ending the Tigers’ season.

“It means a lot,” Flannery said about playing in Fenton’s only two state semifinal contests. “The whole grind and postseason run is so amazing.

“It’s my last year and I just wanted it to be the best one yet, and it turned out to be one of the best, too.”

“The season meant everything to me,” Fenton senior RJ Stack said. “It felt good to go so far our senior year. It’s a perfect season. I learned that this program is the best ever. It’s the best possible program you could ever be part of, especially in the school, and the best in the state.”

“I have never been on a team that’s been so together like friends,” senior Ben Sheffield said. “We get along so well. I’m going to miss that so much.”

Fenton varsity boys soccer coach Matt Sullivan may have summed up the feelings the best moments after the game ended.

“It was a great year,” Sullivan said. “They had a ton of time together. For us it doesn’t matter if it ends 4-1 or 1-0. Our season is over and that’s the sad part of it. I couldn’t be more proud of these guys. They had a great season. They treated each other so well. It’s awesome. The seniors were awesome. Not a single complaint all year — not one.”

Fenton controlled the action during most of regulation. The Tigers outshot Melvindale 17-7 and enjoyed a 9-1 corner kick edge during regulation, but the game was only tied at 1-1 at the end of the first 80 minutes. However, the tide turned during the two 10-minute overtimes. The Cardinals scored three goals during the two overtime periods, earning a 4-1 victory and a spot in the D2 state championship contest.

Fenton was dominating the opening half but Melvindale scored first, getting a goal on a shot by Carlos Huerta off an assist by Alhusain Yahya with 23:40 left on a goal that was completely against the flow of the contest. Fenton trailed 1-0 at halftime.

The Tigers tied it up at 1-1 with 25:50 left in the second half. Andrew Hutchins crossed the ball and Jimmy Myer scored. From there, the game remained tied 1-1 entering overtime.

“We had momentum and I could feel it,” Myers said about the goal. “I don’t remember who but (Hutchins)

crossed it over and I got my foot to it before the defender.”

“They had some really good ball dribblers so we were passing it in the air and trying to get it to our forwards,” Flannery said. “We controlled most of it. We had plenty of opportunities and we hit some posts, but the goalie saved some of them as well.”

Overtime felt like a different game. The Cardinals were able to get more space and create more scoring chances in the two 10-minute extra sessions, than they could in regulation. Eventually, it resulted in goals. With 5:06 left in the first OT, Melvindale scored on a header shot by Abdul Fattah Ahmed off a corner kick. The lead grew to 3-1 when Alhasan Yahya scored on a 40-yard shot with 6.6 seconds left in the first extra session.

If the game wasn’t over after that goal, Melvindale’s Huerta dribbled with the ball down the bench side of the pitch, and took a shot to the nearside of the goal. He scored and Melvindale led 4-1.

“I felt we had a really good shot, but just got unlucky,” Myer said. “I had an amazing season with my brothers and wouldn’t want it any other way. “

“It happens. Just like any other sport, it happens,” Sullivan said about how Fenton controlled the action in regulation but were only tied. “And tonight wasn’t our night. I really thought it was going to be right from the start and it is what it is. But I couldn’t be more proud.”