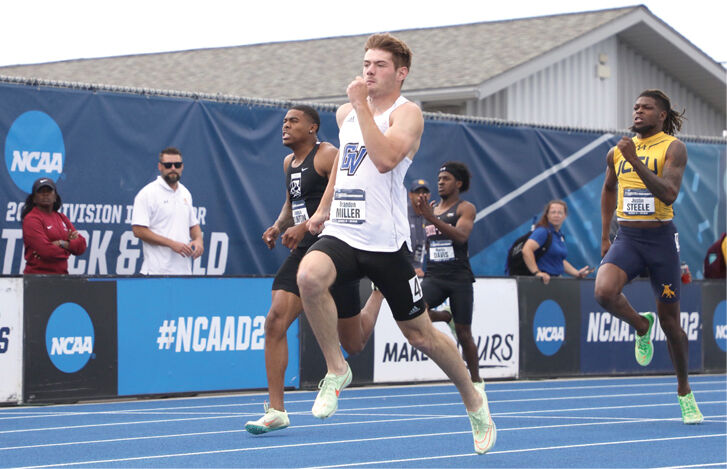 Fenton 2021 graduate and Grand Valley State University freshman Brandon Miller won the DII NCAA Championship during the indoor and outdoor season in the 200-meter dash. He’s transferring to the University of Kentucky this fall. 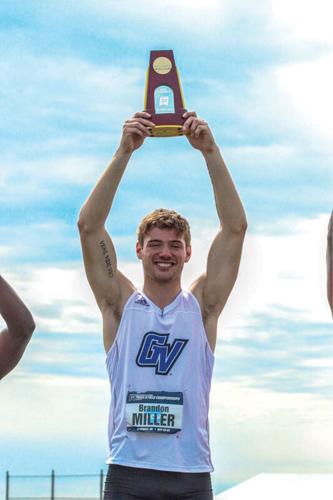 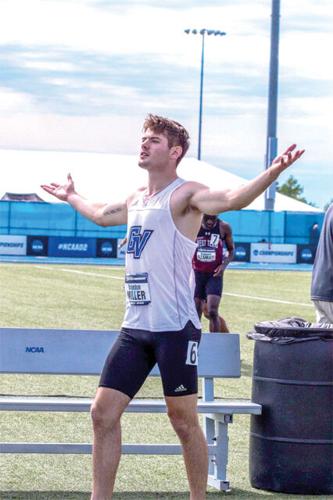 Fenton 2021 graduate and Grand Valley State University freshman Brandon Miller won the DII NCAA Championship during the indoor and outdoor season in the 200-meter dash. He’s transferring to the University of Kentucky this fall.

Miller had pretty much the dream season.

During what will be his only season with the Lakers, Miller captured two individual Division II NCAA track and field event championships. He also earned All-American honors in some other events.

Consequently, Miller won’t be at Grand Valley State University next fall. Instead, he took advantage of the NCAA portal transfer and will be going to Division I school, The University of Kentucky, in the fall.

“Honestly, no. Everything went pretty much according to plan. I can’t be picky,” Miller said about his freshman season at GVSU.

During the winter/spring he proved he was ready for DII competition by capturing the indoor 200-meter dash national championship, helping GVSU win its first-ever NCAA DII National Indoor Track and Field Championship. While at the meet, he recorded a school-record and personal-best time of 21.02 seconds at the indoor track meet. He also was part of GVSU sixth-place 1,600 relay team that earned a sixth-place finish in 3:12.46. He earned First-Team NCAA status for that performance as well.

“It was an amazing experience,” Miller said. “I went in the meet (with the nation’s sixth-best time in the 200) and I ended up winning it. I got the first-seeded time in prelims and that gave me a huge confidence boost. And I didn’t push too hard to get that first-seeded time, so I came in with a boatload of confidence. I ran my own race (in the finals) and didn’t let anyone get in my head. ... It was exciting because I was only 18 and I won my first NCAA title.”

Miller’s coach, Jerry Baltes, was particularly impressed by his efforts.

“I want to give a special shout out to our freshman Brandon Miller who won the national championship as a freshman,” Baltes was quoted in a press release by GVSU about the indoor meet. “I told him he didn’t need to be super-human to win the race, we just needed him to score a couple of points.”

It was said Miller remarked prior to the race, “I’m going to win the darn thing.”

That wouldn’t be the end of Miller’s outstanding freshman season. During the outdoor season he displayed his talent early on when he was named the Great Lakes Intercollegiate Athletics Conference (GLIAC) Athlete of the Week when he won the 100 meter dash in a GVSU record-breaking time of 10.25 seconds at the Al Owens Classic on April 23.

His success was just starting. He was named the Freshman of the Year at the GLIAC Outdoor meet after winning the 200 with a school- and conference-record time of 20.79 seconds. He also helped the 1,600 relay (3:16.91) and the 400 relay (41.15) to conference championships. He helped GVSU win its fourth straight conference title.

But then came the NCAA DII National Outdoor Track and Field Championship. While there, he earned a time of 20.44 seconds in the 200 prelim, helping set up his eventual second D2 national championship of the school year. He won the 200 finals with a school-record time of 20.20 seconds. At one time Miller trailed by about six or seven meters, but sprinted to the event championship with a strong finish.

“I always focus on my execution and my positioning in the race,” Miller said. “He got off pretty hard. I know my strength is the back end, and I knew I needed to stay true to my race, and the way I was seeing my race, I thought I’d be able to catch him. I didn’t panic, kept chasing and I finally caught him with 15 meters left. I stayed true to my race.”

Miller said he accomplished what he wanted to during his season at GVSU.

And now, Miller is off to his next stage of his sprinting career at Kentucky. He said when he entered the transfer portal, Kentucky track coach Tim Hall was interested immediately. Miller’s times already are comparable with the fastest 200 runners on Kentucky’s squad.

“He made it clear Kentucky wanted me,” Miller said. “I love Lexington and I love the vibe of the team. That’s what I was looking for. Coach Tim Hall showed me his training philsophy and everything made sense to me. This is the place where I need to be.”