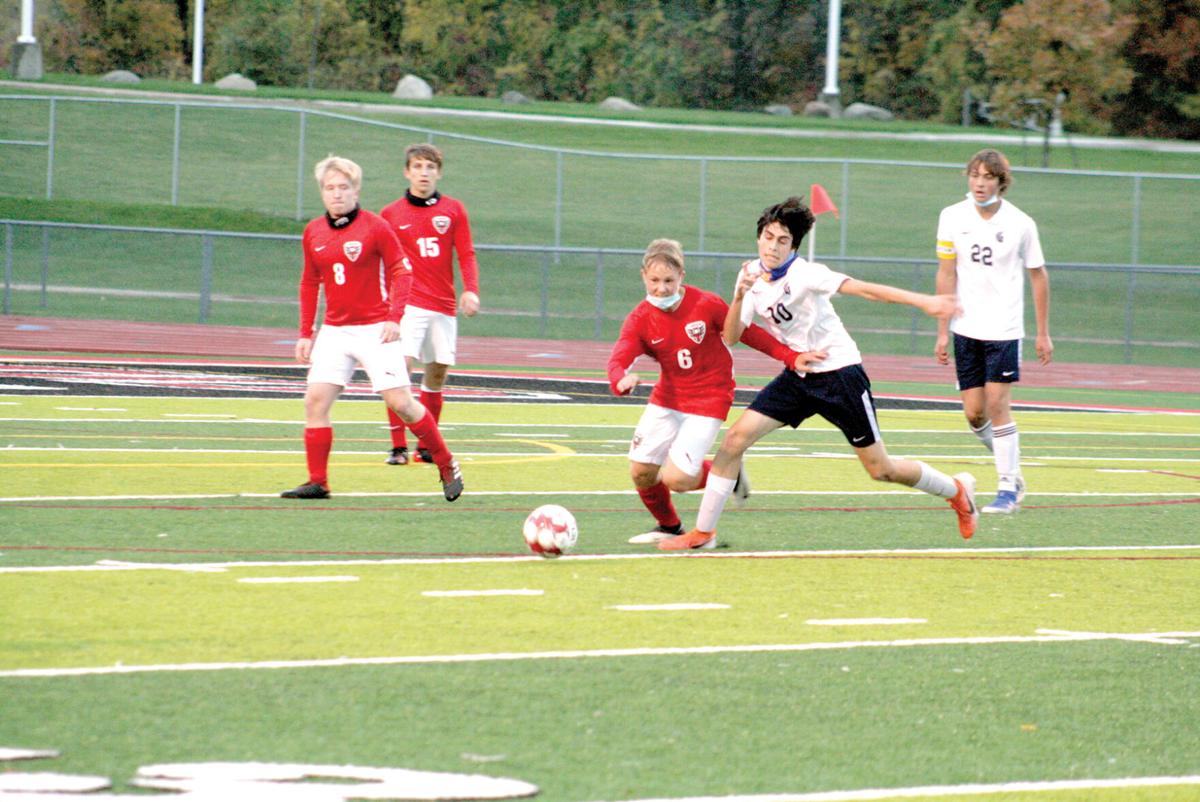 Daniel Duprey battles for the ball in the same game. Fenton, Linden and Goodrich ended in a tie for first place in the final Metro League standings. 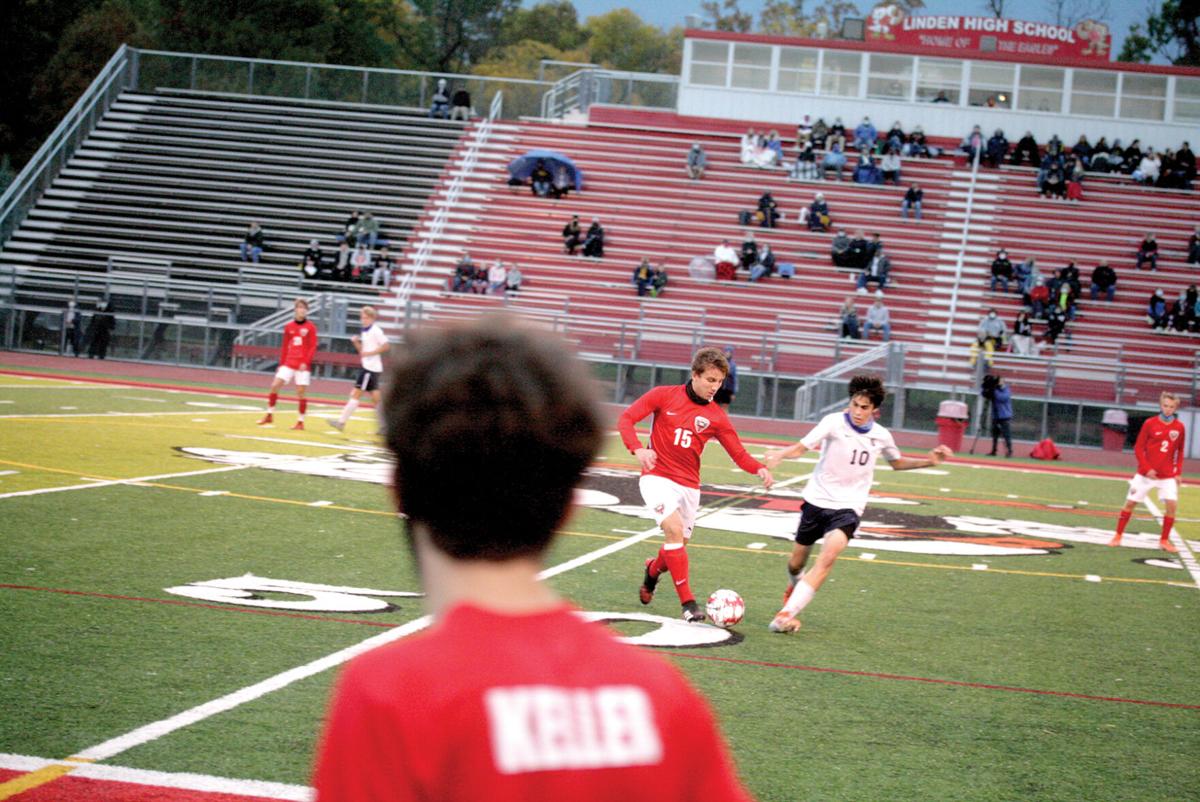 Linden’s Colin Love tries to dribble the ball downfield in a contest with Goodrich. 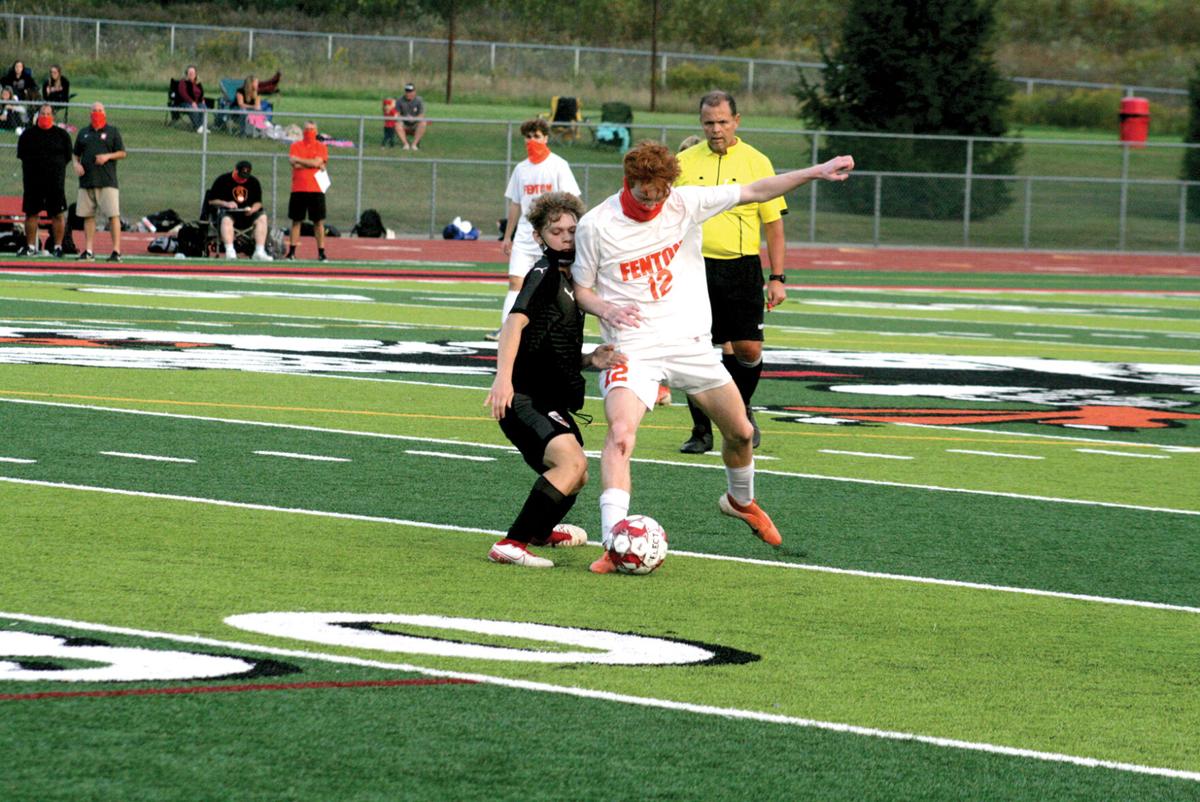 Fenton’s Andrew Hutchins protects the ball in a recent game against Linden.

Daniel Duprey battles for the ball in the same game. Fenton, Linden and Goodrich ended in a tie for first place in the final Metro League standings.

Linden’s Colin Love tries to dribble the ball downfield in a contest with Goodrich.

Fenton’s Andrew Hutchins protects the ball in a recent game against Linden.

All the Fenton varsity boys soccer team could do on Monday was take care of its business.

The Tigers had to beat Swartz Creek in order to have any chance of earning a three-way-Metro League championship with Linden and Goodrich for the second straight season.

After that, the Tigers had to hope Goodrich could beat Linden to force the three-way tie.

The Tigers (10-1) took care of business. Des Coughlin scored a goal just four minutes into Fenton’s road contest at Swartz Creek and never trailed in a 4-2 victory against the Dragons.

The Martians — and Mother Nature — helped out with the rest as Goodrich won a 1-0 verdict at Linden, a game that was called at halftime due to weather. That meant for the second straight season, the three teams tied for the league crown. It also meant Fenton earned at least a share for three straight seasons and four of the last five seasons. Of course,

Linden and Goodrich have earned at least a share of the crown each of the last two years as well. The three are creating a nice little rivalry within the Metro circles.

“Mother Nature worked in our favor Monday night both at Swartz Creek and in Linden,” Fenton varsity boys soccer coach Matt Sullivan said. “We don’t talk about league championships or district and regional championships as a goal for us at the beginning of the season. We never measure the success of our seasons by those titles. But we do fortunate to have them and it’s always nice to look back and see those when you’re older.

“The Goodrich rivalry has been a great addition to the Metro League in our district. For a school their size, their program has a great history, including a state championship, and they play a very physical aggressive style similar to ours. They have made our league that much better.”

Swartz Creek tied the game up,but Will Dickens gave the Tigers a 2-1 lead off an Austin Ames cross. Ben Chapple made it a 3-1 lead midway through the second half on a putback shot after Calvin Curtis took the initial shot.

The Dragons tried to battle back, cutting the gap to 3-2 at one time, but Andrew Hutchins, who assisted Coughlin’s opening goal, scored on an Ashton McKellar assist earning the Tigers the 4-2 win.

The Tigers still had to find out what happened to Linden before they could celebrate a league crown. Linden ended up losing to Goodrich 1-0 in a game that was called at halftime due to weather. That type of stuff should also enhance the three-way rivalry. Fenton lost to Linden 4-2 earlier this season, putting the Tigers one game behind Linden entering the final night of the season. Goodrich also trailed by a game entering Monday, but obviously made up that game with the win against the Eagles as well.