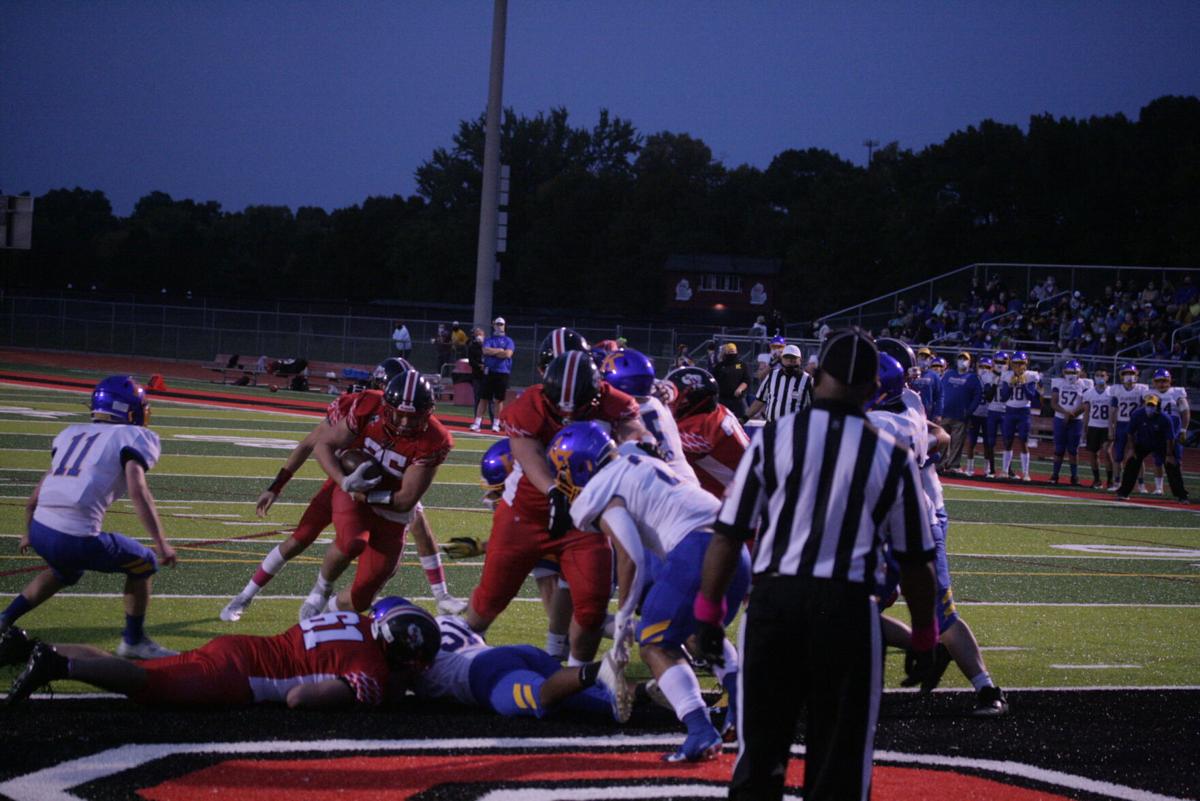 Linden’s Bryce Eliuk (left) scores one of his four touchdowns in the Eagles’ 43-22 victory against Kearsley. 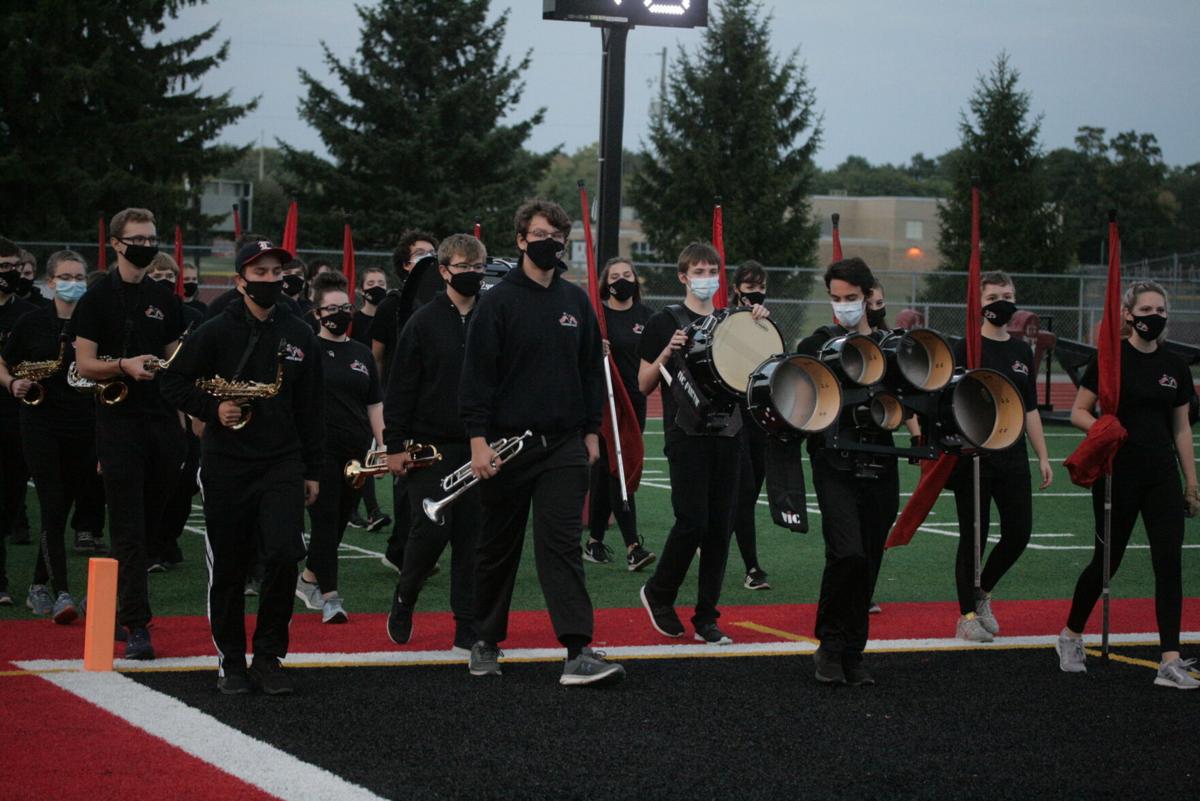 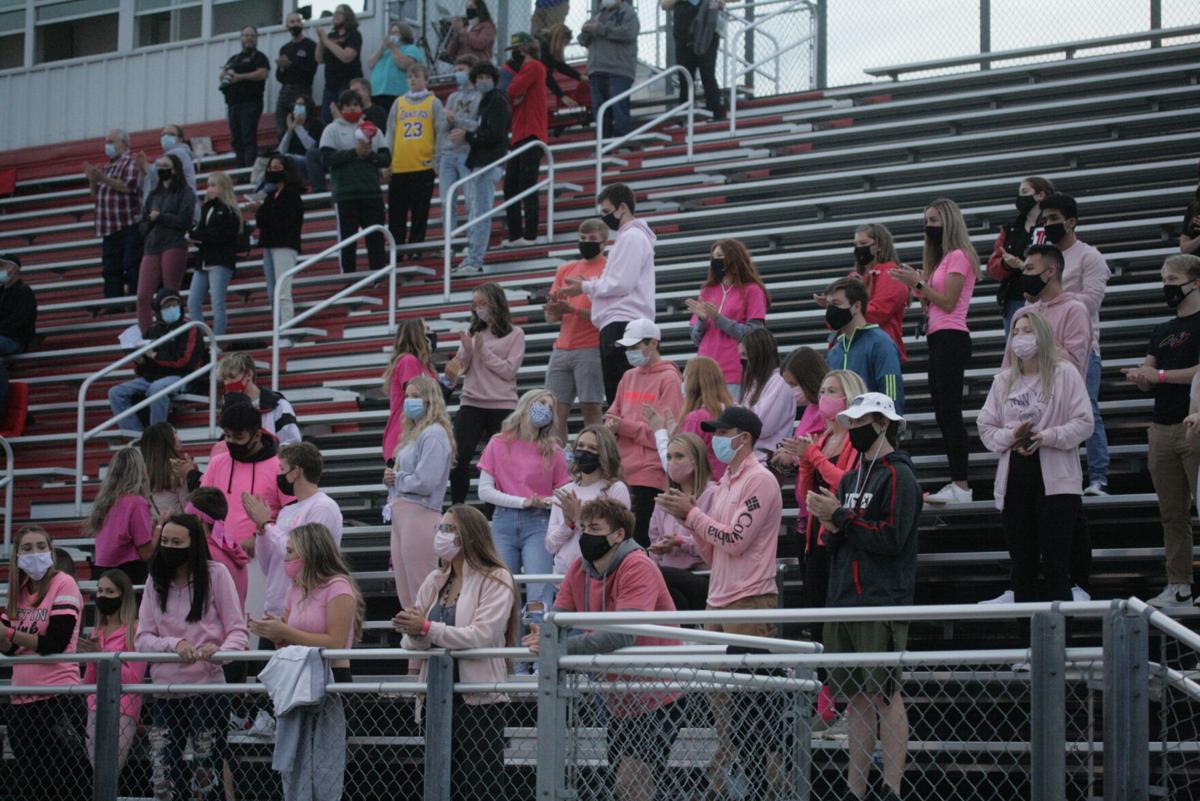 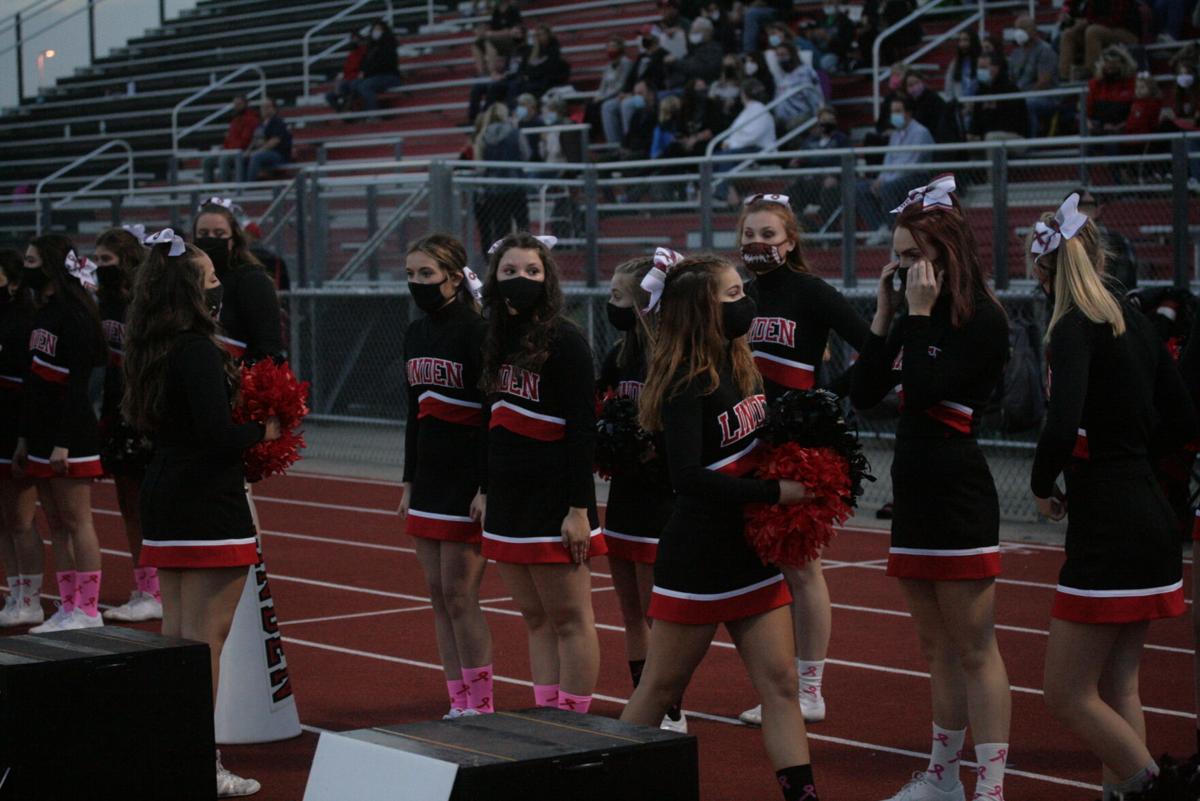 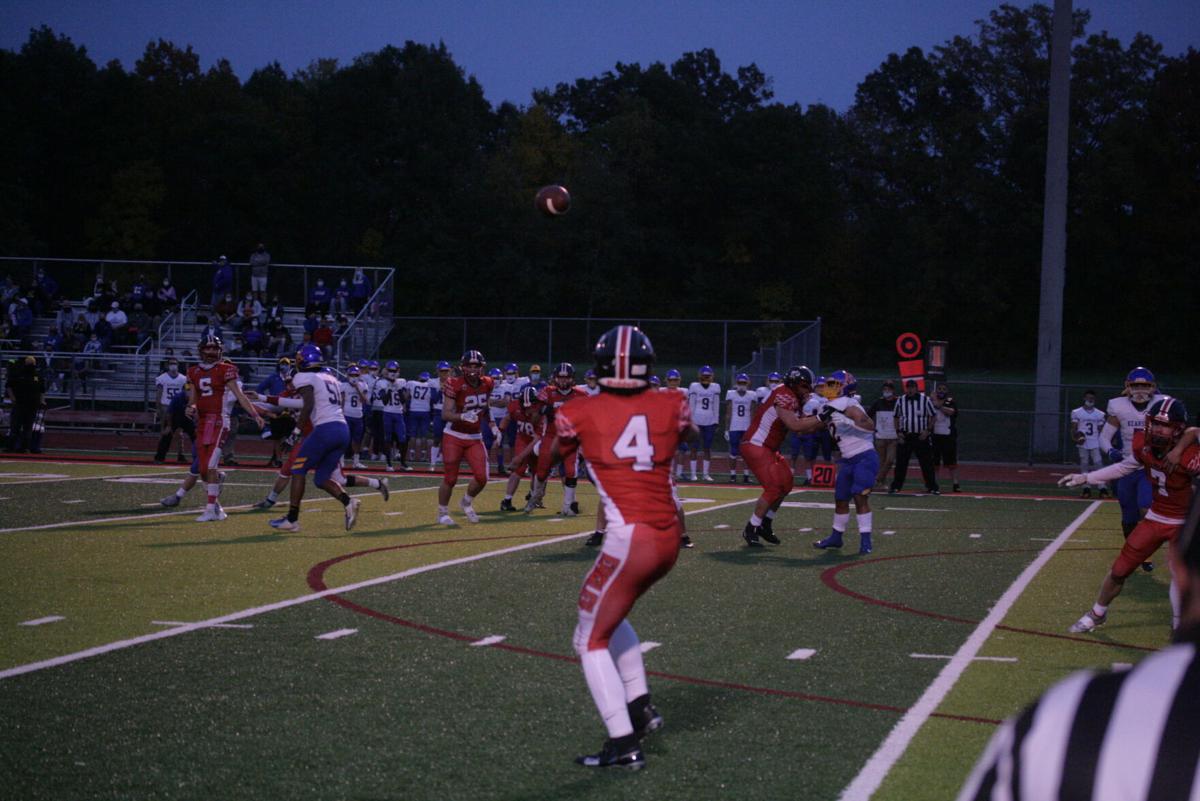 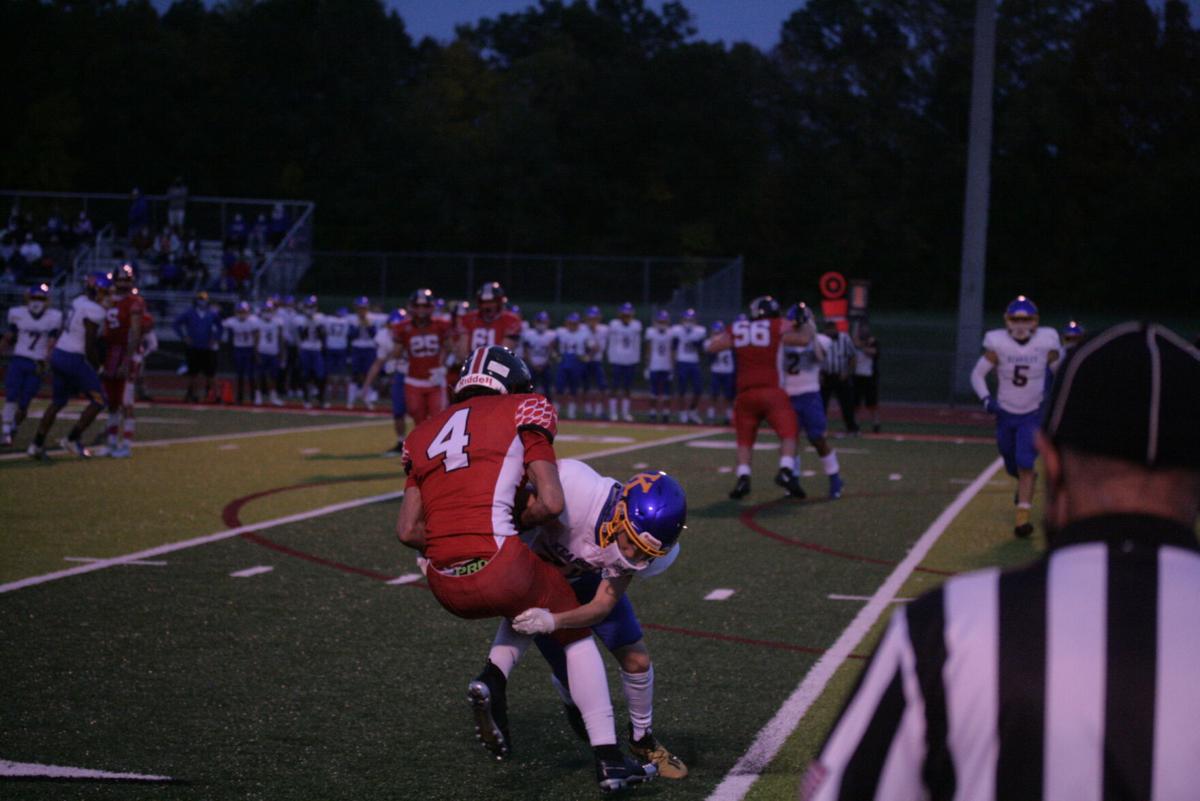 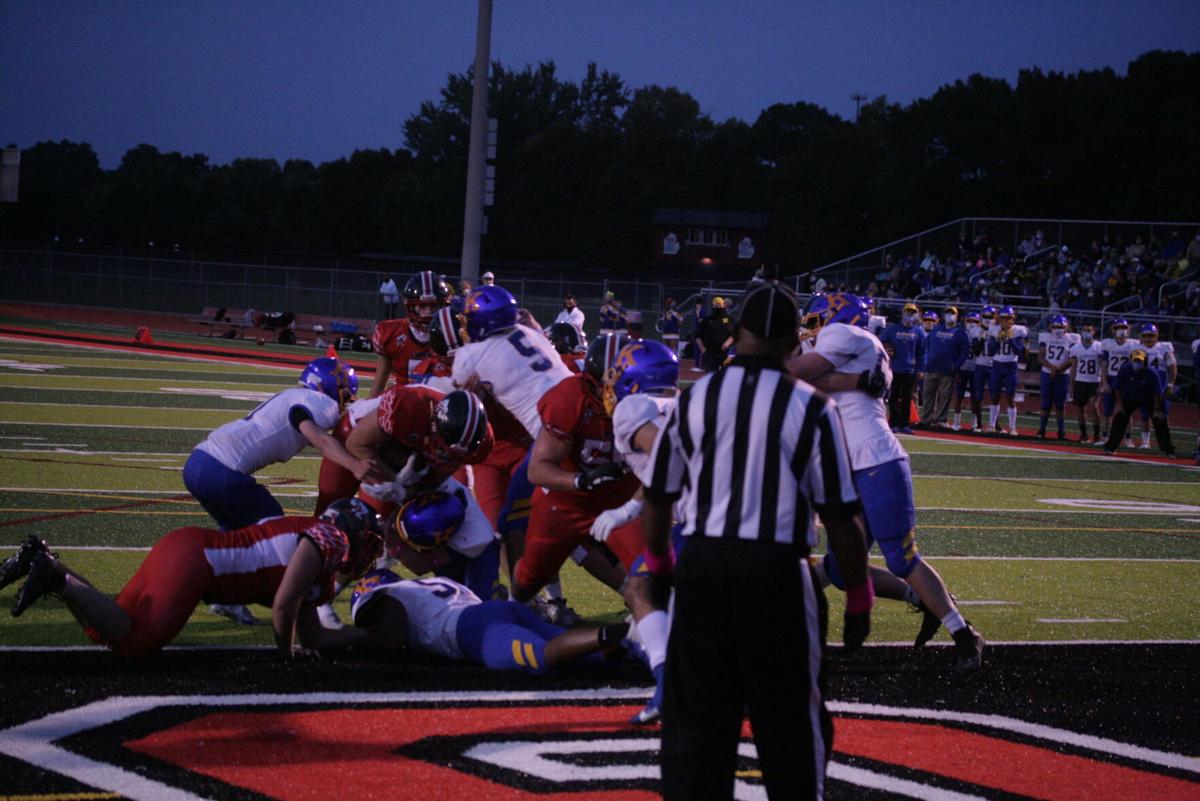 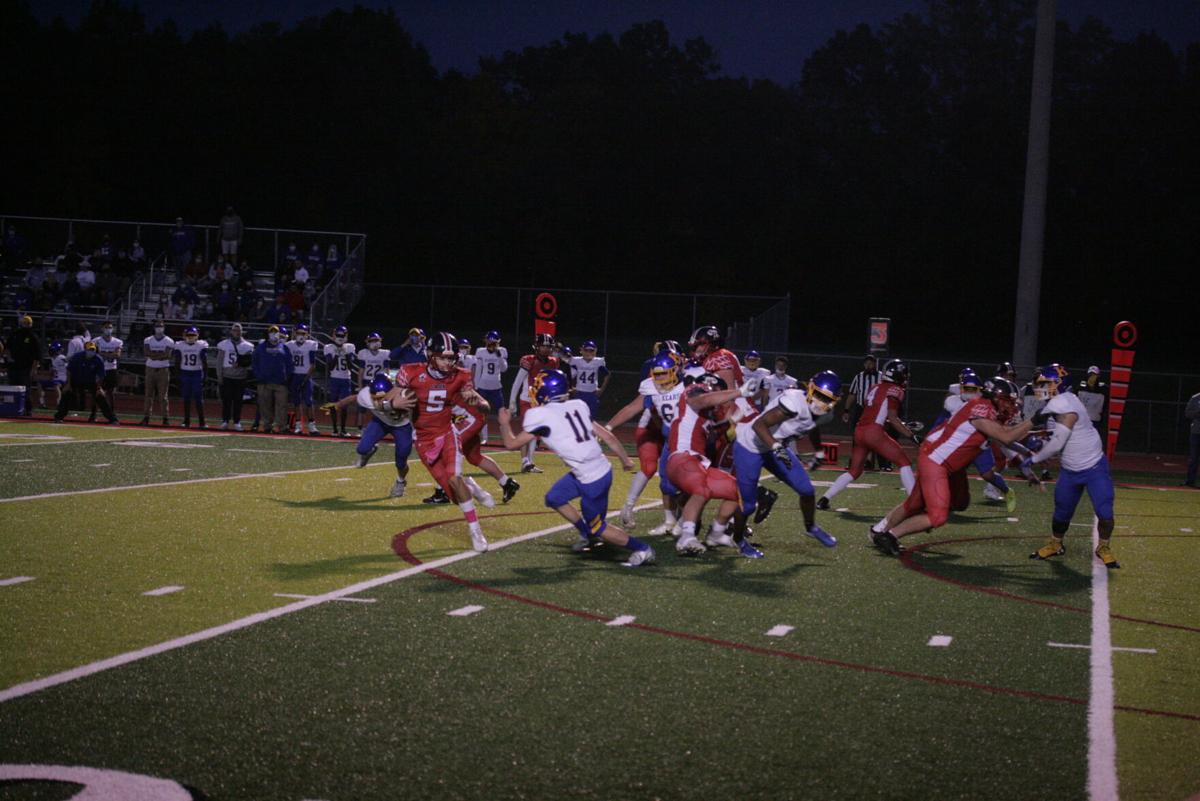 Linden’s Bryce Eliuk (left) scores one of his four touchdowns in the Eagles’ 43-22 victory against Kearsley.

Linden — It was a game a little different than any other the Eagles have played this year.

Due to the loosening of the state’s COVID-19 restrictions, there were a few more people at Linden’s varsity football game at home against Kearsley than any other game this season.

The band made its first appearance and there were some extra tickets for the senior class. The cheerleaders, who have been able to attend games, were also there. And at the end of the game, when the Eagles won and earned the right to sing their fight song, there were students to sing it to.

All of these scenes were nice ones to see. But while these other stories around the game were positives, the biggest plus was the Eagles’ play. The Eagles rebounded from a tough loss to the Fenton Tigers last week, earning a 43-22 victory. No one had a better day than running back Bryce Eliuk. Eliuk ran for 112 yards and four touchdowns in just nine rushes during the team’s victory. He loved seeing the fans.

“It’s nice to have them back,” Eliuk said. “It’s really nice. It gets us going. Team morale is up and we’re just scoring touchdowns.”

Eliuk was scoring touchdowns. That’s for sure. The Eagles’ defense set up the first Linden score when Wyatt Gocha forced a fumble and it was recovered by Brandon Green. Starting possession at Kearsley’s 30, the Eagles had a 13-yard run by Gavin Wildeman and completed a 10-yard pass to Austin Jaworski setting up Eliuk’s first TD, a one-yard plunge. Carson Kelley made the first of his seven extra-point kicks, giving the Eagles a 7-0 lead.

Linden’s defense forced another turnover on Kearsley’s next possession.

Luke Gorkiewicz recovered a Kearsley fumble at the Linden 37. Ten plays later, Kelley converted his first of two field goals, nailing a 22-yard attempt and giving the Eagles at 10-0 lead.

The Eagles continued to dominate. On their next possession, Gavin Wildeman scrambled for 14 yards and completed a 41-yard screen pass to Eliuk, setting up Garrett Wagner’s five-yard TD scamper around the right side. Linden led 17-0 with 7:55 left until halftime.

The Hornets made a strong comeback at that point. Kearsley drove 80 yards in 11 plays, scoring on a 33-yard run by Braylon Silvas. The Eagles still led 17-6 and kept that lead into the half. Kearsley had another long possession to start the second half. The Hornets drove 80 yards in 14 plays, scoring on Silvas’s one-yard score. Linden led just 17-14 with 4:18 left in the third quarter.

“There really wasn’t a gap so I just bumped it to the outside,” Eliuk said about his 64-yard run. “I took off for my left, kept running but I got caught. But we made it happen on the next play.”

The onslaught continued. Another Kearsley turnover set up another Eagles’ TD. This fumble was forced by Cooper Conn and recovered by Gorkiewicz at the Kearsley 36. A 35-yard reception from Wildeman to Seth Schuyler set up Eliuk’s one-yard TD run. The Eagles led 31-14 with 2:33 left in the third quarter.

In the fourth quarter, the Eagles continued their trend of 26 unanswered points. Eliuk’s final TD came on a 32-yard run. Linden led 38-14. Linden’s defense scored the next two points when a bad snap by Kearsley resulted in a safety, upping the lead to 40-14. The Eagles capped their scoring about six minutes later with a 47-yard field goal by Kelley. Linden led 43-14 with 2:15 left in the contest. Kearsley scored an inconsequential six-yard TD run by Isaiah Stiverson.

“Oh yeah, it was a good game,” Linden varsity football coach Denny Hopkins said. “The start of the week we wondered how the kids would respond after losing a tough one last week – playing as well as we did and losing it at the end. We had a couple of good practices, and a couple of bad of practices. We got great leadership out of our seniors the last 24 hours and I think it really did a number. The captains pulled the whole team together.”

The Eagles are now 2-2 with a road game at Holly coming up Friday.