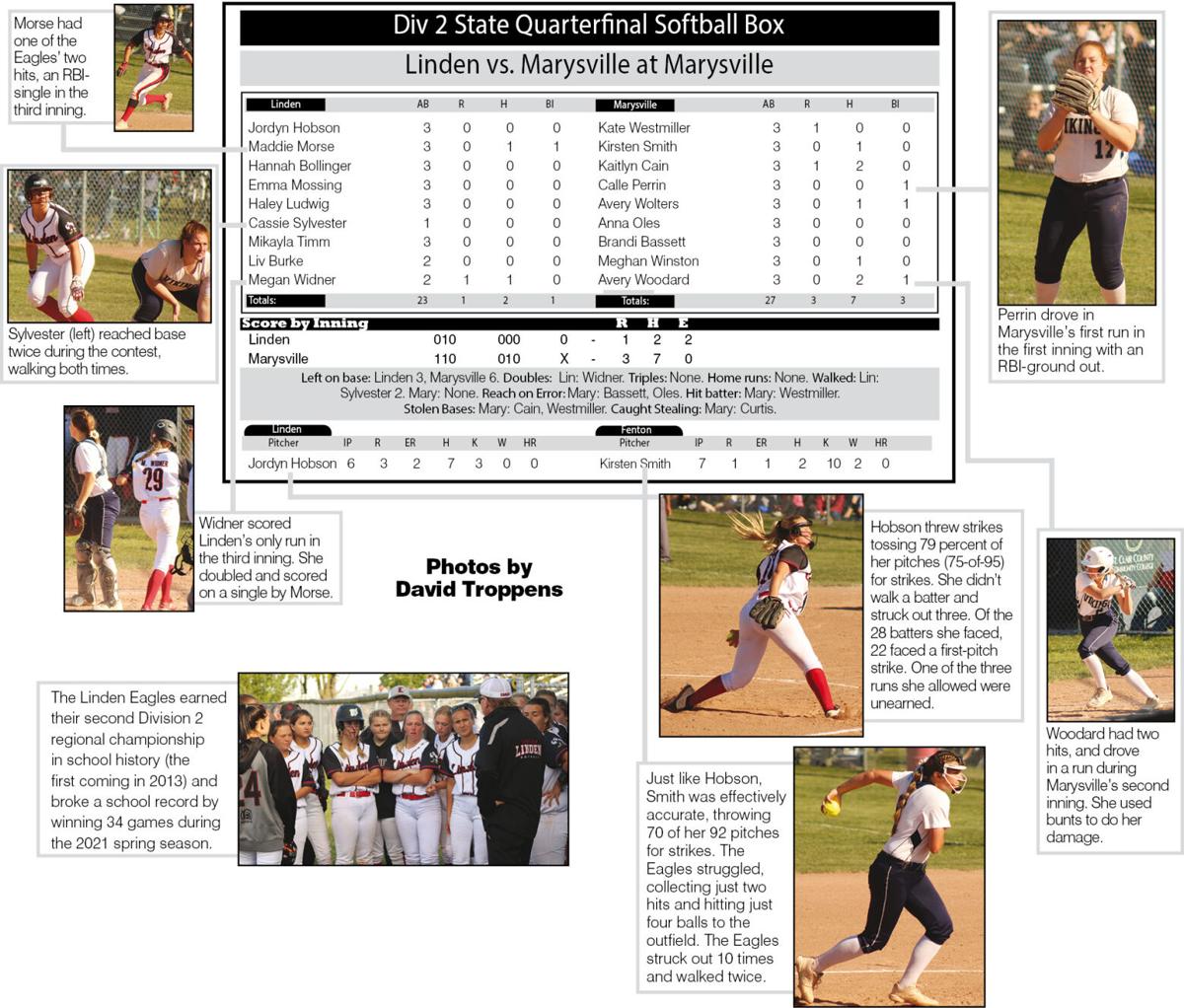 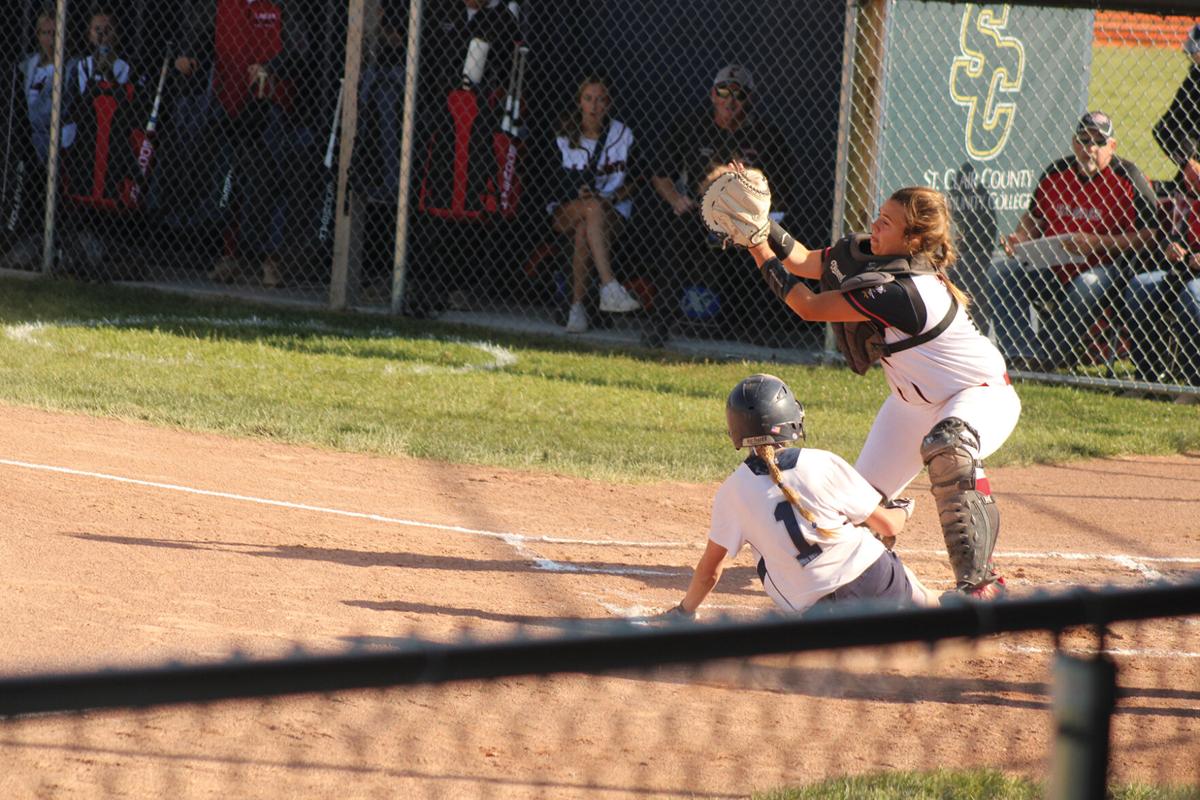 Marysville — The Linden varsity softball team’s bats have led the Eagles to some lofty standards during the 2021 season.

However, with the aid of Marysville pitcher Kirsten Smith, the bats were silenced during a D2 state quarterfinal contest at Marysville State Park, resulting in a tough 3-1 loss for the Eagles.

The Eagles (34-8) were limited to just two hits, and the one run represented only the third time in 42 contests this season. Meanwhile, the Vikings, who were playing a home game in front of a large crowd surrounding the softball field, were able to manufacture three runs against the Eagles using their short game.

“That’s pretty much how they got their runs and we usually answer back with runs,” Linden varsity softball coach Gordon Jamison said. “The Marysville pitcher pitched a good game. She was hitting her spots. A couple of our hitters seemed to struggle with her. They either had a bad day themselves or they struggled with her or a combination of the two. They’ll usually hit good pitching and make pretty good contact. Usually we make more contact.”

The contest ended up being a pitchers’ duel between the Eagles’ Jordyn Hobson and Smith. However, the Eagles seemed to come out a little nervous in the opening inning and Marysville took advantage. After the Eagles went out in order in the top of the first inning, Marysville’s Kate Westmiller was hit by a pitch. She stole second and advanced to third base on a single by Smith. Calle Perrin followed with an RBI-ground out, plating the game’s first run. The Vikings led 1-0 to the approval of their large crowd.

The Eagles earned their first baserunner in the second inning. It came when Cassie Sylvester walked with two out. However, she remained there after a strike out as the other three Eagles batting that inning struck out. In fact, five Eagles struck out the first time through the batting order.

Marysville scored a second run with the aid of a Linden error in the second inning, with the Vikings using the short game to earn that run. Anna Oles bunted and reached base on an infield single. Brandi Bassett followed with a batted ball to the infield that was booted putting runners on first and second with no out. Meghan Winston bunted for a single and loaded the bases with no out. The run was scored when Av-

ery Woodard hit into a fielder’s choice play. The Eagles went for the out at home but were unable to get the out, resulting in a 2-0 lead with the bases still loaded and no out. Amazingly, Hobson was able to work out of the jam without another run scoring. An infield fly out, a strike out and a ground out ended the inning, allowing the Eagles to trail just 2-0.

Linden’s only two hits of the contest came in the third inning. After an out, Megan Widner hit a double to right centerfield. A ground out by Hobson moved Widner to third, and she scored on a bunt single by Maddie Morse. A ground out ended the threat, but the Eagles were now within a 2-1 margin and were starting to look a bit more comfortable.

However, from there, Smith only became stronger on the mound. After Morse’s single, Smith retired the next 12 batters. Hobson was nearly as effective, only allowing one more run in the fifth inning, and, again, the short game helped score the Marysville run.

A bunt single put Smith on first, but courtesy runner Emma Curtis was gunned out at second base by Linden catcher Hannah Bollinger for a caught stealing. Cain continued the inning with an infield single. She moved to second on a ground out and stole third. She scored on Avery Wolters’s single to center, the only batted ball to leave the infield during the inning. Marysville led 3-1.

Linden had one more chance in the seventh. With two out, Sylvester earned her second walk against Smith, and Mikayla Timm followed with a batted ball that was almost a double, putting runners on second and third, but the call was a foul ball. A strike out ended the inning and the game.

“I knew we could’ve done better, but we left everything out there,” Linden senior Emma Mossing said.

Smith tossed 70 of her 92 pitches for strikes, getting a first-pitch strike to 19 of the 25 batters she faced. She struck out 10 batters, walked two and tossed a two-hitter.

Hobson threw 75 of her 95 pitches for strikes and struck out three batters while walking none. She allowed seven hits.