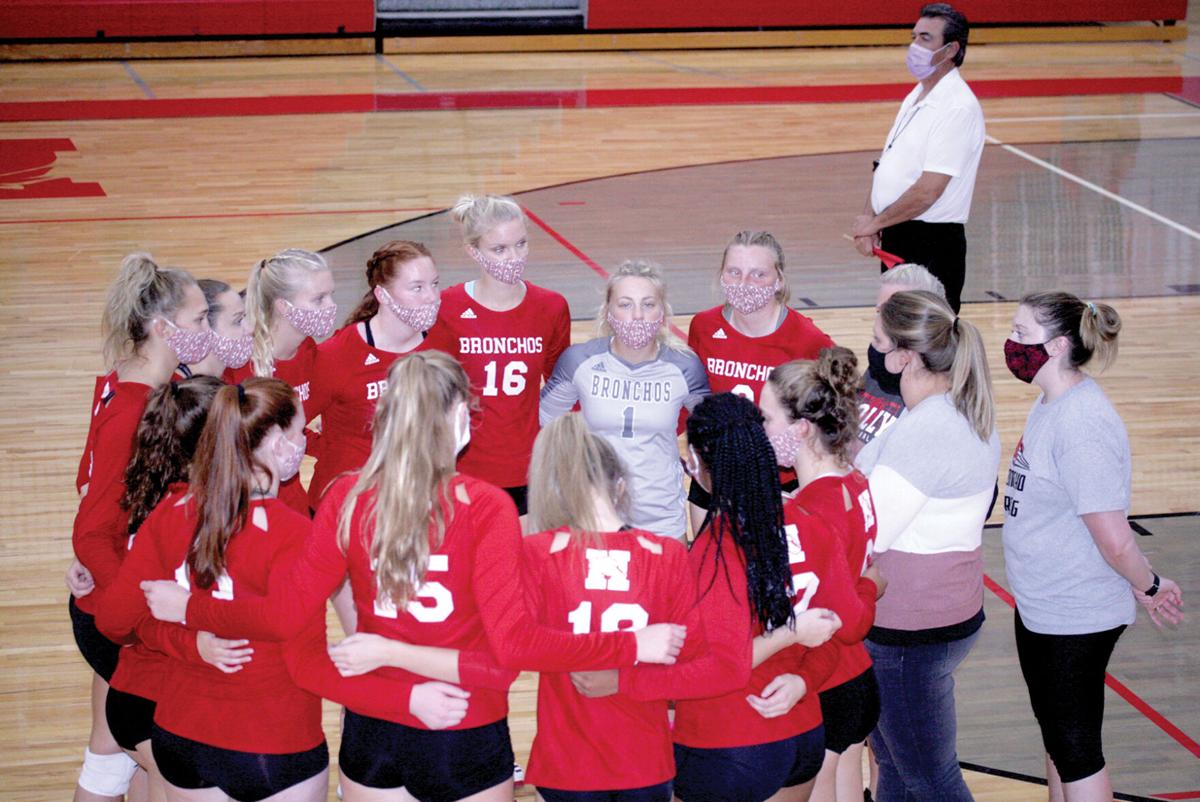 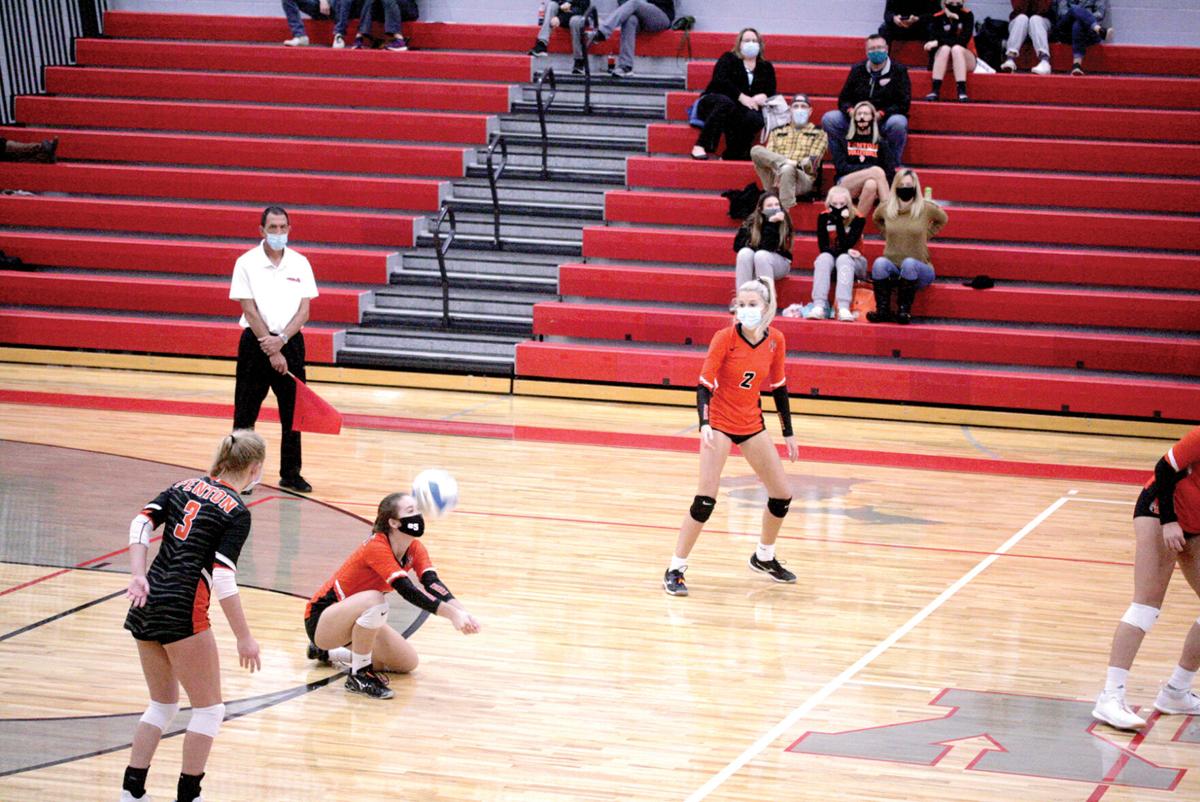 Fenton’s Emily Starr makes a dig in the Tigers’ loss to Holly. 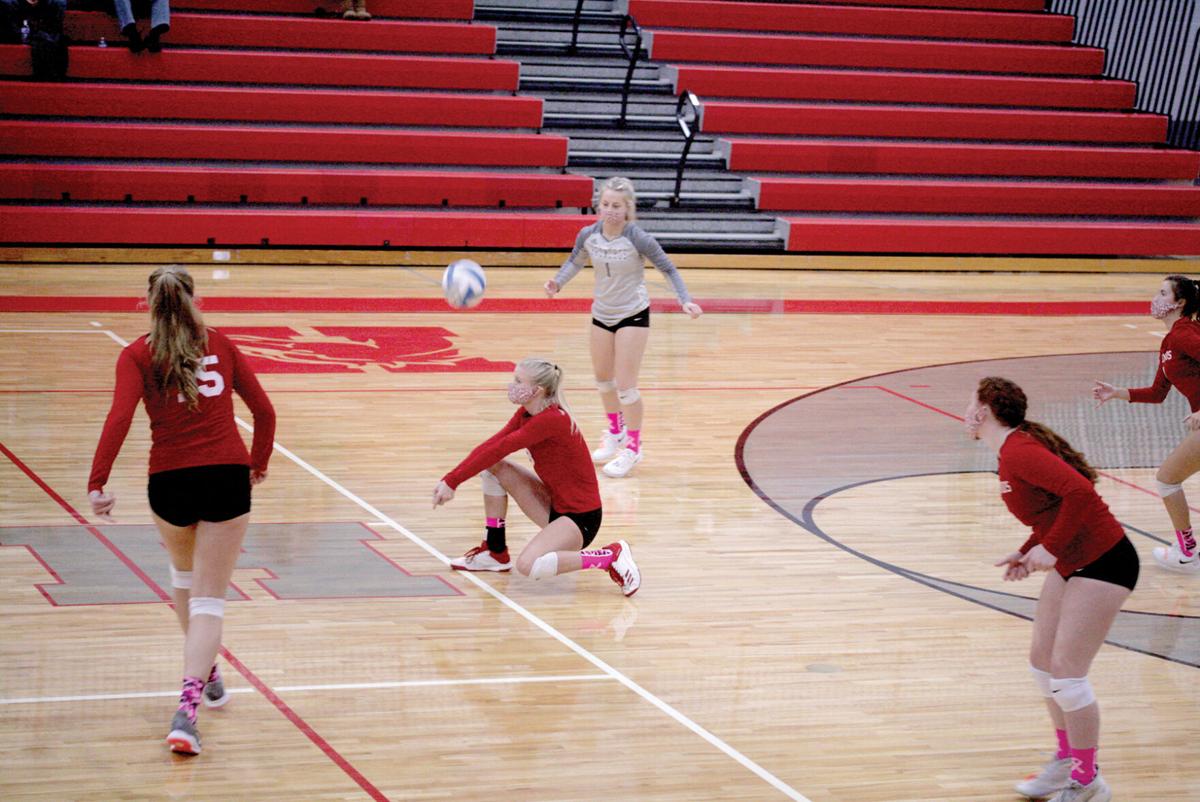 Sarah Jewell makes a dig in Fenton's loss to Holly.

Fenton’s Emily Starr makes a dig in the Tigers’ loss to Holly.

Sarah Jewell makes a dig in Fenton's loss to Holly.

Holly — In Metro League history, the Holly Bronchos have never won an outright championship in volleyball.

The Bronchos have just two championships to their name. Holly shared the title with LakeVille during the 1993-94 school year, and shared the Metro League Stripes Division crown with Flushing last season.

This season has the possibility of being the first. Holly captured another big victory in the pursuit of that goal by defeating the Fenton Tigers in three sets 25-15, 25-20, 25-11. The win keeps the Bronchos (6-0) undefeated in Metro League Stripes Division play, one game ahead of the Flushing Raiders. The Raiders are the only team that has a realistic shot at catching the Bronchos. Fenton fell to 3-3 in league play with the loss. And for the Bronchos, it’s always nice to beat the Fenton Tigers.

“It’s always a big rival so we know we have to work even harder because we want to beat them really bad,” Holly senior Paige Weeder said. “We know we have to come together and play as a team and we won.”

The Bronchos started out a little slow in the opening set, but it didn’t matter too much because the Tigers did as well.

Holly had hitting errors on the first two points of the set, but the Tigers followed that with a service error and a hitting error of their own.

The service error gave Holly’s Nicole Jewell the service and she responded with five straight points. The final two came on back-to-back kills by Kennedy Hogan, the second coming on an overpass kill. Holly led 7-2 and never lost the lead. Holly led only 15-10 until back-to-back-to-back kills by Weeder, Hogan and Amanda Patterson gave the Bronchos an 18-10 lead. Match point eventually came on a Fenton service error, the fifth the Tigers had in the set.

The second set was the most competitive of the three as Fenton enjoyed a 4-3 lead after a kill by Paris Whitney and then a 5-4 lead after a Holly serice error. However, a kill by Holly’s Marissa Walker gave the Bronchos the lead and the Tigers would never lead again. A service run of six straight points by Sarah Jewell bumped Holly’s lead to 11-6. Fenton cut the gap to just 15-14 after a kill by Grace Pierle, but a tip kill by Holly’s Amanda Patterson gave Holly’s Mary McAninch the service and she rattled off five straight points. By the time a Sarah Jewell kill capped the run, Holly led 21-14. Fenton tried to battle back late, cutting the margin to 24-20 on a kill by Jordyn Bommersbach, but Walker iced the Holly set victory with a kill.

The third set was all Holly as the Bronchos scored the first four points of the game with kills by Hogan, Macy Martin and Weeder sparking the run.

Fenton cut the Holly lead to just two a handful of times and still only trailed 14-11 after a kill by the Tigers’ Adrie Staib, but Weeder responded with a kill, giving her the service.

She never lost it the rest of the match, scoring 10 straight points. Three of the points came on aces and four on Holly kills.

“I liked our perseverence,” Holly varsity volleyball coach Deena Maher said. “Most of the girls started in school this week and a lot of the seniors took the SAT today so I think it may have depleted a lot of their energy. Even though we had a tough game, we pushed through and they stayed positive all the way through so I was very grateful for that.”

Sarah Jewell led a balanced offense with nine kills while Hogan had eight kills and Weeder had seven kills. Walker and Nicole Jewell had five kills each. Jewell also was the setter who quarterbacked the potent attack. Sarah Jewell and Weeder had three aces each as Holly had 10 aces.

“We started off really strong and we are coming off last year doing really well in the league,” Weeder said. “We want to do well this year too, so we worked really hard. We had some challenges and struggles but we just worked through them and played as a team.”

Fenton struggled most of the match and the Tigers’ stats reflected that. Fenton had 16 kills and 15 hitting errors and also had five service errors. Only Pierle had as many as six kills while Korryn Smith had three kills.

“We just got to keep progressing forward,” Fenton varsity volleyball coach Jenna Long said. “We had two starts out today which affected us immensely but it was an off day for them. ... We have to work on communication and wanting the ball. We didn’t attack today at all. We did a lot of rolls and tips. We have to hit the ball. We can’t give them free balls or they’ll shove it down their throat which you saw. There is a lot to improve on. This was probably our worst game.”

The Bronchos are dominating Metro competition, but now there are two major goals — winning a Metro title and progressing through the state tournament series.

“We are in a good place,” Maher said. “So far we’ve done well in the conference and we’ve struggled against the tougher teams in the area so it’s a good balance of having success and also learning at the same time. I think the girls are treally open to learning and pushing ourselves that way.

“We need to work on our consistency. ... We need to work on staying consistent the entire time and playing well every day. They’ve come very close to beating some really close teams but we just can’t seem to get over that edge yet so we are hoping coming up we can.”