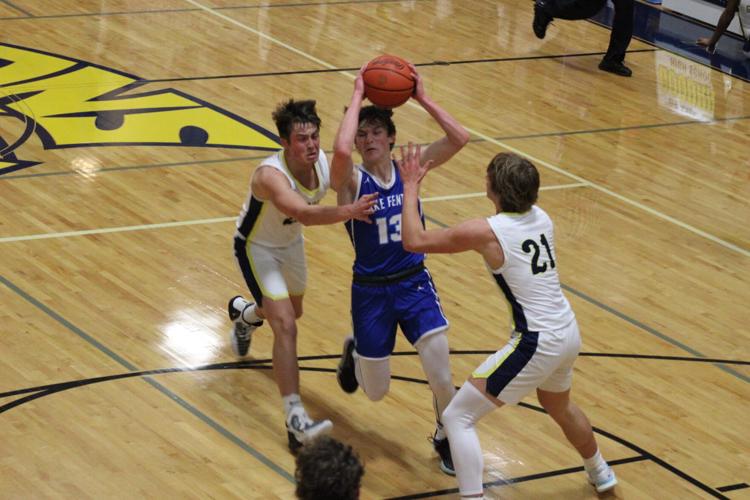 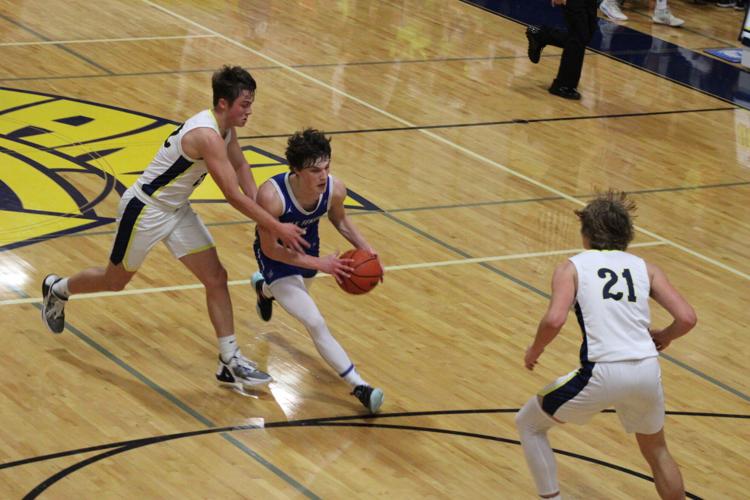 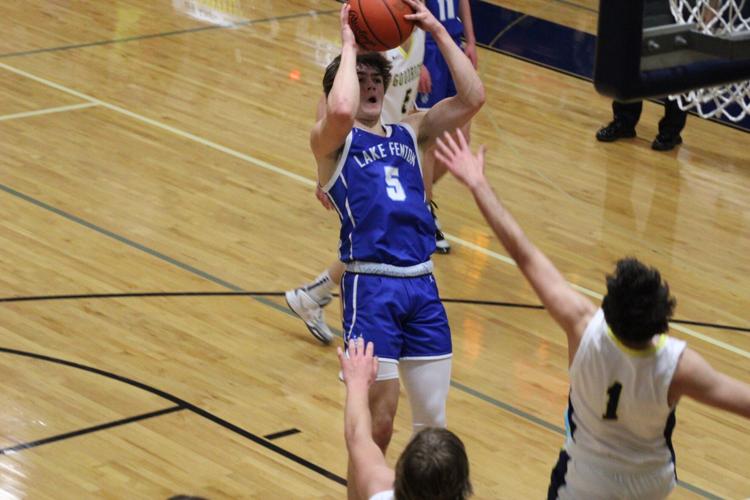 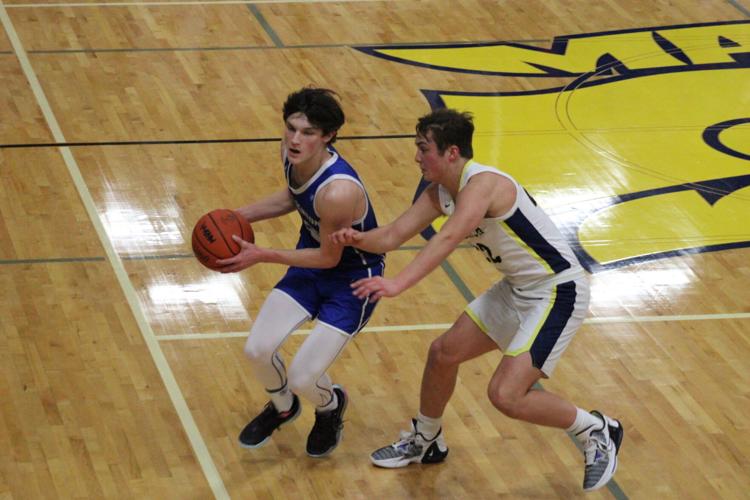 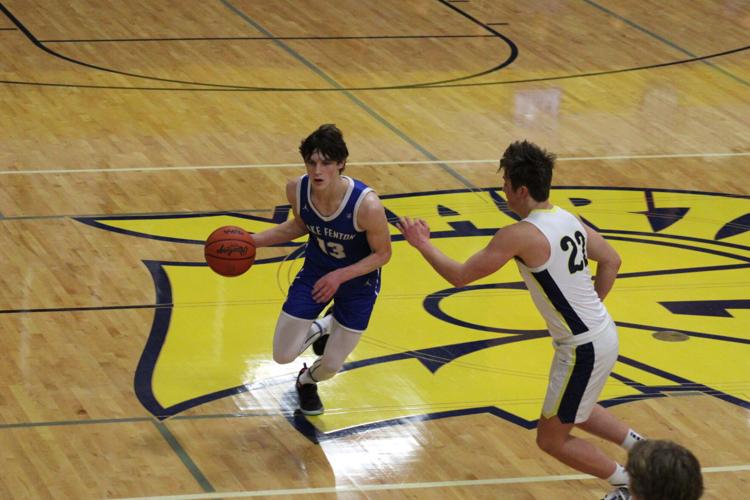 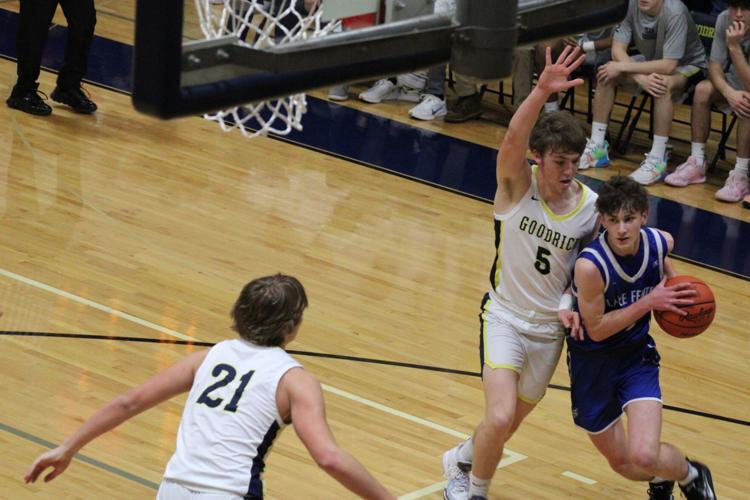 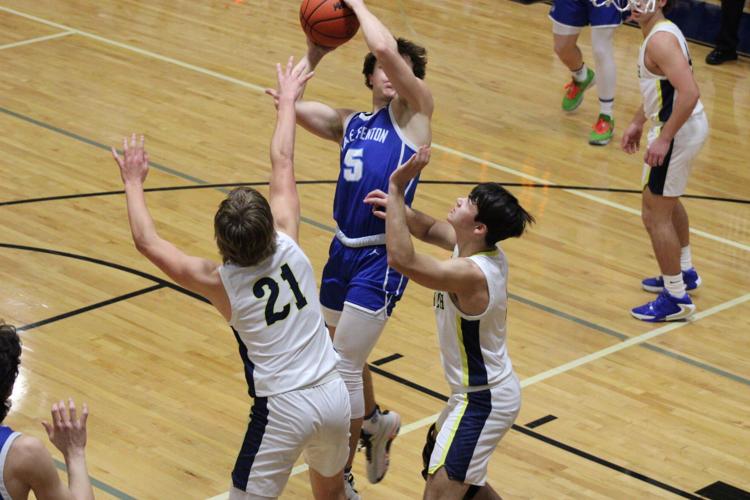 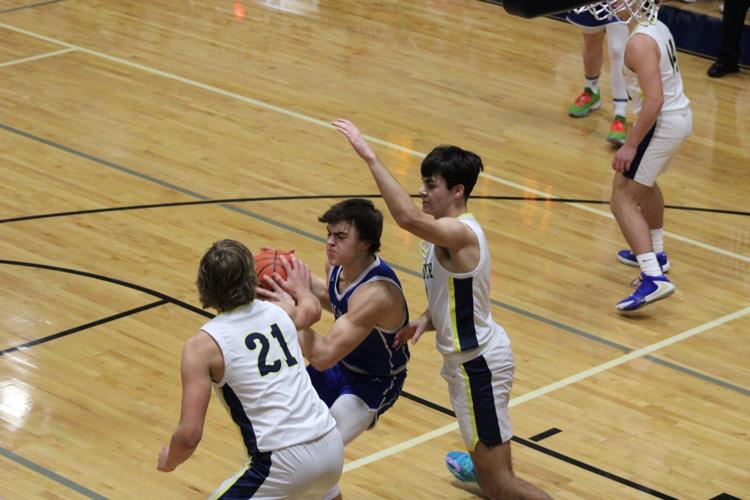 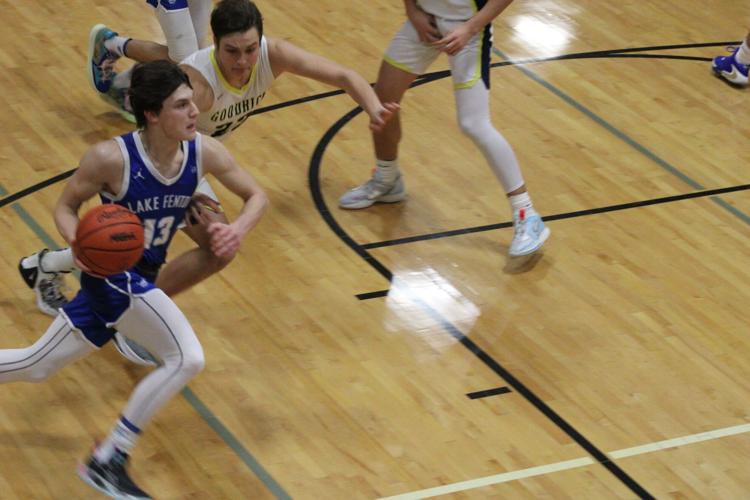 In front of a standing-room-only crowd at Goodrich High School, Teffner’s three-pointer broke a 61-61 tie in overtime. Once in the lead, the Blue Devils never lost it again during the four-minute extra session, earning a 73-65 Flint Metro League Stars Division victory.

The Blue Devils, who now are in a three-way tie for first place in the Stars Division with Goodrich and Corunna, still had some work to do after Teffner’s trey with 2:14 left in the extra session. The Blue Devils (4-1 in the Stars Division and 8-4 overall) iced the victory, making 7-of-10 free throws after that hoop. Junior Ashton Hunter made six of those free throws, which was fitting. After all, it was his two converted free throws with 23.89 seconds left that tied the game in regulation and forced overtime.

The free throws were set up by a steal by Brandon Bossert. The steal set the Blue Devils on the break. Bossert passed the ball to Hunter, who was fouled driving to the bucket. He promptly made both free throws.

“It was all about being calm,” Hunter said. “They were coming back and we just had to settle in and play our game. I just had to focus on the free throws.

“It’s huge. The atmosphere was crazy here. We haven’t won her in a very long time. It feels amazing.”

Really, it felt like the Blue Devils were going to win the contest in regulation. They controlled the lead for the overwhelming portion of regulation. Lake Fenton took its first lead on a conventional three-point play by Jett Husted at 7-4. From that point on, Lake Fenton enjoyed the lead for just about the rest of the game. Husted finished the first quarter with five points and helped lead the Blue Devils to a 15-10 first-quarter lead.

A tip-in putback by Carson Haddad was followed up by a small jumper by Brady Belcher early in the second, and Lake Fenton led 19-10. The Martins were able to cut the deficit to as little as 25-22 on a hoop by Caedoen Rossell, but a conventional three-point play by Haddad upped the Lake Fenton lead to 28-22 at halftime.

Goodrich got as close as 36-35 after a hoop by Zack Lagat, but that’s as close as the Martians would get in the third quarter. A Coleson Lessner dish to Bossert resulted in a layup, as Lake Fenton led 46-41 entering the fourth

Lake Fenton opened the fourth 10-4 run, raising the Blue Devils’ lead to 56-45 after a driving layup by Lessner with 4:00 left. It seemed Lake Fenton was about to put it into cruise control and earn the victory in regulation. However, the Blue Devils failed to score on nine consecutive possessions as Goodrich went on a 13-0 run. A driving layup by Jack Locey gave Goodrich its first lead since early in the first quarter at 58-56 with 1:24 left in regulation. however, Bossert’s steal and Hunter’s free throws made sure the Blue Devils forced overtime.

“It’s a big game,” Hunter said. “You saw the gym today. The gym was packed. There weren’t enough seats for everybody. ... This showed us that we can play with anybody in this league. The only team that has beat us so far is ourselves.”

“This win feels a little extra special,” Lake Fenton varsity boys basketball coach Tyler Szczepanski said. “This environment — you don’t get this very much in high school basketball games with the bigger gyms nowadays. There’s something intimate about this space that feels good to play in. ... You come to places like this and hate it at first because the teams are really good and you can’t win, but to win in this environment is something we wanted to do. And to make winning plays at the end of the game when we felt we were the better team — and the game flow outside the last four minutes (of regulation) will show that. This is a heck of a program over here. We’ll see them again, and we’ll have to continue to get better ourselves.”

Hunter led the Blue Devils with 16 points while Bossert finished with 13 points. Haddad and Lessner had 12 and 11 points, respectively. Locey led all scorers with 24 points. Landon Williams and Rossell had 12 points each.