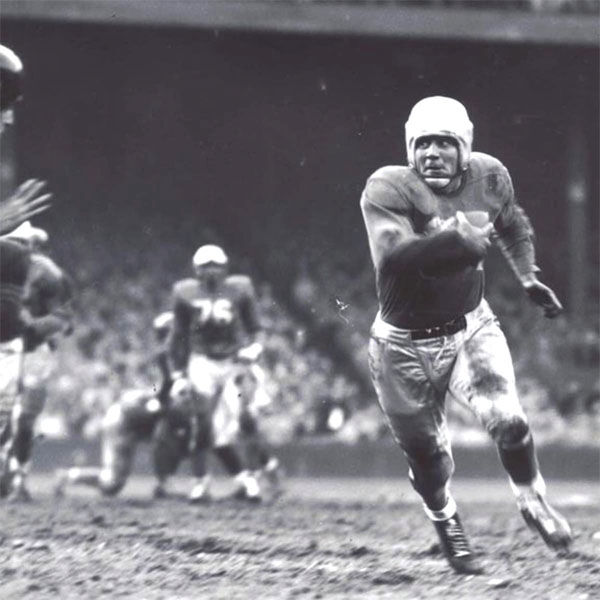 Bobby Layne talks to Detroit Lions coach Buddy Parker during a contest during the 1950s.

Bobby Layne talks to Detroit Lions coach Buddy Parker during a contest during the 1950s.

The Lions were in a logjam entering their annual Thanksgiving Day Game at Briggs Stadium in 1952.

The Detroit Lions, who hadn’t won an NFL Championship since 1935, had their fans hungry for one.

In 1951, the Lions were 6-2-1 entering the final three weeks of the season after defeating the Green Bay Packers 52-35 on Thanksgiving Day. However, the playoff run ran short as the Lions lost two of the final three games (both to San Francisco), falling a half-game short of winning the National Division by a half-game to the Los Angeles Rams.

Entering the ninth week in 1952, the battle for the Western Conference title was as tight as ever as Detroit, Green Bay, Los Angeles and San Francisco were all tied at 6-3 with three games remaining. Certainly, 1952’s Thanksgiving game was going to play a huge role in determin-ing the Western Conference champions.

The contest was played on a cold day during a dusting of flurries. But that didn’t keep 39,101 from attending the contest with the Green Bay Packers. Early on, it was a tight contest. Detroit opened with a 26-yard field goal by Pat Harder, but Green Bay answered back with a 37-yard field goal of their own.

The Lions were led by their unquestionable leader and starting quarterback Bobby Layne. Layne was known for his southern drawl voice and for partying as hard on off days as he played hard on football fields during the weekends. He helped lead the Lions to three TD passes in the second quarter. Cloyce Box caught the first from five yards out, and soon after that, Leon Hart caught a nine-yard TD strike. The Lions led 17-3.

The Packers, led by starting quarterback and future Detroit Lion Tobin Rote, cut the lead to just seven with a six-yard pass from Rote to Billy Howton. However, Layne then hit Box for a 33-yard TD strike, lifting the lead back to 24-10. The second-quarter offensive craziness wasn’t over quite yet. Howton caught a four-yard TD pass from Rote, cutting the Lions’ lead to 24-17 at halftime.

In the second half, the Lions’ defense stiffened as the offense continued to remain hot. The Lions would force six turnovers (four on fumbles and two on interceptions), helping Detroit take control. Box caught his third TD pass of the contest. This time it was a halfback option pass from Bob Hoernschemeyer. These tactics were used frequently during the run-dominated 1950s. The Packers fought back as Howton caught his third TD pass of the game from Tobin Rote, this one a 54-yard strike, cutting the gap back to 7 at 31-24.

However, the Lions outscored Green Bay 17-0 in the fourth quarter. It started with a Harder 26-yard field goal, lifting the lead to 34-24. Harder, who collected just eight rushing yards on seven attempts, would score the next Lions’ TD on a one-yard run. The Lions led 41-24 after Harder’s PAT. And, finally, the Lions scored again with back up quarterback Jim Hardy leading the charge late in the fourth. He tossed a six-yard TD pass to Leon Hart. The Lions led 48-24 and would win the game by that margin, putting them 1/2 game ahead of idle Los Angeles and San Francisco.

The race would remain tight the rest of the season, but just between two teams. The Rams would defeat San Francisco on Sunday 34-21, placing the Lions and Rams atop the conference at 7-3. Both the Rams and Lions won the next week and now led Green Bay and San Francisco by two games in the standings, making it a two-team race with one week left. However, the Lions defeated the Dallas Texans 41-6 and the Rams defeated the Pittsburgh Steelers 28-14, setting up a tiebreaking playoff game for the Western Conference championship the following week.

Played in front of 47,645 fans at Briggs Stadium (later known as Tiger Stadium), the Lions won the contest 31-21. Detroit led throughout, but it wasn’t until Hoernschemeyer’s nine-yard TD run in the fourth quarter that the game was decided.

A week later, the Lions had their first NFL championship since 1935 when they defeated the Cleveland Browns 17-7. It would be the first of three championships during the 1950s.