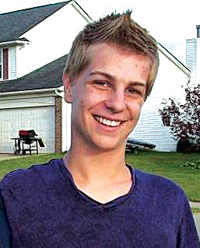 His family links the suicide to bullying and wants to share the message of love and acceptance. 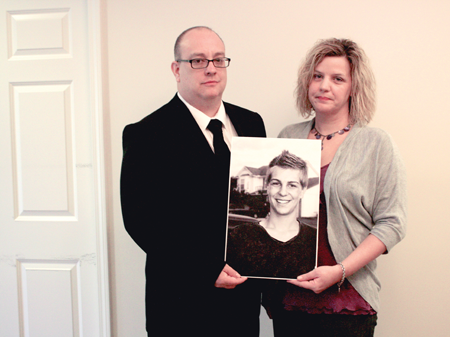 His family links the suicide to bullying and wants to share the message of love and acceptance.

His life began on Oct. 24, 1995. His name was Josh Pacheco, and he was a 17-year-old junior at Linden High School. He was an artistic young man who enjoyed singing, dancing, drawing and acting. He even landed a few major roles in plays like ‘Annie Jr.’ and ‘Nifty 50s.’ He listened and sang along to ‘Crazy’ by Gnarls Barkley. He read books like ‘Dante’s Inferno,’ ‘Lord of The Rings’ and ‘Divine Comedy.’

He was a member of S.A.D.D (Students Against Destructive Decisions), an anti-drug and alcohol group for students and as far as his family knew, Pacheco had no problems with depression.

Pacheco’s life ended the morning of Tuesday, Nov. 27, when he committed suicide.

“He was very sensitive, to others’ needs and feelings but also to his own,” Pacheco’s mother, Lynette Capehart, said. “He gave his whole self fully to any person he could.”

Pacheco’s family said that he suffered from low self-esteem. This low self-esteem, they said, coupled with Pacheco’s problems at school led him to suicide. A goodbye status on Facebook was the last anyone heard from him.

“He told me he felt like he wasn’t good enough. He said if he lost weight he would be happy,” Capehart said. “But he wasn’t. Then he said if he came out [as a homosexual], he would be happy. Then it was if the kids at school stopped teasing him. He came to me and said he still didn’t feel happy. I realized then it wasn’t something, being a mom, that I could fix.”

Capehart said that they scheduled an appointment for Pacheco to talk to a professional. He committed suicide before he could attend.

“Josh would never give us names. He was so intimidated by these kids who picked on him,” David Pacheco, Josh’s father, said. “If he would have given me or the school details, we would have handled it. Don’t be afraid to speak out. You need to tell people what’s going on.”

David Pacheco believes that if his son had spoken up about his bullying problem, he would still be here today. He encourages any person dealing with bullying to tell someone.

“You can’t judge a person on their orientation. You have to judge them by who they are. This is what intolerance and hate leads to. His spirit and his self esteem were crushed,” David Pacheco said. “This is what bullying can lead to.”

According to stopbullying.gov, warning signs that a child is being bullied can be anything from unexplainable injuries, nightmares, a decline in grades, and a loss of self-esteem. They also report that homosexual teens are at a greater risk of being bullied.

“There was never anything wrong with Josh,” Tiffani Pacheco, Josh’s sister, said. “But people acted like there was because he was gay. He was a great person. People are so afraid of something that is different — simply because it is different.”

Keeping lines of communication open and creating a safe place for children and teens involved in bullying to speak up is a major step toward fixing the problem, reports stopbullying.gov.

Don’t be afraid to speak out. You need to tell people what’s going on.”

“I want every kid to know it’s OK to be different. There is no mold. Not everyone is the same,” Capehart said. “People need to step back and see how their actions affect others. Take pride in who you are. It doesn’t matter what others say. The world is so much bigger than high school.”

Linden Community Schools Superintendent Ed Koledo said Thursday that out of privacy of Pacheco’s family he could not speak specifically about Josh’s death. He could say though that he has become aware that, “He got teased. I know that. I feel for him and I have a pit in my stomach from just thinking about it.”

As students make claims of other students bullying Josh, staff and administrators are attempting to substantiate those claims and to squash any hurtful rumors. “We haven’t substantiated any yet,” said Koledo.

Koledo said Josh had gone to the assistant principal some time ago for help and he believed that Josh had been helped from that contact. The superintendent said the district does have anti-bullying programs in place at each of the buildings and they have brought in groups and speakers to address the topic.

When asked if the school district had an anonymous tip line for students or parents to call if they are a victim of or a witness of bullying, Koledo said they did not. He added that Russ Ciesielski, the high school principal, however, is in the process of checking with other school districts that do have this type of system to see how effective it is for their students.

Koledo said if any student ever feels threatened or bullied, he or she is encouraged to reach out to whichever teacher, counselor or other adult they are most comfortable talking with in order to let someone know of their situation. He added that teachers are and will continue to remind students to speak up if they witness any such bullying behavior.

Click here to live to an audio of this story

We have a friend that daughter was being bullied at Linden High School She was a senior went to the principals office only told to deal with it. The bulling then got worse knowing the principal was going to do nothing. She is now a drop out. That is pathetic but of alot better that killing her self.

My daughter was bullied at the LHS building also.. My daughter came to me about it, I immediately contacted the school, and with rule book in my hand i had a meeting with the principal and vice principal. The "bully" got NOTHING but according to the rule book a life threat was an immediate expulsion. Nothing happened to this girl. She got a slap on the wrist, and my daughter still had to go to school and deal with the BS. The school does NOT care about their students. I'ts clear. They cannot tell me they do not know what is going on behind their doors. It happens DAILY and they do NOTHING!!!!

I have a child who is currently being cyber bullied at Linden High School. The school has been contacted 3 times and 4 police reports have been filed and unfortunately no one seems to be too concerned about it. I am not sure what the school handbook says about bullying but I am pretty sure telling my child they will keep their ears open is not the answer. Luckily my family and friends aren't taking it lightly and we are doing our part to put an end to this. There is a serious problem with bullying at LHS and the district needs to open their eyes and take it seriously.

I am so very sad and my heart goes out to the family of this young person. It never should have happened. Please...if you are being bullied at your high school, know there are so many other options than taking your own life. You are so very special and unique and you need to reach out farther than your local high school for help. There is a wonderful program through a local hospital where you can get help to face each day. Contact the NoBLE program, they will help you. You deserve to LIVE! NoBLE stands for No Bullying Live Empowered. Get empowered and start living your life, today!

It is unfortunate that the high school administration is not equipped to handle bullying, but with the knowledge that they can't deal with it, we must move on and let these young adults know where to go.

Josh's story is immensely disturbing. Almost as disturbing is the number of stories I am hearing about the culture in school that makes bullying an ordinary everyday activity. I would be grateful to the Tri-County TImes if you would use your public voice to hold the administration's feet to the fire, and not let the many questions surrounding Josh's death die with him. I am hearing many rumors from high school students in my church, of which I am confident not all are true. However, I also find it hard to believe that it is as hard to substantiate stories of some individuals who were behind this as officials would have us believe. This is especially true if there is, indeed, video evidence as was reported by several. My prayers are with Josh, his family, and friends - a number of people are going to have the worst of Christmases and I will be praying that God's presence with them will help in healing these deep wounds.

I think it's about time the school put a policy in place to stop the bullying. Someone should be held accountable for this tragic loss. What is it going to take to get the school to make an effort to protect our kids? We just assume when they're at school that they're safe, but it the school isn't doing their job, were horribly mistaken!

At what point do we start holding PARENTS responsible for their child's actions? Bullying may happen at school, but educators and school personnel are not the only ones accountable. Kids learn so much from home - be a role model to your child.