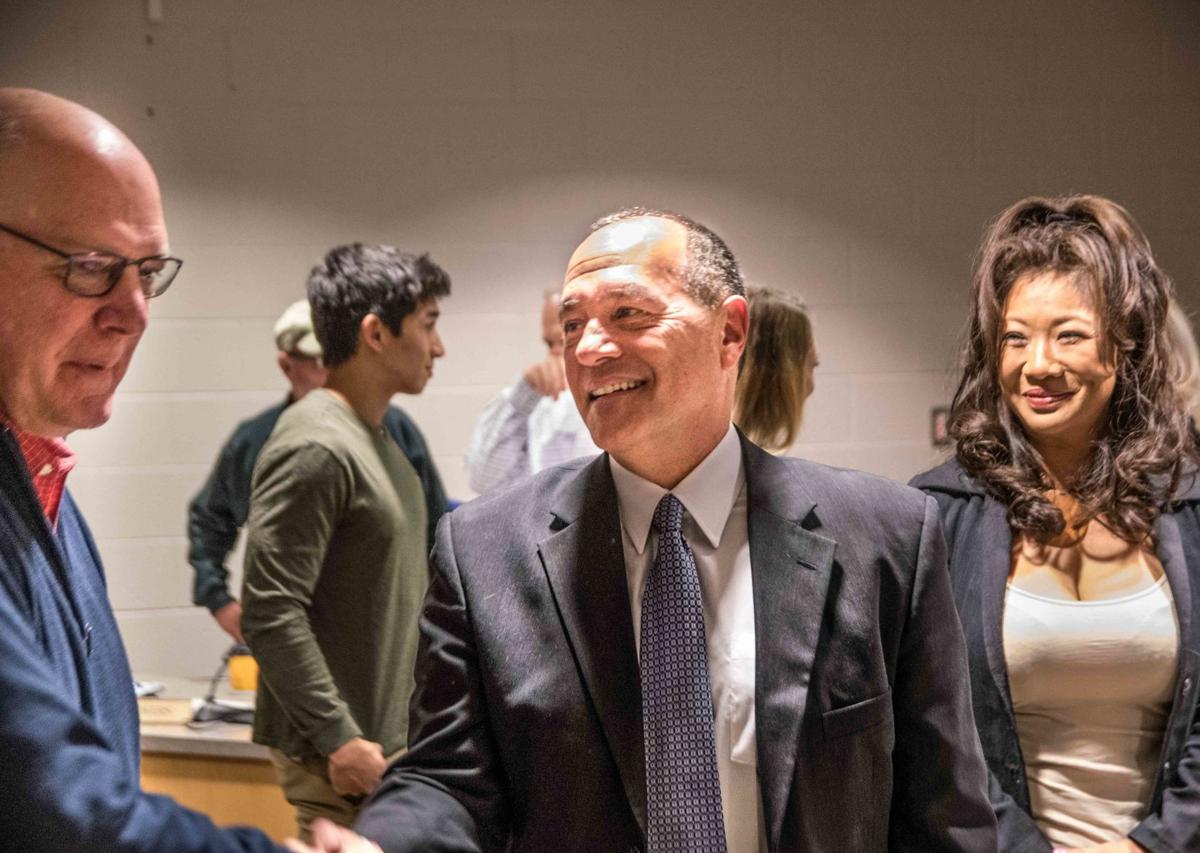 Jerry Narsh shakes hands with Holly Village President Tom McKenney (left) and various department heads after his contract as the next Holly police chief was confirmed by unanimous vote. Narsh is currently the Lake Orion Village police chief. He starts in Holly on Dec. 9. Members of his family, including his wife Amanda (right) attended. 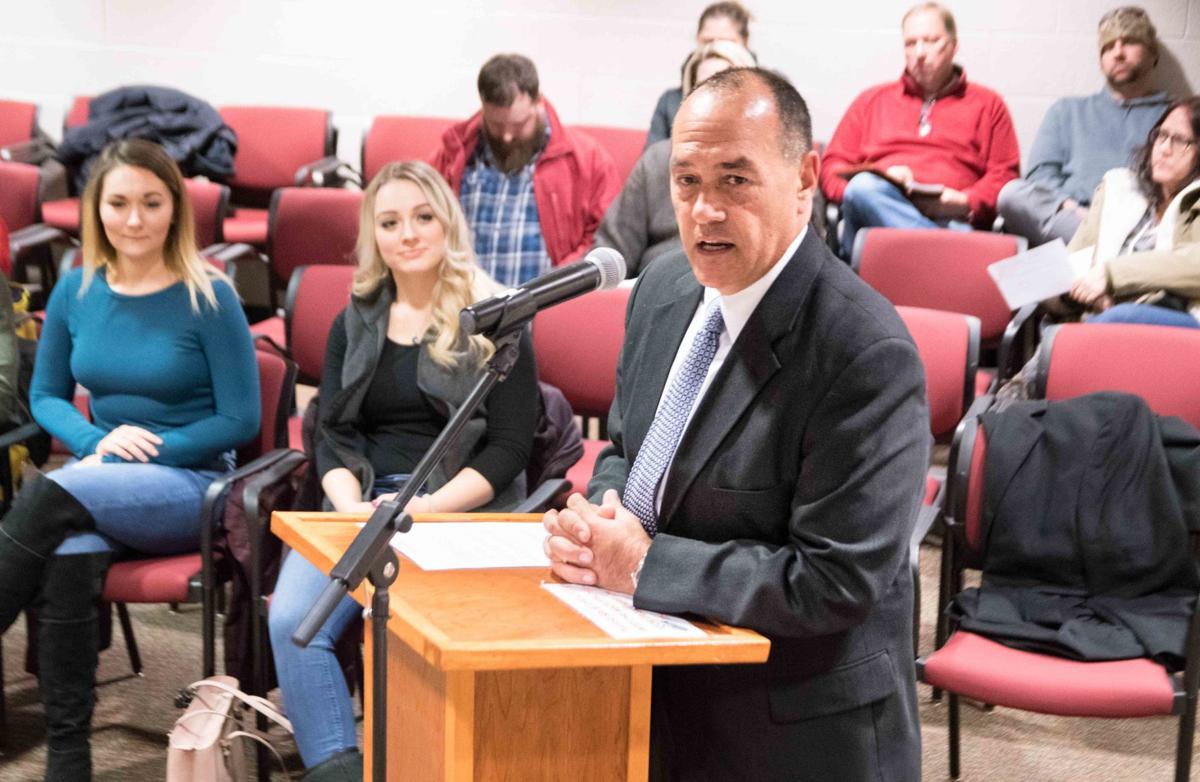 Jerry Narsh addresses the Holly Village Council, with his family behind him, on Tuesday, Nov. 12, prior to the council vote to affirm his contract as the next Holly police chief. 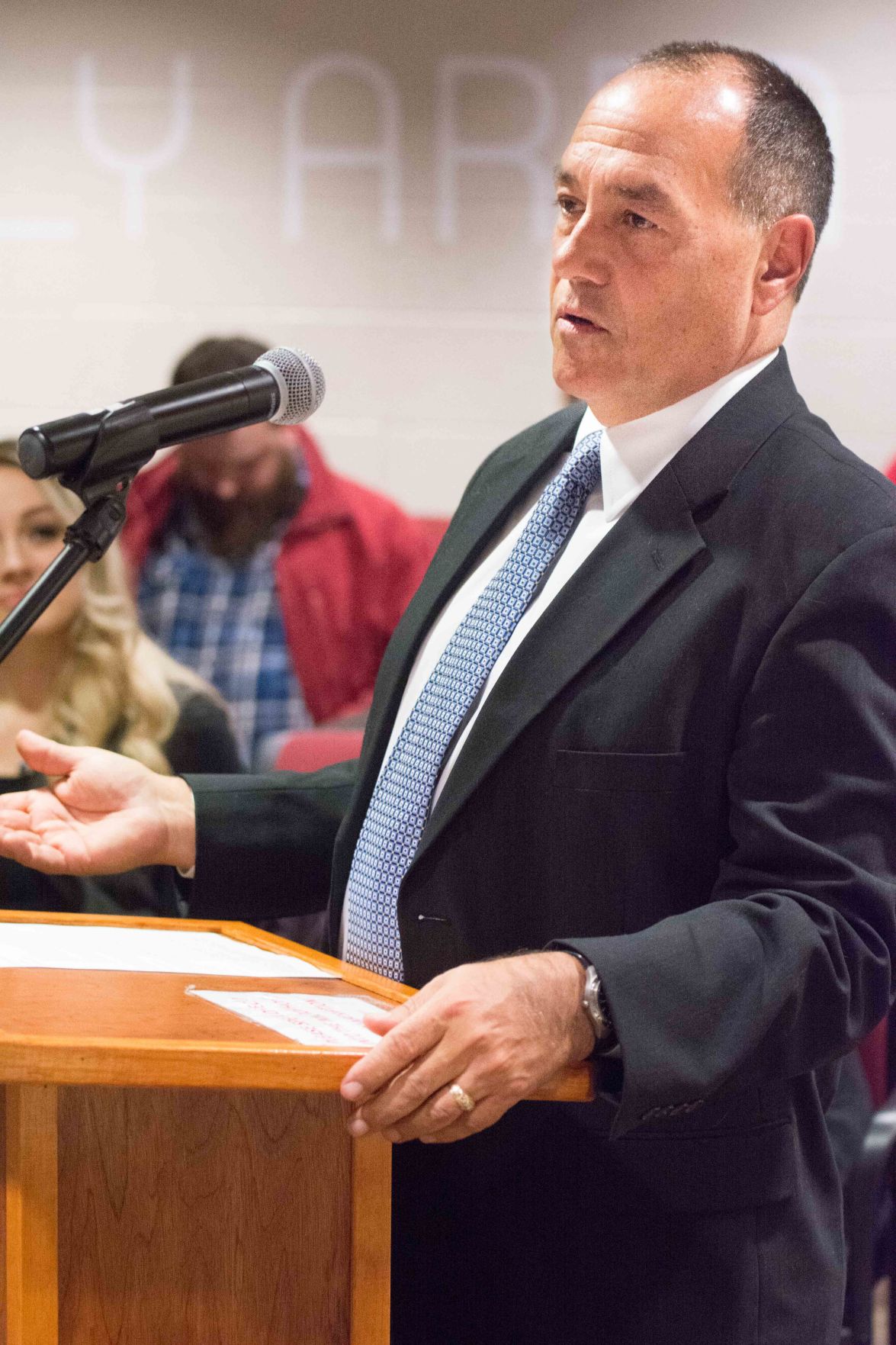 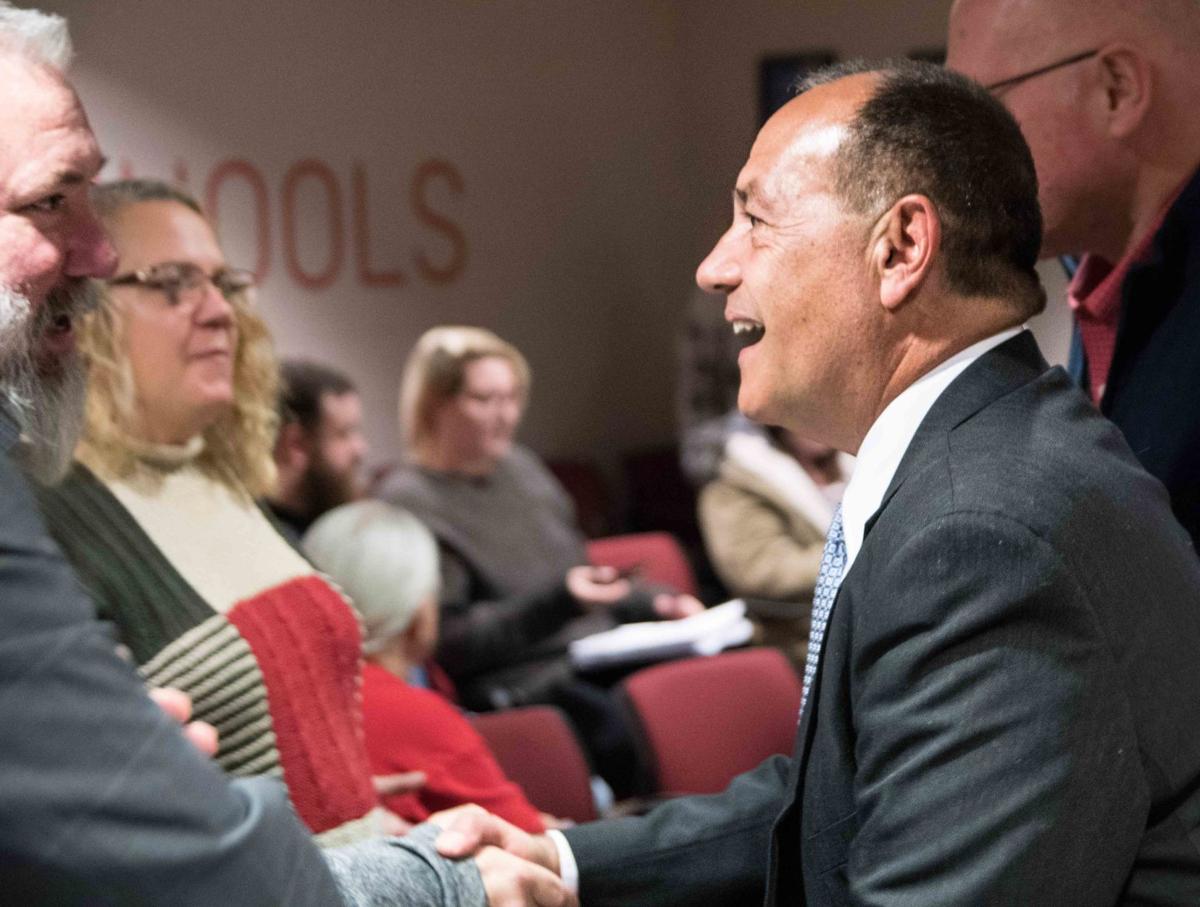 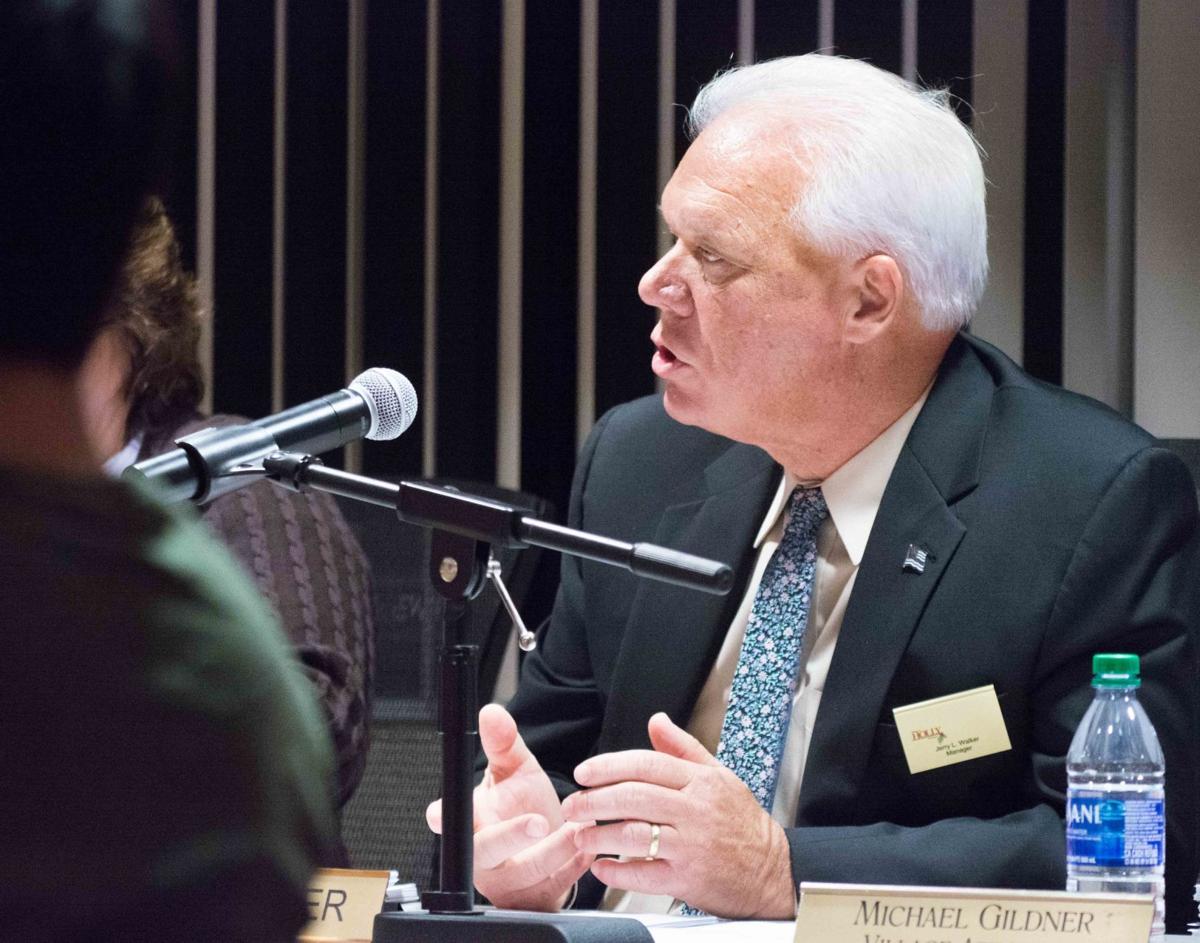 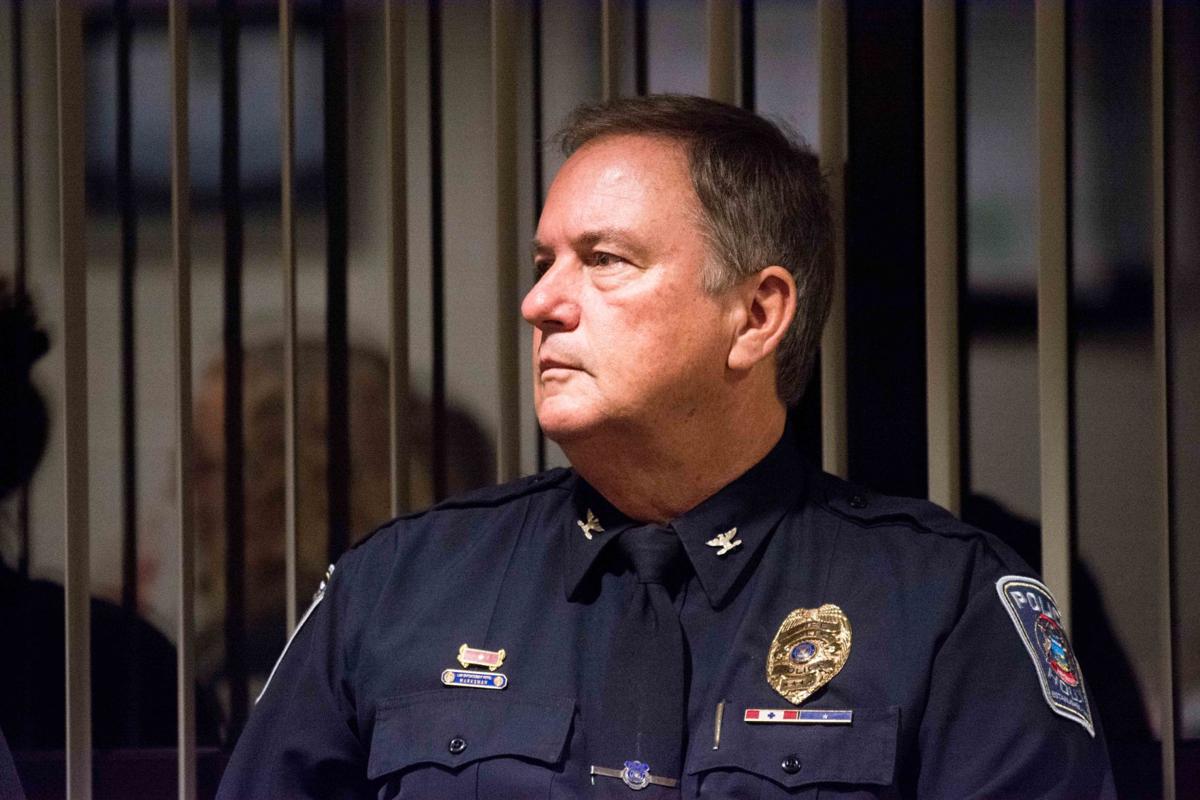 Jerry Narsh shakes hands with Holly Village President Tom McKenney (left) and various department heads after his contract as the next Holly police chief was confirmed by unanimous vote. Narsh is currently the Lake Orion Village police chief. He starts in Holly on Dec. 9. Members of his family, including his wife Amanda (right) attended.

Jerry Narsh addresses the Holly Village Council, with his family behind him, on Tuesday, Nov. 12, prior to the council vote to affirm his contract as the next Holly police chief.

Narsh has been a police officer for 38 years. He spent the last 19 as chief in Lake Orion. Interim Police Chief Scott Fischer’s last day will be Friday, Nov. 29.

According to the council action request by Village Manager Jerry Walker, Narsh will be paid $74,263 annually with additional benefits. Narsh said he’ll start on Monday, Dec. 9.

“He’s going to give us the police department we’ll all be happy with,” said Holly Township Supervisor George Kullis after presenting Narsh to council. Kullis was one of five on the selection panel.

Narsh was able to address the council before the official vote to accept Walker’s recommendation to hire Narsh.

Narsh said the police department is all about creating trust. “We go forth every day to improve people’s lives and build that trust,” he said.

He describes his style as “open door, open heart, open communication,” and he looks forward to bringing that style to Holly, which includes being involved in various community groups and coalitions.

Narsh will probably have a different style than past police chiefs. He uses social media regularly. His department posts “police blotters,” and photos and information on suspects. It’s a practice he intends to bring to Holly.

He’s comfortable putting himself out there for the sake of a cause. This fall he wore a full pink uniform for the “real men wear pink” breast cancer campaign in Lake Orion. He even dressed as Ike Turner for Halloween.

Members of the police chief search panel were chosen by Walker. They included Kullis, resident Gary Mills, Village President Tom McKenney and Holly Fire Chief Steve McGee. While there were no police officers on the committee, Walker said the police department and fire department work together the most.

Walker himself had a career in law enforcement. He worked with Narsh in Lake Orion briefly as a night shift patrol officer in 2010 and 2011. “While working at Lake Orion I was able to observe his leadership style, character and relations with the public,” Walker said. “In part, the observations I had gave me confidence in my recommendation to council to appoint him as the next leader for the Holly police.”

Walker said he believed this past experience with Narsh wasn’t worth noting publicly during the process.

Walker said that he had nothing to do with the candidates until the final two were selected, which included Narsh. “During each step of the process Jerry Narsh was ranked as number one by the selection panel during phases one and two along with Chief Fischer and me during phase three (final interview),” said Walker in an email. “The process was fair and the Selection Panel did a good job in narrowing the field to the top two candidates to be interviewed.”

The final interviews were held Oct.29.

Fischer was appointed interim police chief soon after Michael Story resigned in late August. Fischer was retired from the Holly Police Department as a detective lieutenant after 33 years of service. He was not seeking the permanent position.

Narsh’s official swearing-in ceremony will be Thursday, Nov. 21 at the Holly Vault at 202 S. Saginaw St.  There will be a meet and greet with Narsh at 5 p.m., a swearing in at 6 p.m. and reception to follow.

Swearing-in ceremonies are normally held during a village council meeting, but the event was suggested by Kullis as Holly Chamber of Commerce president to promote the chamber and draw in the community.

“I look forward to bringing that community policing style … my door is always open.”