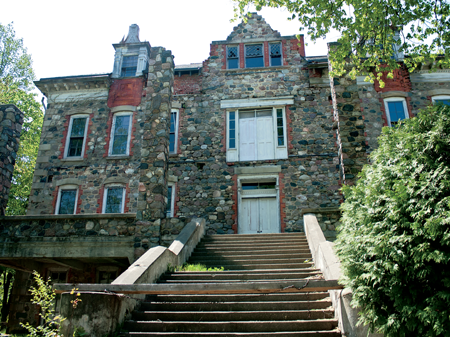 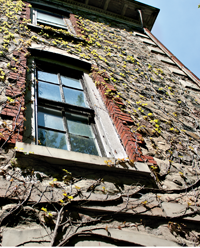 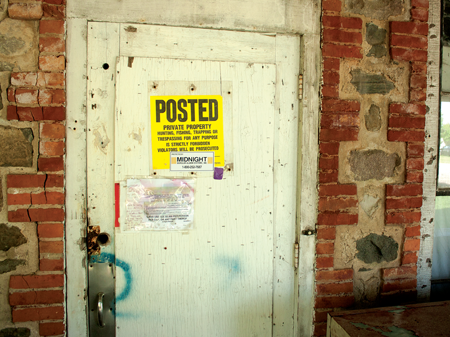 "I didn’t believe in any ghosts or spirits but I sure do now. I was scared to death of the place."

"I didn’t believe in any ghosts or spirits but I sure do now. I was scared to death of the place."

Fenton — Penny Crane is convinced that the monastery on High Street is haunted. The 10,000-square-foot, three-story hulk of a building looks like the ideal location for a horror movie. Every window and doorway is closed off from the outside world, leaving its interior shrouded in mystery. The stone stairs leading to the entrance are chained off from the public. A tattered condemned sign issued by the city hangs from a ground level door, as well as a no trespassing sign on one of the windows.

Playing off the building’s haunting atmosphere, Crane opened up the former seminary to the public as a haunted house shortly after she bought it in 1995.

“I didn’t believe in any ghosts or spirits but I sure do now,” said Crane. “I was scared to death of the place.”

But shortly after discovering the 145-year-old building was opened up to the public, Crane said city officials closed its doors, condemning it until the proper permits were approved for renovation. Crane has been fighting with the city ever since to lift the condemned status and transform the monastery into a usable facility.

“The mayor and the council in the last 20 years have done nothing but stand in the way and stall,” said Crane, who gives piano lessons in a house behind the monastery. “I’ve fought unbelievable circumstances. Anyone who has tried to buy this… they don’t work with anyone.”

Fenton City Zoning and Building Administrator Brad Hissong said Crane needs to get reports from an architect and engineer in order to get the condemned status lifted.

“You can’t fix the dry wall, paint it and move on in,” said Hissong. “There are lots of unanswered questions before we can get it fixed.”

Hissong also added that the city cannot allocate funds to restoring the building since it is privately owned.

Crane said she’s turned in several structural engineering and architectural reports to city officials and even went as far as obtaining a degree in architecture in order to work on the building. Over the years, Crane has attended numerous city council meetings and met with various city officials. The status of the monastery hasn’t changed however and the building remains closed to everyone, even Crane.

The monastery was built in 1868 and was originally a Baptist seminary. By 1886 it became a retired home for Baptist priests and their wives. The stone goliath saw more transformations in the next century, retrofitted into apartments between 1935 and 1945. The monastery served a short stint as a learning center for kids in the late ‘40s. The elderly filled the halls by the 1950s when the building became a nursing home.

Since its heyday as a nursing home, Crane said various people bought up the monastery in hopes of making a profit off it, only to go broke less than six months later. Crane has done everything from hosting fundraisers to applying for grants and reaching out to historical societies.

After many years of being unable to move forward with the house, Crane tried to walk away from it this past winter. But in a strange turn of events, Crane still wound up as the owner of the monastery. Genesee County Treasurer Deb Cherry said since not all of the previous owners were properly notified, Crane legally gets to remain the owner for at least another year.

Crane still wants to see the monastery open up to the public once again. With connections to the Underground Railroad and continual interest from ghost hunters and historians, Crane sees unlimited potential for the building.

Hissong said he would love to work with Crane or anyone else who wanted to restore the monastery so long as the proper permits and reports were in order.

Fenton City Manager Lynn Markland said he’s unsure of how city officials would proceed if they ever came to own the former seminary.

“We don’t really have a position on it at this time,” Markland said. “It’s kind of hard to make a comment. We’d have to look at what’s available to work with and if there are some grants to help restore it.”

Click here to listen to an audio of this story

There are only two unique buildings left in Fenton and both are on the council's tear down list. The other one is the big white train freight building downtown. It used to have a mural of centennial Fenton on it's side. And Fenton DDA is working on bringing us pigeon perch sculpture.

The Baptist Minister's Home and the Grain Elevator are both handsome nineteenth century Fenton buildings in desperate need of restoration. There are many instances of buildings of this era being successfully restored and placed into adaptive re-use, funded by government grants.

My experience, however, tells me that the realistic vehicle for such restorations is through private ownership and private funding. The bottom line is this - the Fenton City Council can deliberate the fate of these two buildings as long as they wish, but practically speaking, until someone comes forward with a reasonable plan, backed by solid financing, both buildings will continue to languish - until Council then has no choice but to debate demolition options. Look to the east and to Holly's Gray Lady for their (almost) inevitable future.

As a young guy, I'd sure love to volunteer labor to get the monastery back up in shape. ive helped out with the friends of highland rec a little bit in the past cleaning up Edsal Fords vacation home in white lakes highland recreation area.

it really is a disappointment to see the lack of motivation and vision of importance from the city lately for historical landmarks in the city. Yes i understand the building is outside of town & under private ownership but realistically there really isnt much of anything left in fenton... look "downtown" fenton, or rather lack of.

a few years ago i talked with a senior resident of fenton on the sidewalk just north of the post office and he told me the highlights of the town back in the day as he was growing up and sadly how everything lately looks generic and plain & going down the drain.