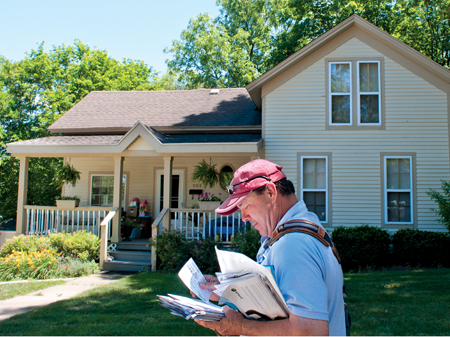 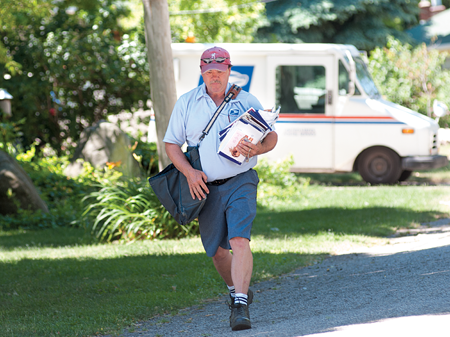 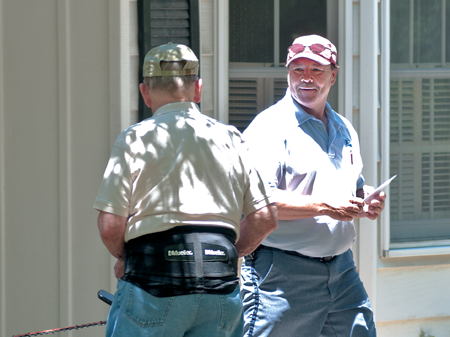 Fenton — On Monday, the sound of chicks chirping emanated from a shipping container. The chicks aren’t pets; they are ready for a local pick up. Nearby, employees worked on deliveries under the yellow lights of the processing area of the Fenton post office. Outside, a line almost reaches outside of the lobby as the noon rush comes to an end, and manager Michael Steiner II empties a street side mail drop box with a canvas cart.

Steiner said that the Fenton United States Postal Service (USPS) office will handle 15,000 deliveries in the Fenton area, which includes Fenton and Tyrone townships. They will also handle 1,200 small to large parcels.

Total delivery volumes for the USPS have declined over the past years, down to 168 billion in 2011, from 203 billion in 2002, yet the postal service works to adapt with online services, commemorative merchandise, and competitive parcel services.

Letter carrier Jim Hajec delivers a lot of ads on Monday. “People throw them away,” he said. Hajec would prefer to deliver more first-class letters, but that area has slowed significantly in recent years. First class mail volume has decreased by half since 2002, at 25 billion letters delivered in 2011. He said there are some people that look forward to ads on Monday.

He walks 10 miles each day, maybe more if it is required. “No one believes I’m going to be 59,” said Hajec, who looks closer to 40, apparently kept healthy with his active job. Hajec has been working for the USPS for 41 years — he has the most seniority at the Fenton post office, and said he’d retire when he finally looks 55.

He appreciates the shade of a street, especially on a hot day like Monday. “When it’s hot you just sweat,” he said. He likes the winter; it’s easier to regulate body temperature. He took a chug from a large jug of water from his “jeep” before he headed back out.

A carrier like him will make between 400 and 1,100 deliveries in a day. On Monday, he did a combination of driving and walking around the neighborhoods on South East Street in the south of Fenton.

All the carriers get in to the processing area at 8 a.m., and spend two hours sorting their parcels, which are not presorted, and then sorting “flats” which are packages like magazines, and any first-class mail that is not presorted. A bulk truck drops everything off at 4 a.m.

The Fenton post office has 49 employees, including 39 letter carriers, eight clerical workers and one custodian. “We’re just happy to be delivering what we can daily,” said Steiner. Neither him, nor Hajec mind the ads they deliver. “We’re constantly evolving,” said Steiner. The USPS acts as a business, doing the services that bring in revenue.

He said parcel deliveries have picked up 50 percent in the last few years, as the USPS changed its rates to be more competitive. He has an optimistic view for the USPS in the future.

Steiner is proud of the customer service his group provides — he acknowledges that they have competition in other delivery services, and customer service is important. “If they didn’t like us they could go elsewhere,” he said. The daily deliveries keep them all busy, as a steady stream of customers assailed the front counter, dropping off packages to mail, buying stamps, or buying a money order.

On the road, or on foot, the carriers can’t help but to form relationships with the people — and the dogs that they meet. Hajec tossed a treat at a black dog barking from a deck. “That dogs sits there for me all day,” he said, adding that he had only been bitten twice in his career.

His favorite part of the job is the people he meets. It’s not unusual to stop and chat with a resident for 15 minutes during his route.

Steiner sees the USPS having a good future, as parcels and even pre-sorted mail needs to be delivered by someone. He said the workers at the Fenton post office are dedicated to what they do. “Workers in Fenton are very dedicated and like being a part of the community,” he said. “This post office is very community oriented.”

Hajec said the same of the community he serves — “I have all great customers,” he said.

The Postal Service is the only organization in the country that has the manpower, network infrastructure and logistical capability to deliver to every residence and business in the U.S. and its territories.

If any employee in this area was observed chatting for 15 minutes management would re-evaluate their route and add about 45 more minutes to keep him busy. Also, after 40 years an employee's pension is topped out so they earn no more benefit by remaining other than keeping some unemployed younger person from having a better job and benefits to care for their families. I mean hey, we don't want this guy to retire and go home on $30,000 plus a year with health insurance and risk being bored...

And you're assuming he only does this once a day!