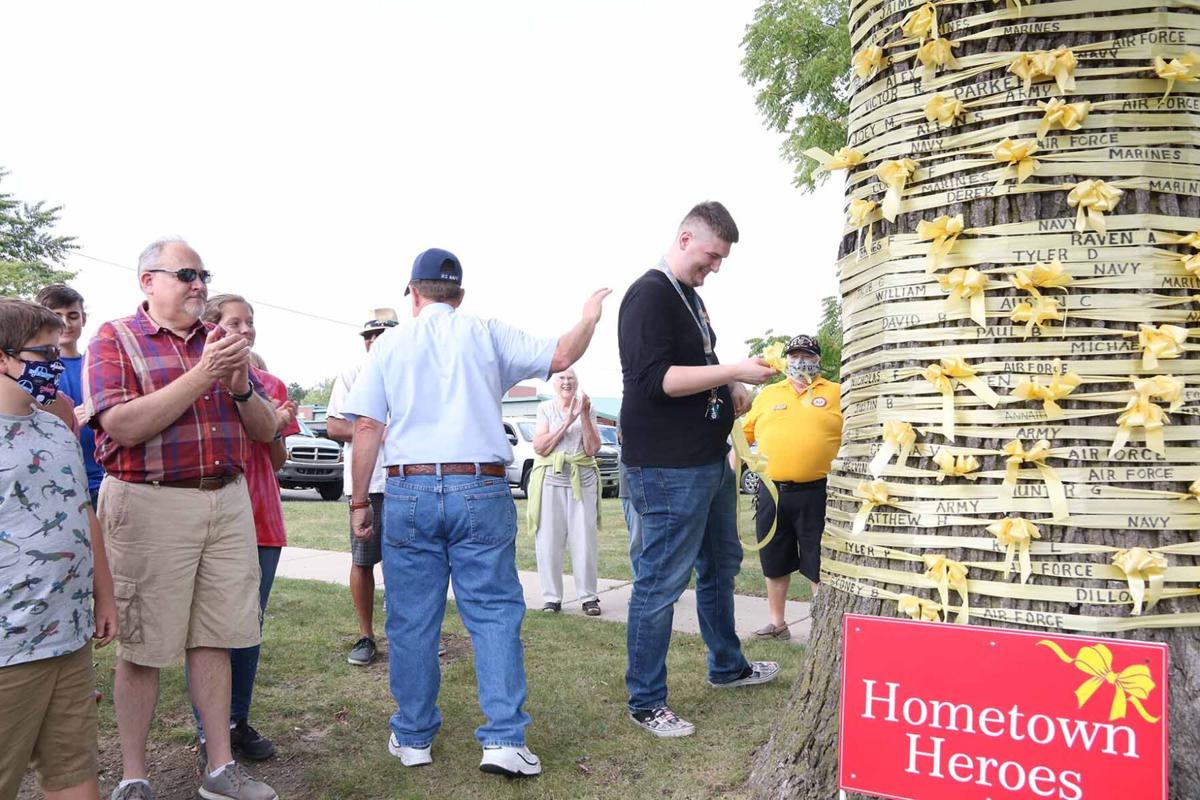 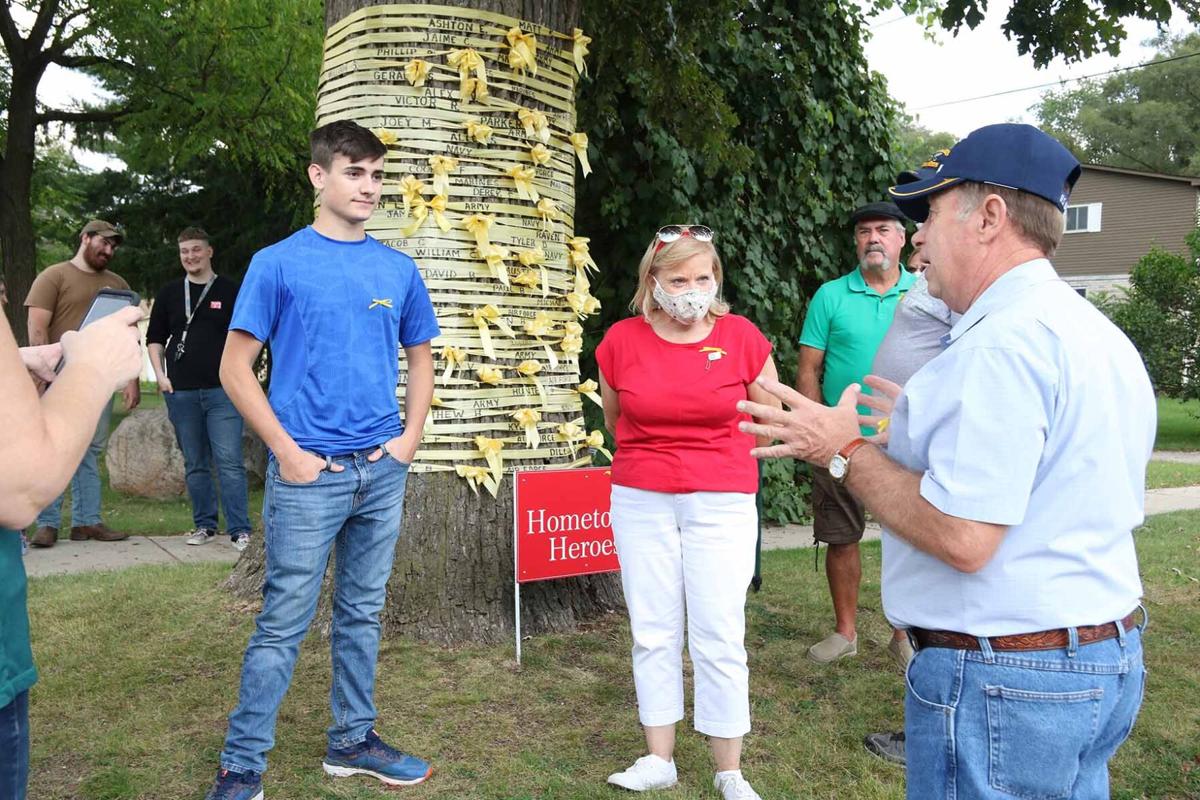 Vaughn Liegl, 18, receives congratulations from Ina and James Golden after they put his ribbon on the tree. He left for basic training Tuesday, Sept. 8. 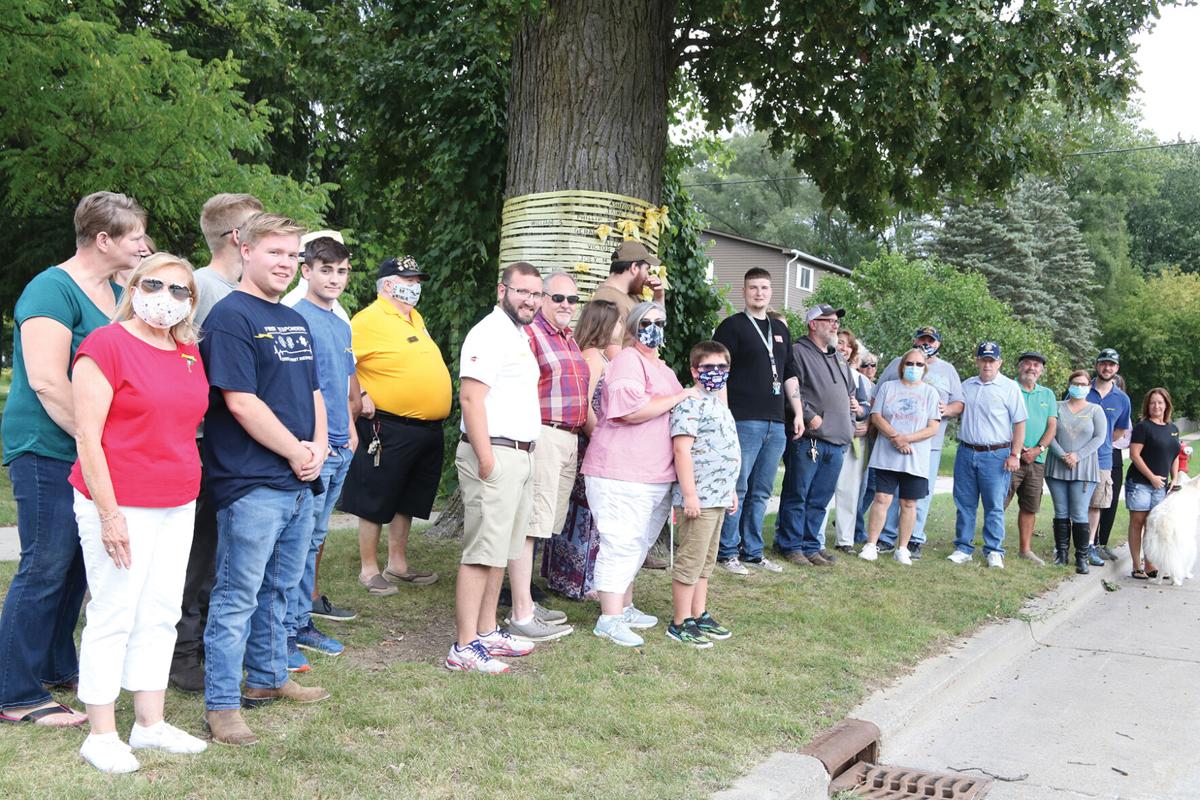 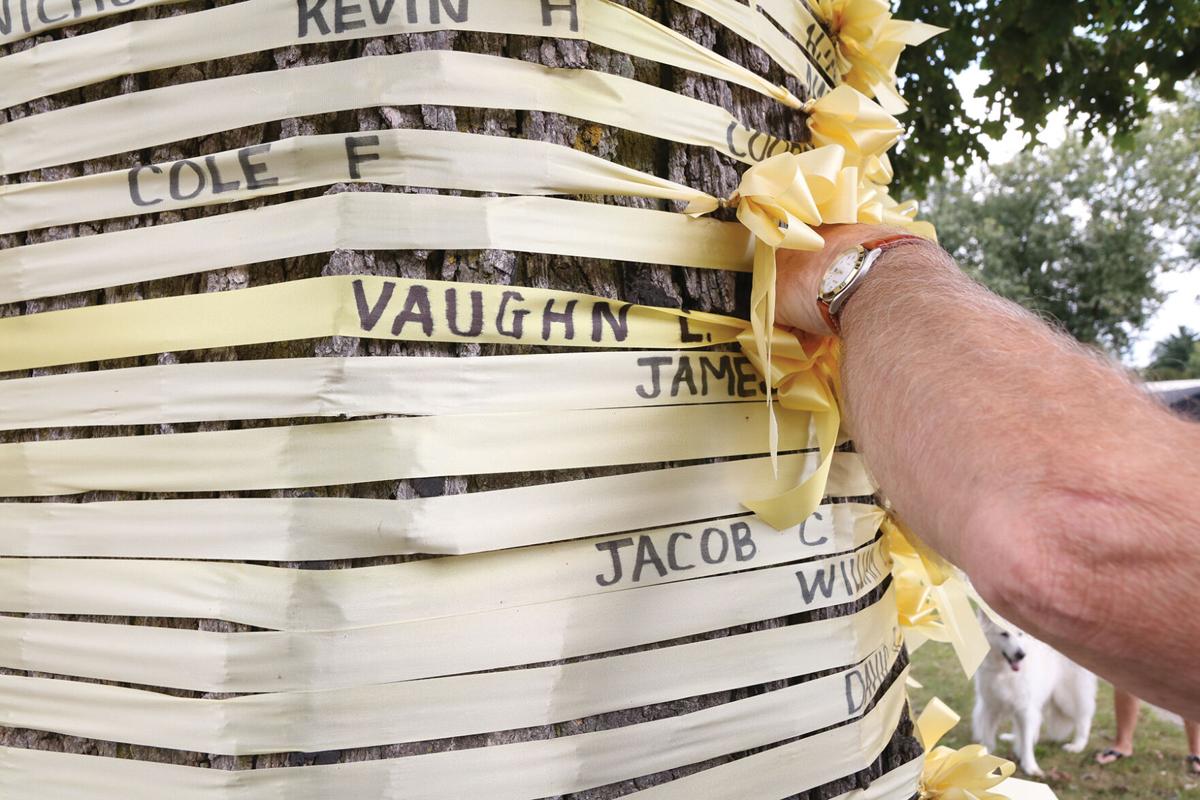 The tree is home to 40 ribbons currently, all with a name and branch of service of someone actively serving. 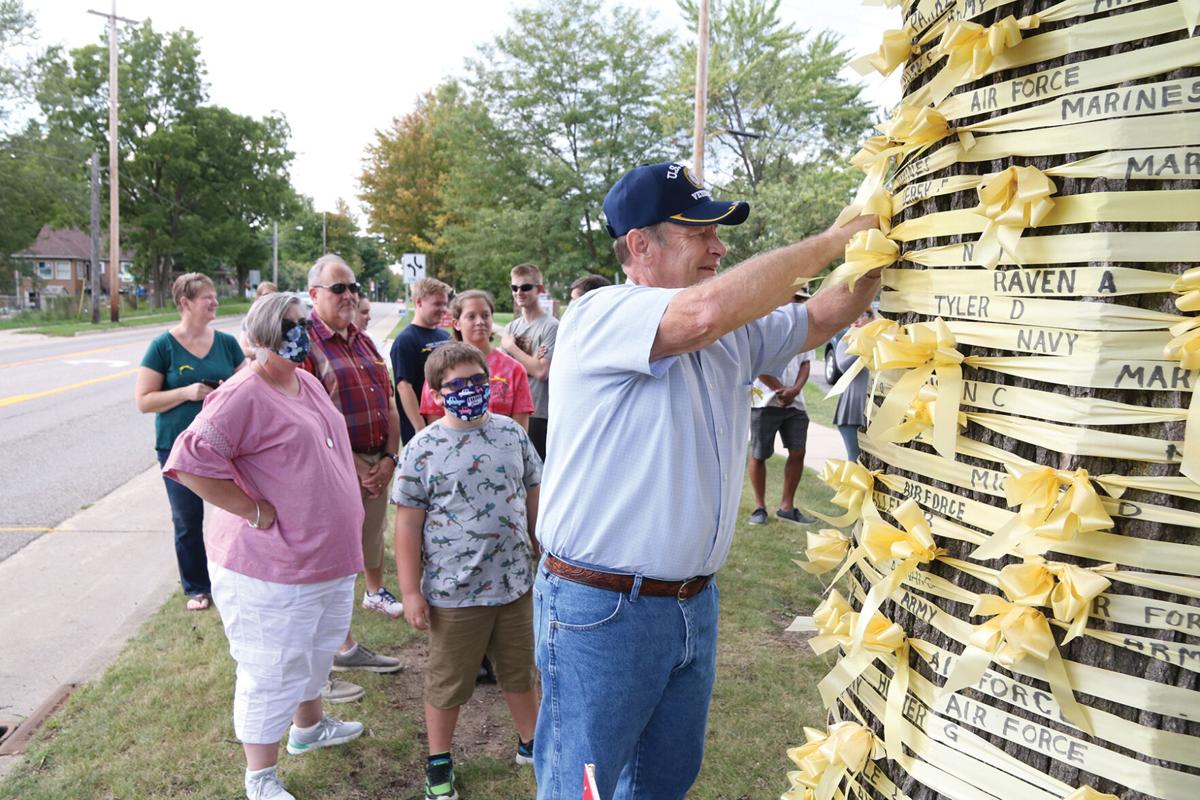 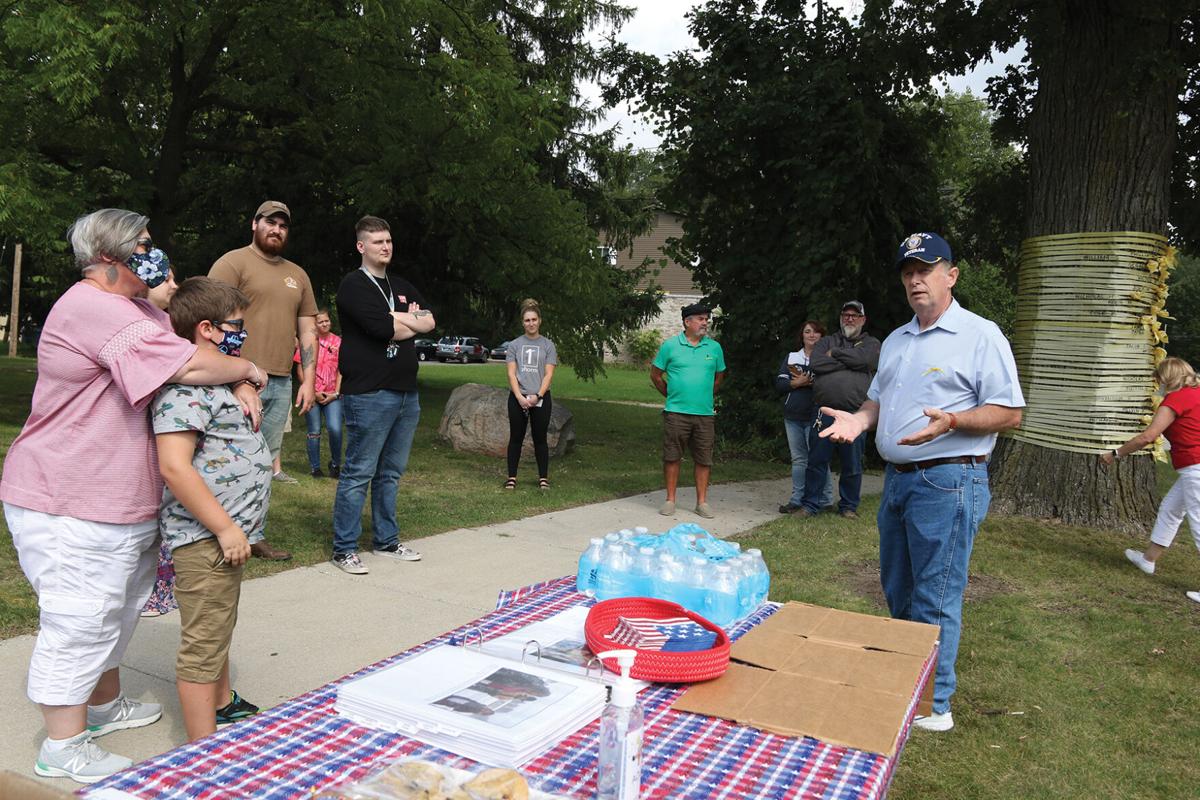 Vaughn Liegl, 18, receives congratulations from Ina and James Golden after they put his ribbon on the tree. He left for basic training Tuesday, Sept. 8.

The tree is home to 40 ribbons currently, all with a name and branch of service of someone actively serving.

Holly — On Saturday, Sept. 5, the Hometown Support for All on Active Duty organization welcomed one military member back from service and cheered for one who left for basic training on Tuesday.

This program organizes memorable sendoffs for Holly area residents leaving for active duty. They write the names of these people on a yellow ribbon and tie it around a tree in front of the Holly Elementary School. They started doing this September 2019.

The large tree now has approximately 40 yellow ribbons around it. Organizers of the group, James and Ina Golden, who are both veterans, invited James Welch, 23, to remove his ribbon Saturday. Right after, Holly graduate Vaughn Liegl, 18, put his ribbon on the tree.

Welch returned from the Navy about a month ago.

A crowd of two dozen people cheered at the event.

“I love (being home). I miss it. I’d rather be here than at sea. It’s far away from family, being away from home, not knowing where you’re going to end up,” he said.

Welch, who graduated from Holly High School in 2015, was gone for five years and one month while he handled aircrafts on carriers at sea. His rank is ABHAN, which stands for Aviation Boatswain’s Mate Aircraft Handler Airman.

Welch left for the service right after high school and returned in August. He’s been looking for work and hanging with his friends and family while he’s been back.

Welch was able to come back about three times in that five years, and he would stay for around two weeks to a month. He was stationed in Japan for three years before being sent to San Diego.

“I wasn’t here when they did this,” he said, referring to the ribbon on the tree with his name on it. “I had seen pictures and I was like, ‘oh, I didn’t even know my name was on a ribbon.’ I found out when I was in the middle of deployment. As family came and took photos of it, I was more proud of it. My town put my name on a tree saying that I served in the military. I was proud of it.”

Welch said he was “very excited” to take the ribbon off.

Vaughn Leigl, 18, a graduate of Holly High School, left for basic training Tuesday, Sept. 8, which he’ll do at Fort Jackson in South Carolina.

“I’m ready to go,” he said on Saturday after his ribbon was put on the tree.

Leigl has known he’s wanted to join the Army since he was 4 years old. His father also served in the Army, which was one of his biggest inspirations for enlisting. After 10 weeks of basic training, he’ll go to San Antonio, Texas, for training in cybersecurity.

“I love computers. I rip apart and build my computer almost every week. It’s fun,” he said.

The Goldens, from the Holly Area Veterans Resource Center, started this program for active duty military members because they wanted to show that the community supports them. The organization sends care packages to active duty members, and helps veterans by contacting Helmets to Hardhats, an organization that helps active duty and transitioning service members find work.