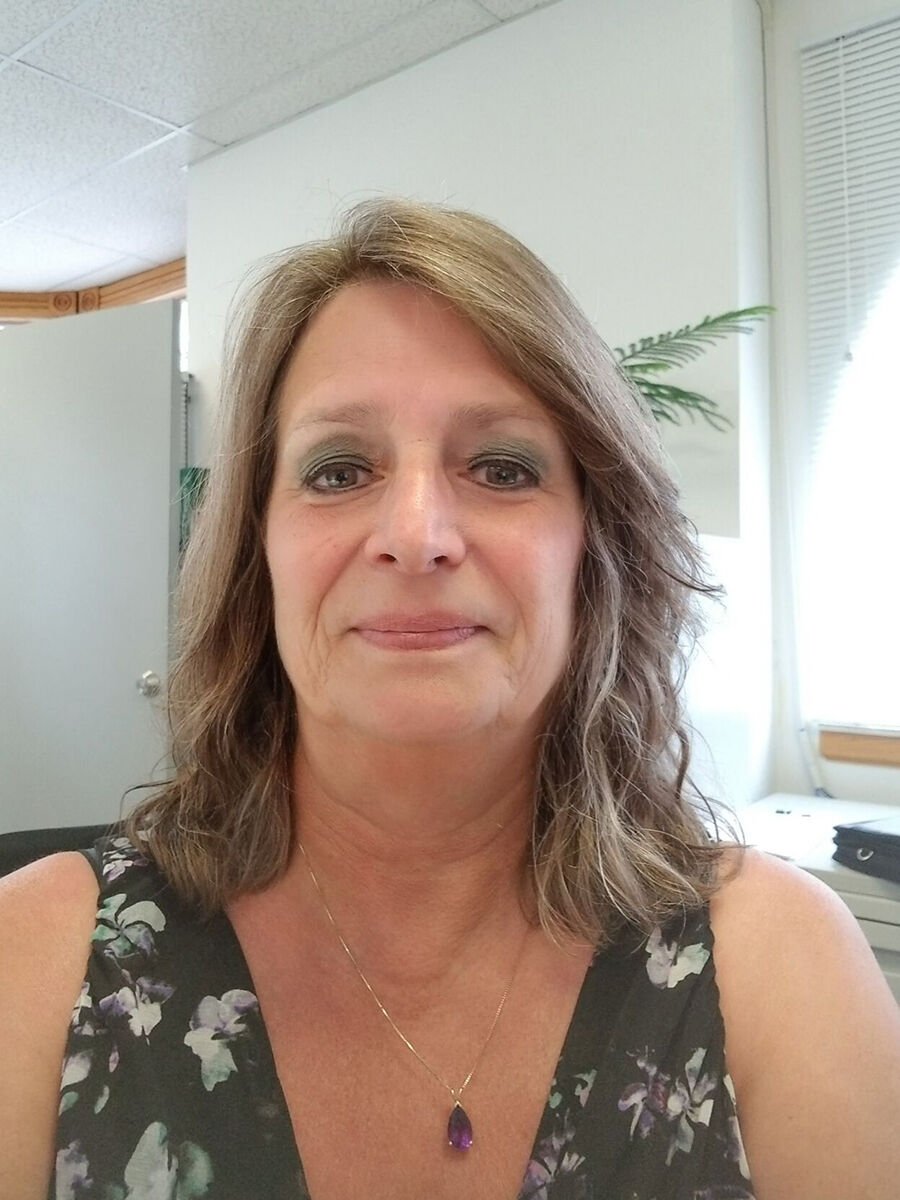 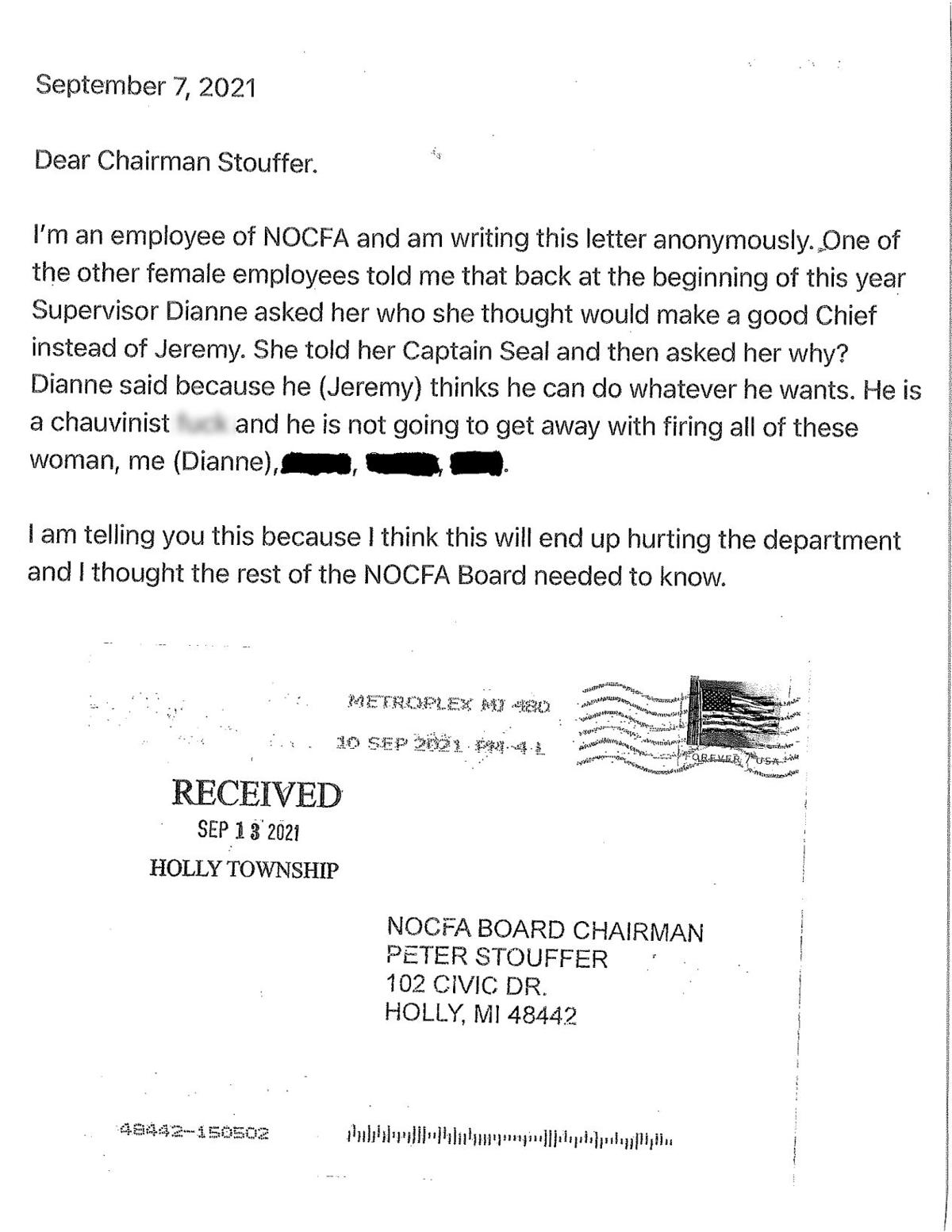 This copy of an anonymous letter and envelope that was sent to the Holly Township offices was obtained through a Freedom of Information Act request.  The opening and distributing of this letter by the NOCFA secretary to the NOCFA Board prompted the NOCFA chair to call for the censuring of the secretary.

This copy of an anonymous letter and envelope that was sent to the Holly Township offices was obtained through a Freedom of Information Act request.  The opening and distributing of this letter by the NOCFA secretary to the NOCFA Board prompted the NOCFA chair to call for the censuring of the secretary.

In an occasionally combative meeting, the Oakland County Fire Authority (NOCFA) Board voted 3-1 during a special meeting Monday, Sept. 27 to censure Holly Township Clerk Karin Winchester who serves as secretary on the NOCFA Board.

According to the Merriam-Webster dictionary, censure means to formally reprimand someone.

The reason for censuring Winchester, according to Stouffer, is because she opened a piece of mail addressed to him that she received at the Holly Township office. Inside the envelope was an anonymous letter, the contents of which were not disclosed at the meeting. The Times later received a copy of the letter through the Freedom of Information Act. See the attached photos.

Stouffer told the Board that he filed a complaint with the U.S. Postal Service and has a case number for the investigation. He accused Winchester of embezzling and distributing a letter meant for him. Citing Robert’s Rules of Order, he said Winchester, who he was motioning to censure, would not be able to partake in the vote, but could partake in the discussion.

Winchester said during the meeting that she accidentally opened the envelope. She said the letter stated it should be given to the NOCFA Board and that no personal mail of Stouffer’s arrives at the Holly Township office.

“I am the NOCFA secretary. I accidentally opened it because I get a pile of mail. I turn it over and I rip up the, you know rip them down. I didn’t even know it was addressed to Peter until I showed it to George (Kullis). Clearly, this letter was to be given to the NOCFA Board. It was addressed to Holly Township. There’s no personal mail sent to Mr. Stouffer. This is a public unit of government and Holly Township is a public unit and so is Rose Township so it is public information. I just disseminated it. It’s coming to me. I opened it. It was nothing intentional. And for you to sweep this under the rug by this tyrannical behavior is unacceptable.

Stouffer said his name was clearly on the envelope and that it was a federal offense to open. He said if it’s opened in error, what is done afterward is telling. “She decided to distribute,” he said.

Gambka said if the letter was addressed to Stouffer, it should have been given to Stouffer.

Winchester said the contents of the letter should be investigated.

Kullis said he believed a motion to censure should be done after the USPS investigation is complete.

Winchester said the letter belonged to the Board, not to the chairman. “The NOCFA Board needed to know,” she said.

Kullis again said with the issue of censuring, the Board should wait for the USPS investigation. “There could be nothing here,” he said.

Winchester said the main issue is the content of the letter. “It’s a public document. What do we do with it? Trust me, it was accidental. It belonged with the Board. I’m not a thief.”

Kullis said the motion for censorship alleges that something illegal occurred before an investigation could make a determination. “We need their information before censure.”

Kullis’ motion to postpone a vote on censuring Winchester failed by a vote of 3-2 with Kullis and Winchester voting to postpone action. Stouffer said as chairman of the Board it was his decision to not use Winchester’s vote citing the Robert’s Rules of Order, thus making it 3-1 for not postponing a motion to censure.

Following the 3-1 vote to censure her, Winchester said, “Unbelievable.”