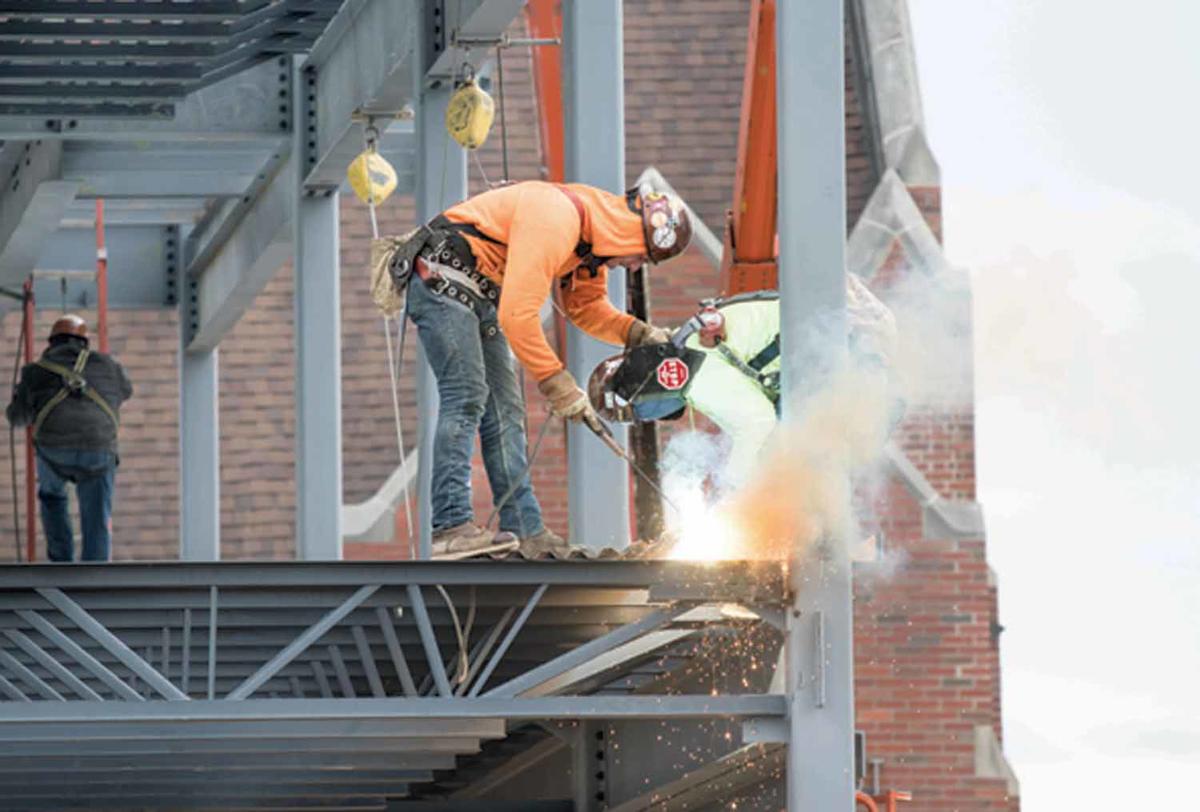 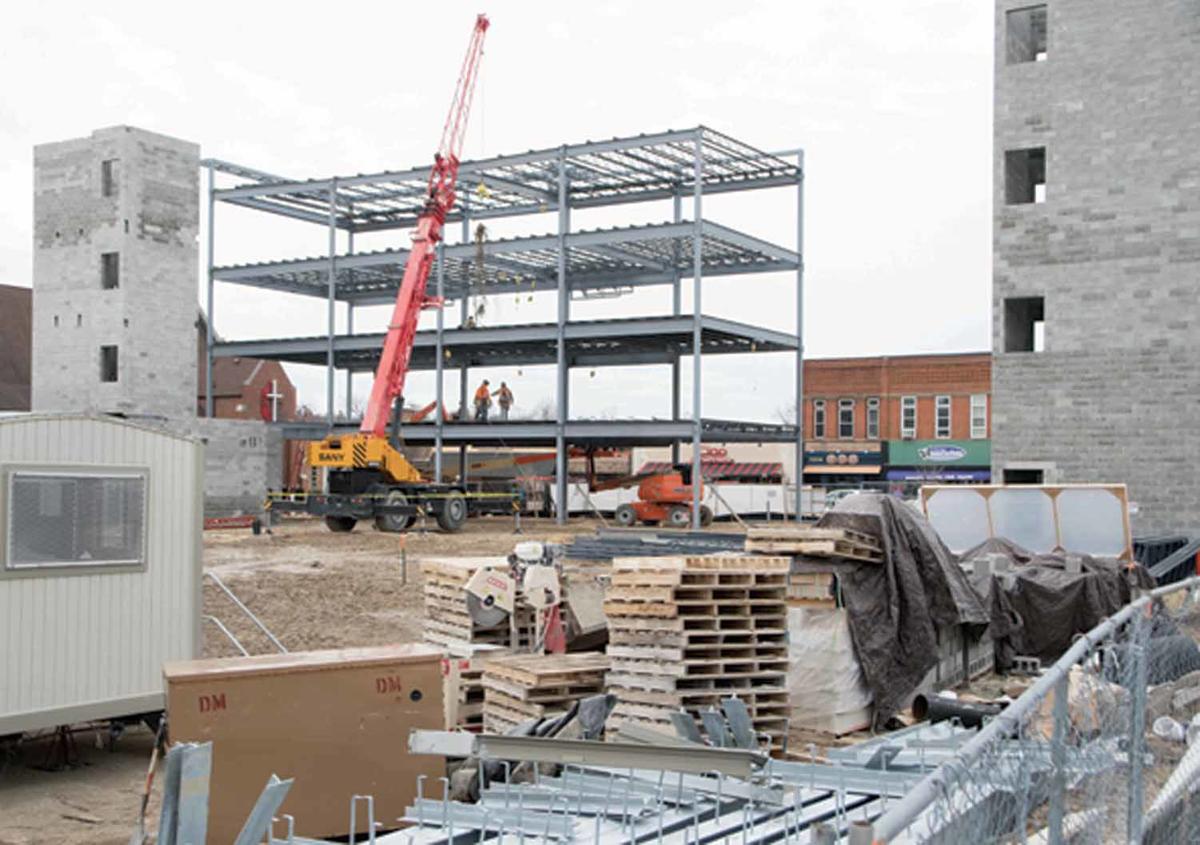 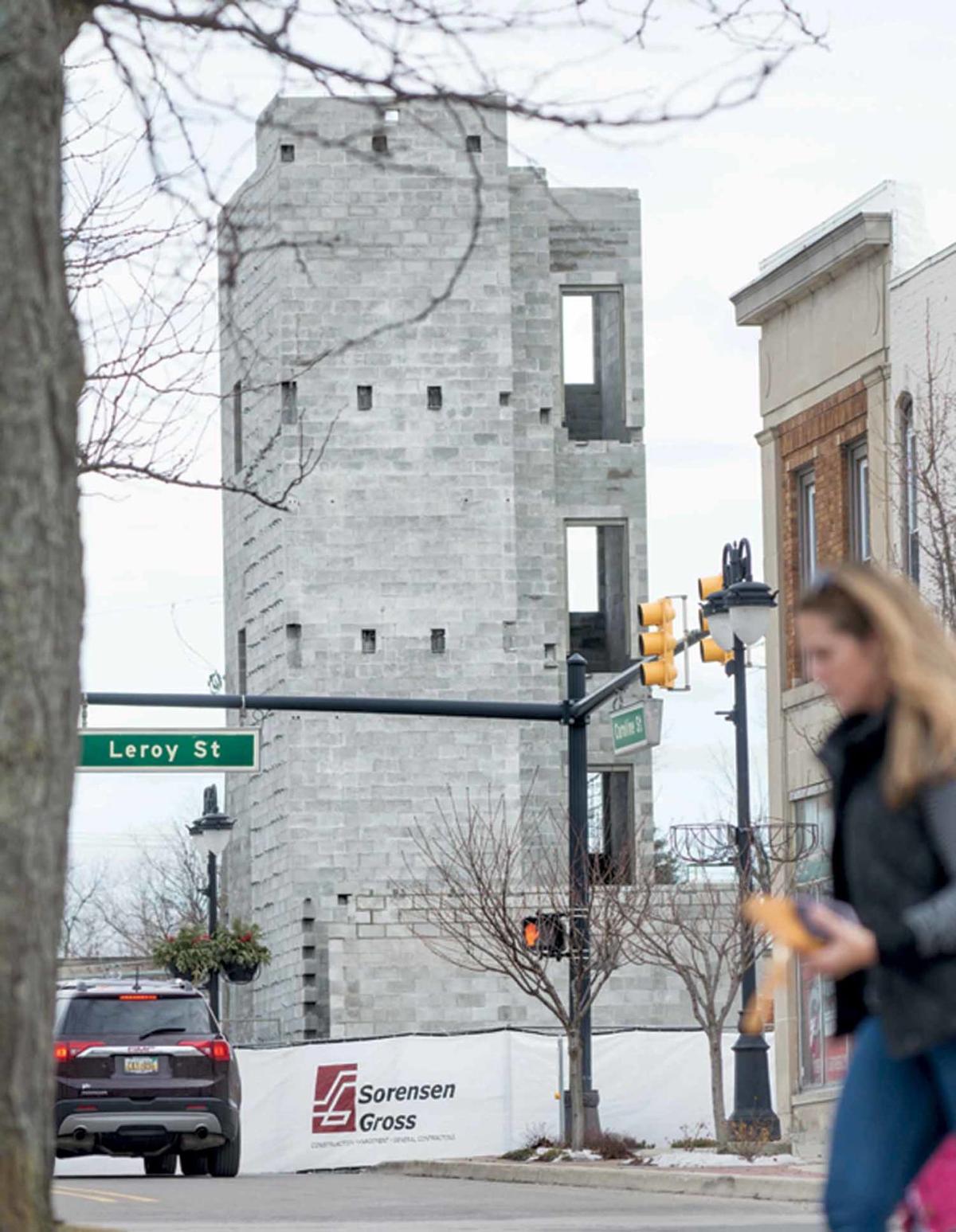 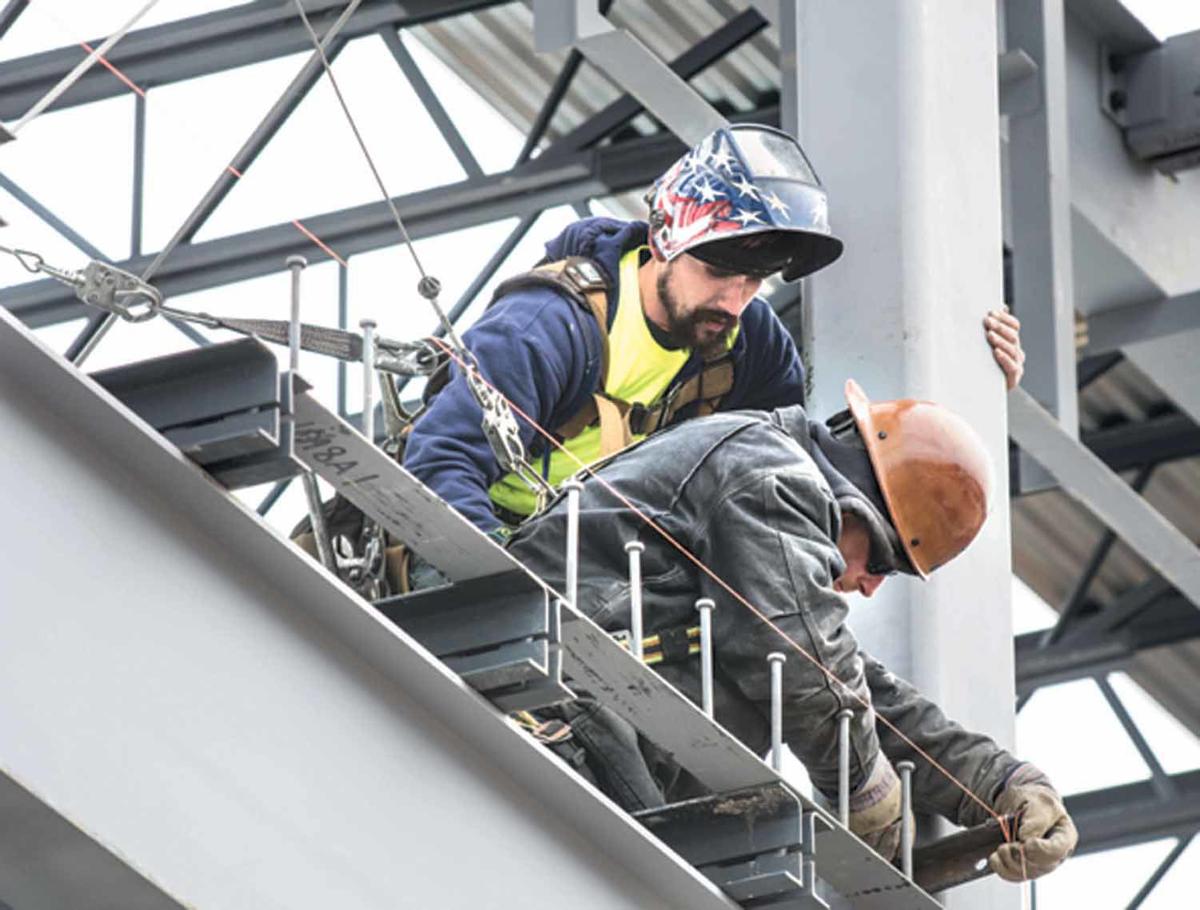 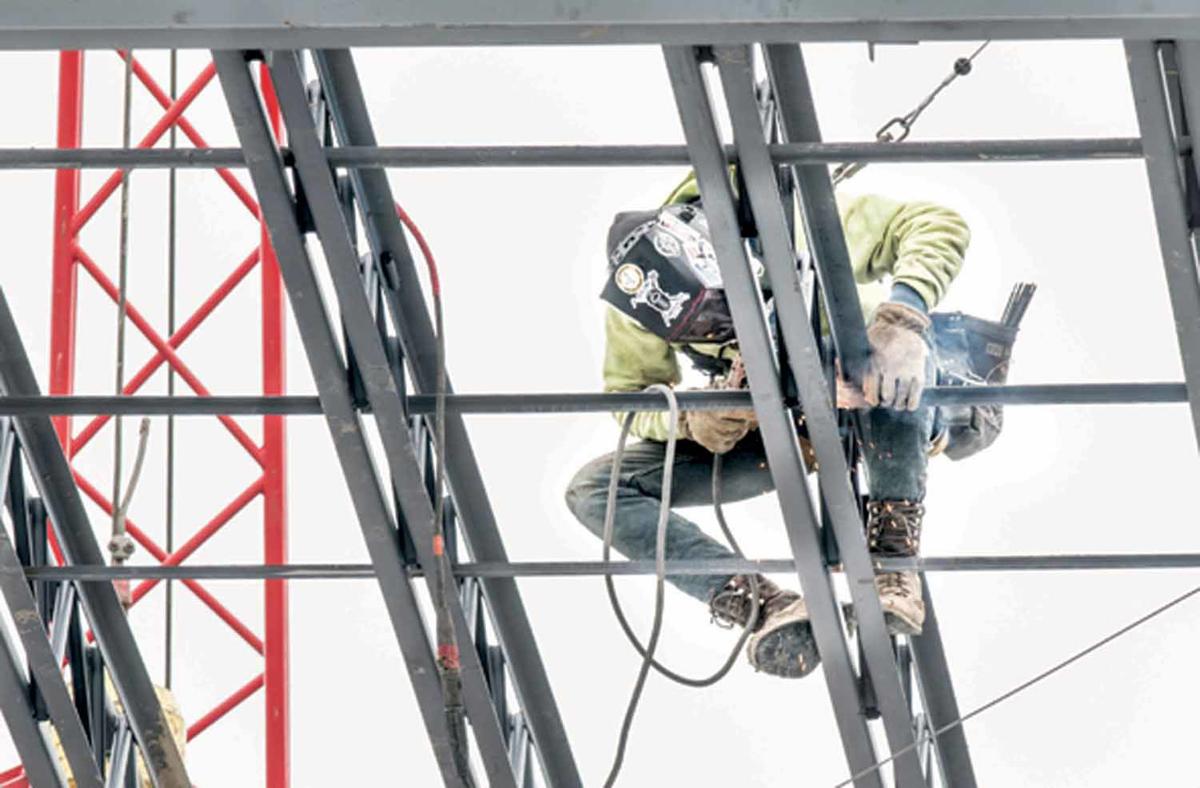 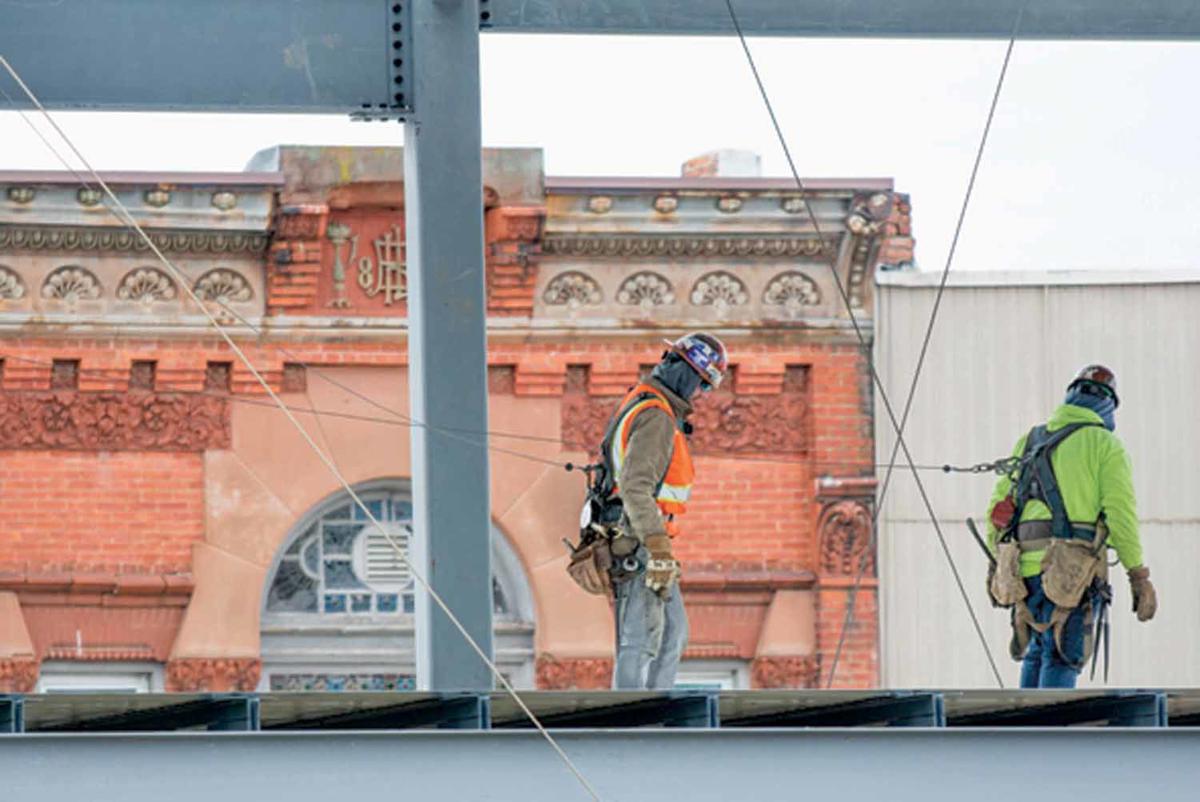 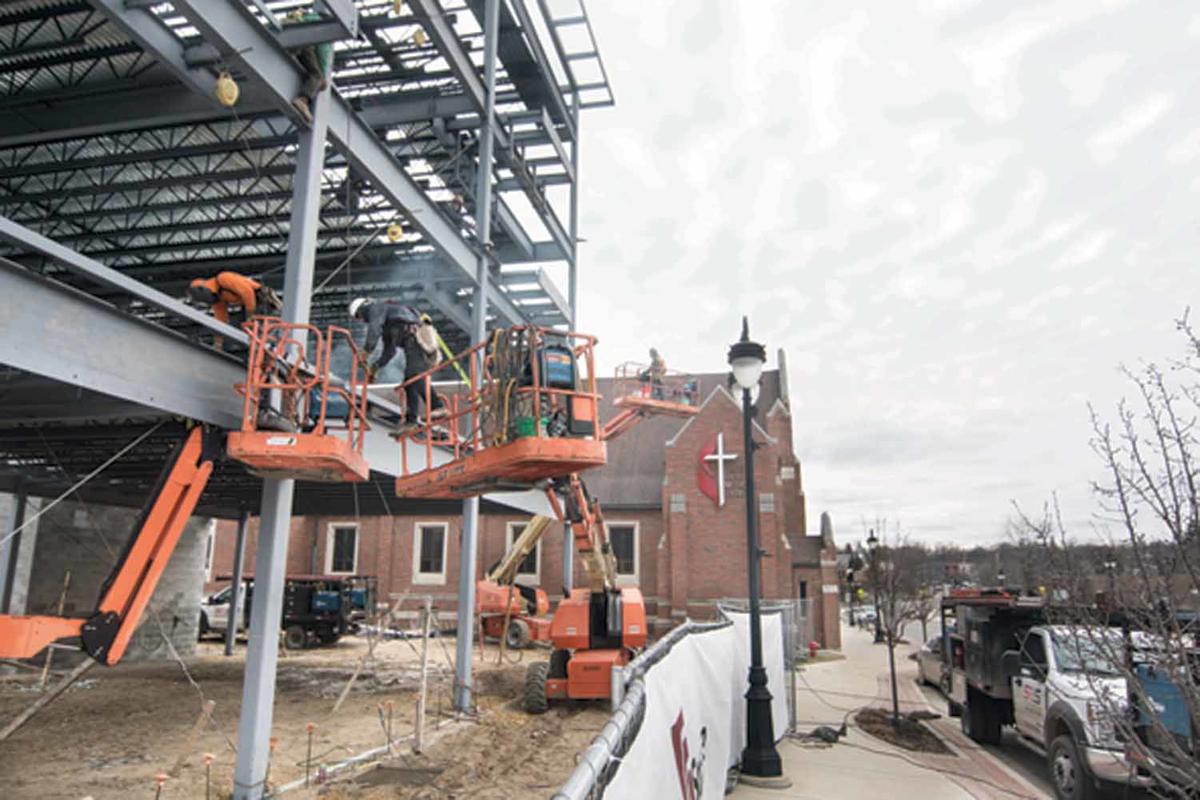 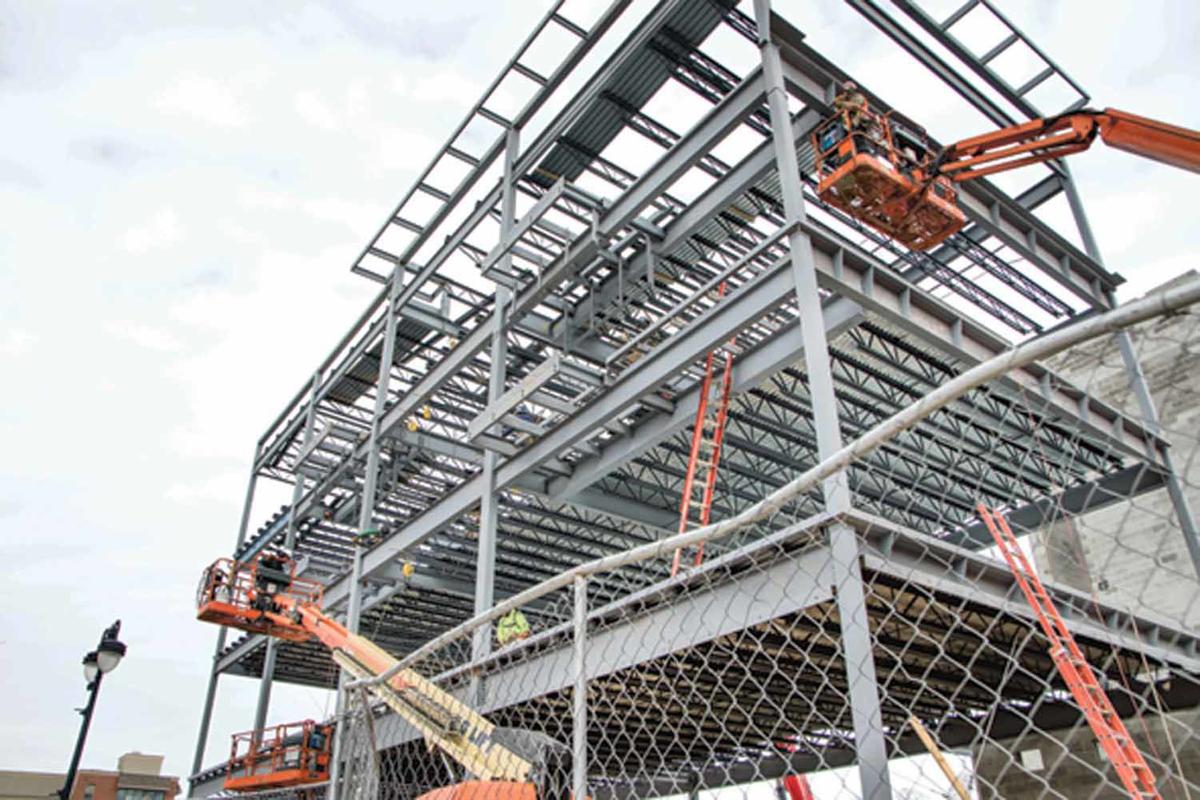 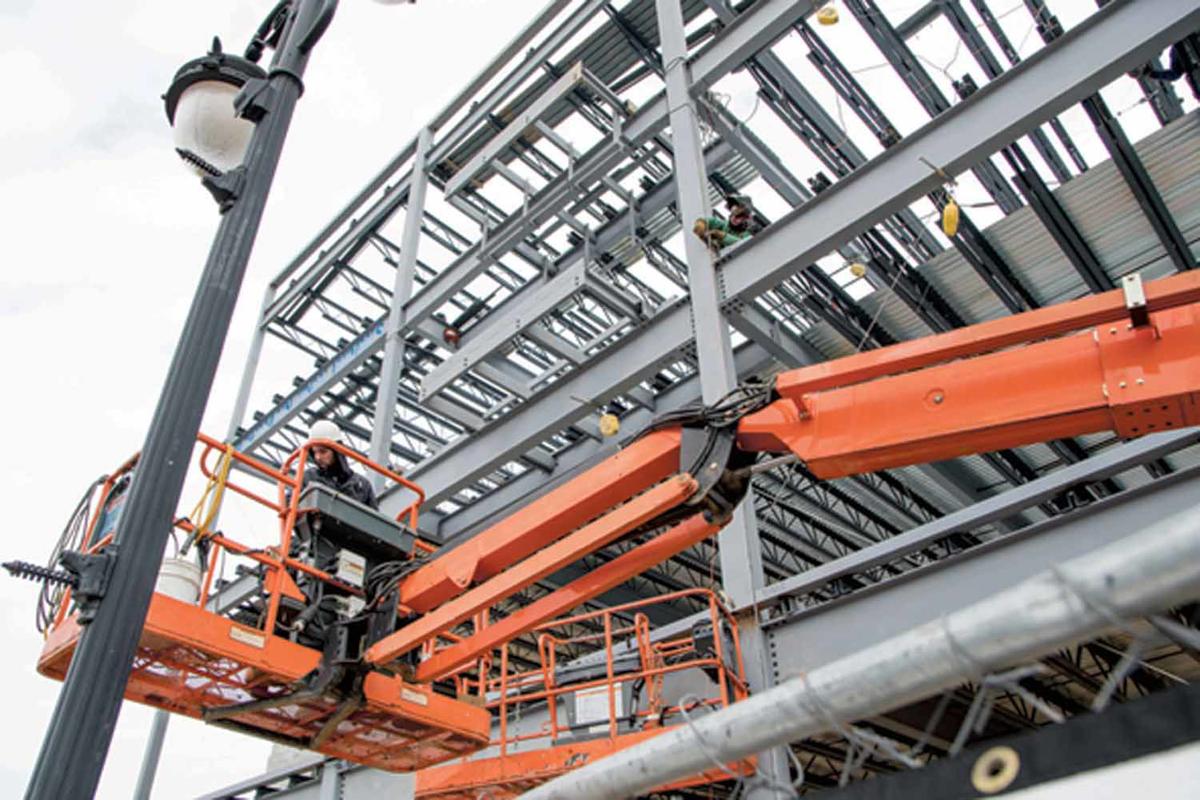 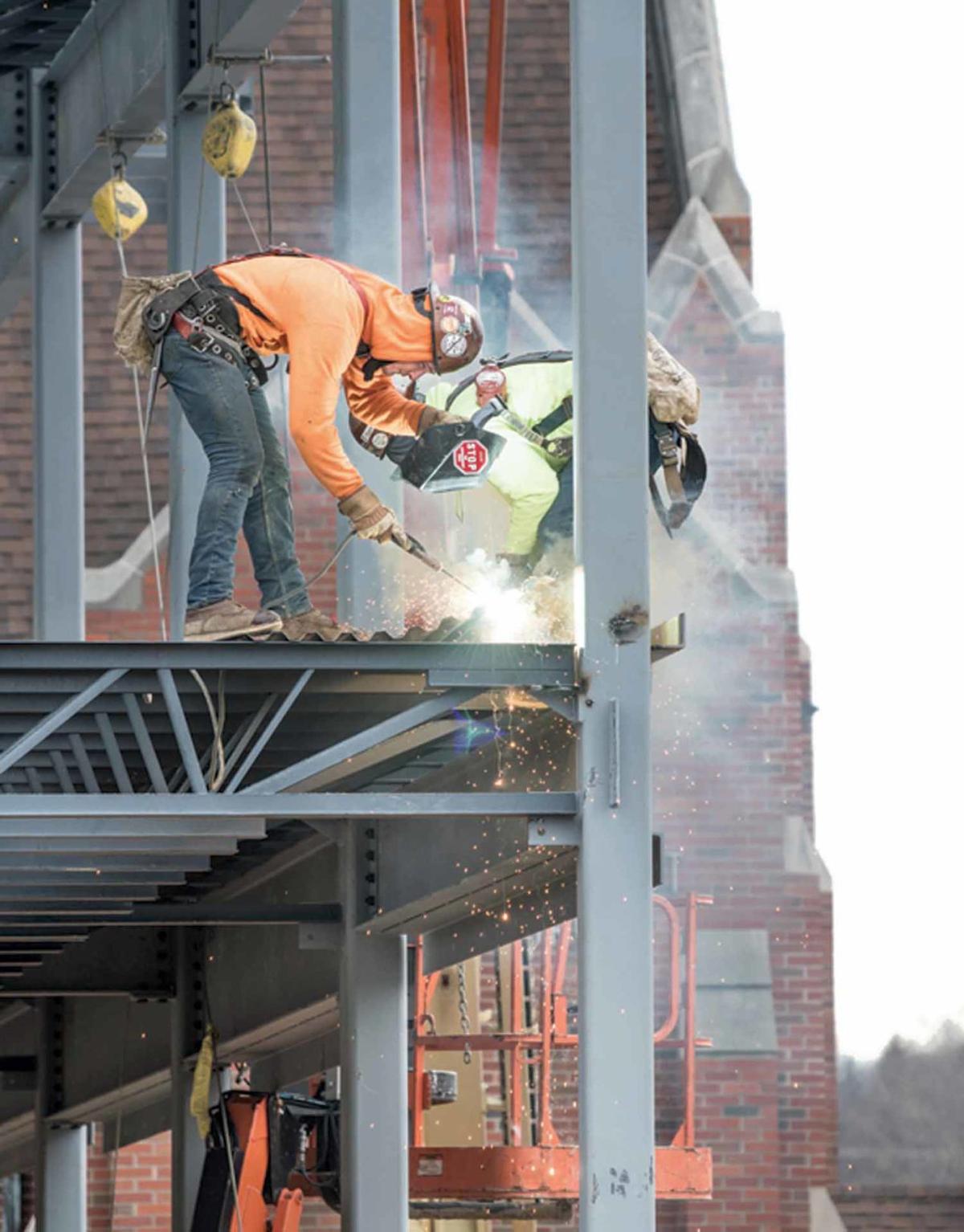 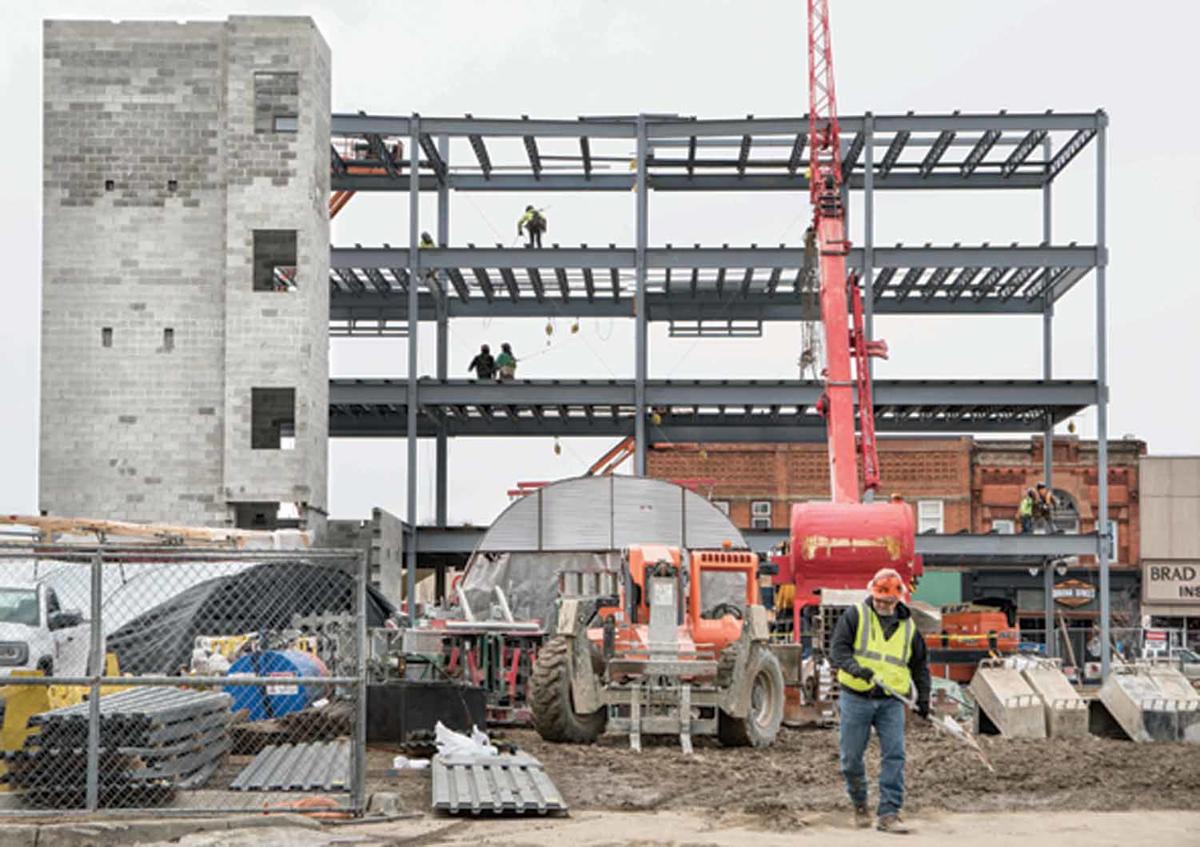 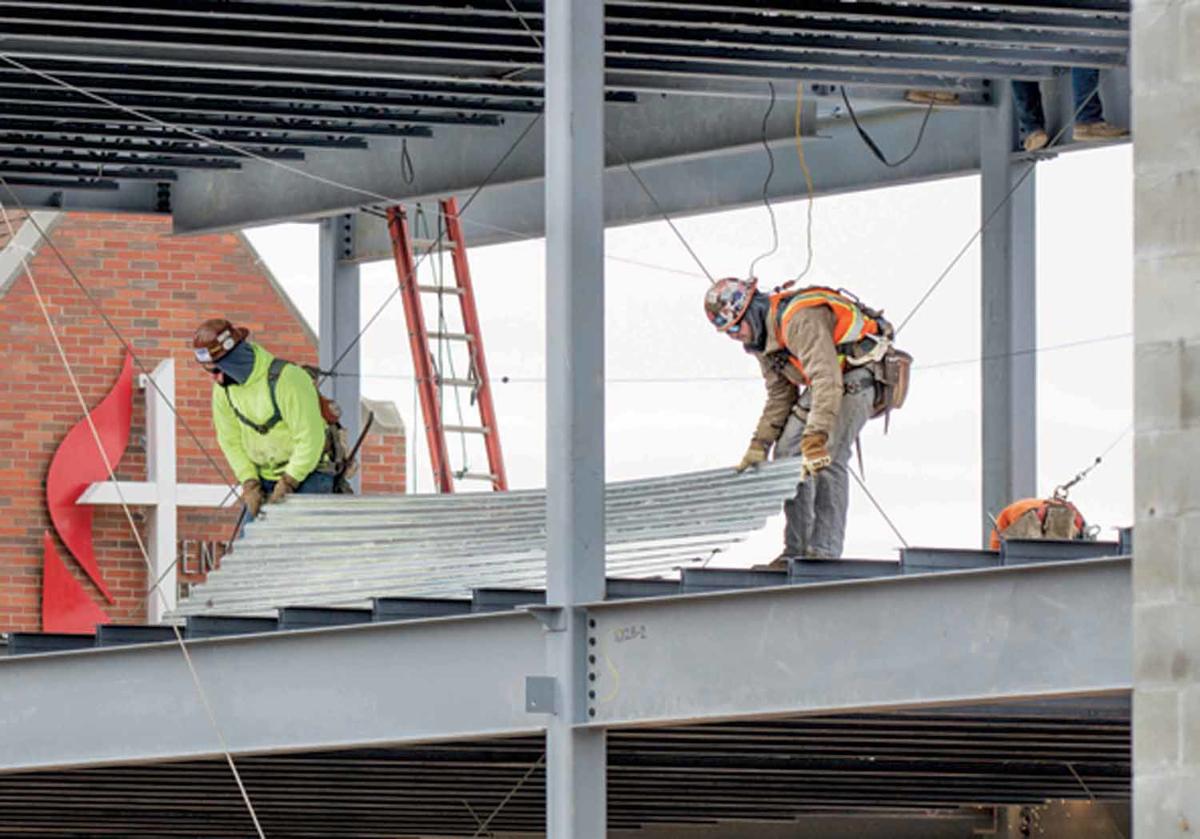 Erecting the steel frame was delayed due to a steel shipment.

Erecting the steel frame was delayed due to a steel shipment.

This building follows the Cornerstone building in 2014 and the Horizon Building in 2018 in significantly altering Fenton’s downtown landscape.

Corlin Builders is the developer for the project. Ghassan Saab is the project manager. Sorenson Gross is the general contractor, which hires subcontractors for various needs.

Saab said they had to wait an extra month for steel, delaying the project, which was expected to be completed this spring. Saab is now aiming for a December date for completion.

Who is moving in?

Corlin Builders are in negotiations with interested parties for the retail space comprising the building’s first floor. There are 10,000 square feet up for grabs, which could be built to suit the business. If not, they will be “white boxes,” generic finished office space ready for someone to modify.

Saab couldn’t give specific names, but he said there are commitments from businesses representing a “mix of uses.” He said a diner, retail and a physical therapy business are in negotiations with Corlin. “Seventy-five percent of the first floor is spoken for,” he said, but added that they may not be fully occupied by the time it is completed.

While the first floor will be retail space, the second floor will be office space. Saab said there’s a company interested in establishing a shared workspace location, similar to WeWork, which creates shared spaces for office work or conferencing.

Originally known as “Cornerstone II,” it’s currently called “The 111 Building,” due to its address on LeRoy Street. Saab said it’s a placeholder until a more permanent name is chosen. The name could reflect the name of the eventual second floor office tenant.

Unlike the Cornerstone building, everything in this building including office and retail will be leased. Instead of condominiums, the 14 apartments on the third and fourth floors also will be leased.

Each renter will have a balcony and a dedicated parking spot behind the building.

Saab said the apartments might attract couples who are downsizing, or those who want to live downtown without the commitment of a home.

There will be about 40 parking spots in the lot for public use, minus the 14 used by residents.

The overall project cost is $7 million. It will be four stories and 10,000 square feet per floor. Retail and office space will be divided as needed.

This week, much of the southern portion of the frame stands. The masons have already built the north and south stairwells. The northern stairwell includes the elevator shaft.

Regarding the look of the building, Saab said, “Physically, we want it to draw from the buildings in the area.” He wants it to mesh with the downtown look while not sticking out unnecessarily, nor blend in. “We know downtown Fenton is a growing hub of different businesses,” he said.

“We took the best parts of the Cornerstone and tried to replicate and improve on them and took the parts that didn’t work and got rid of them,” he said, offering the dedicated building parking, for example.

Anyone interested in leasing in this building can email Ghasaan Saab at gksaab@gmail.com.