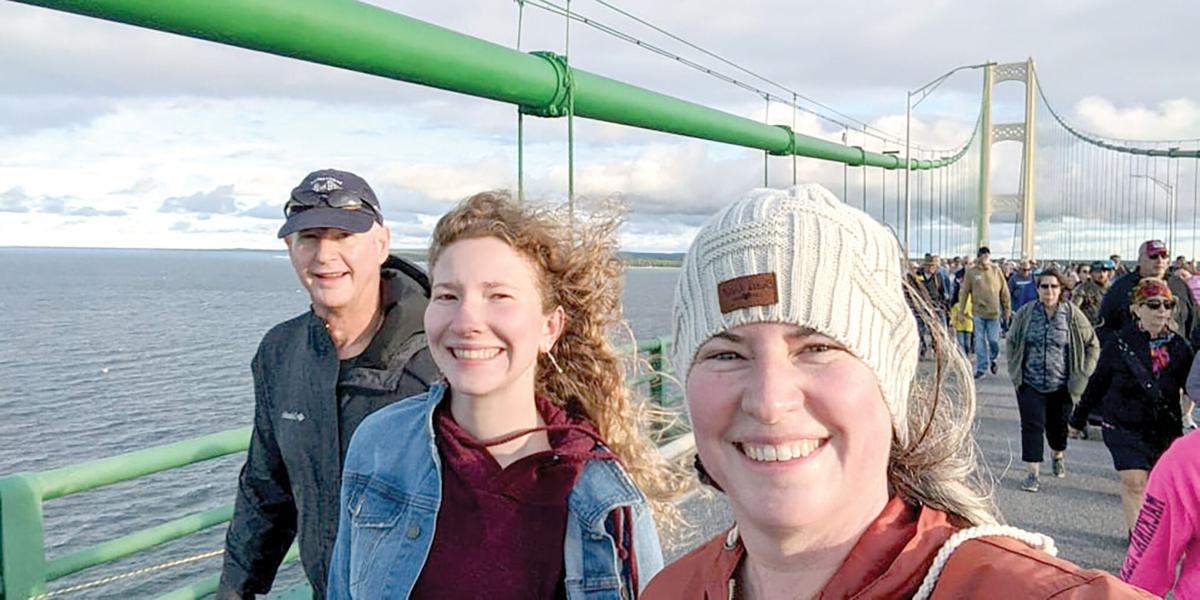 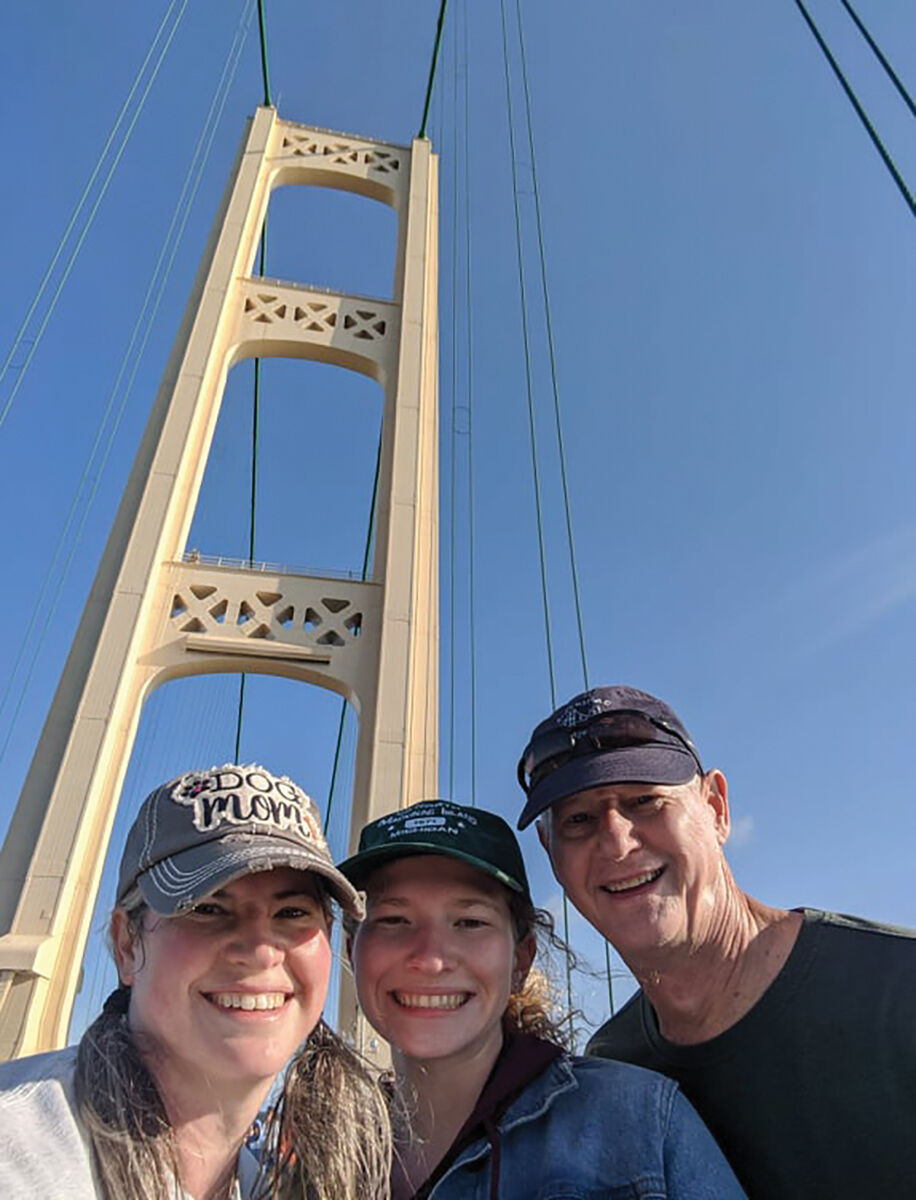 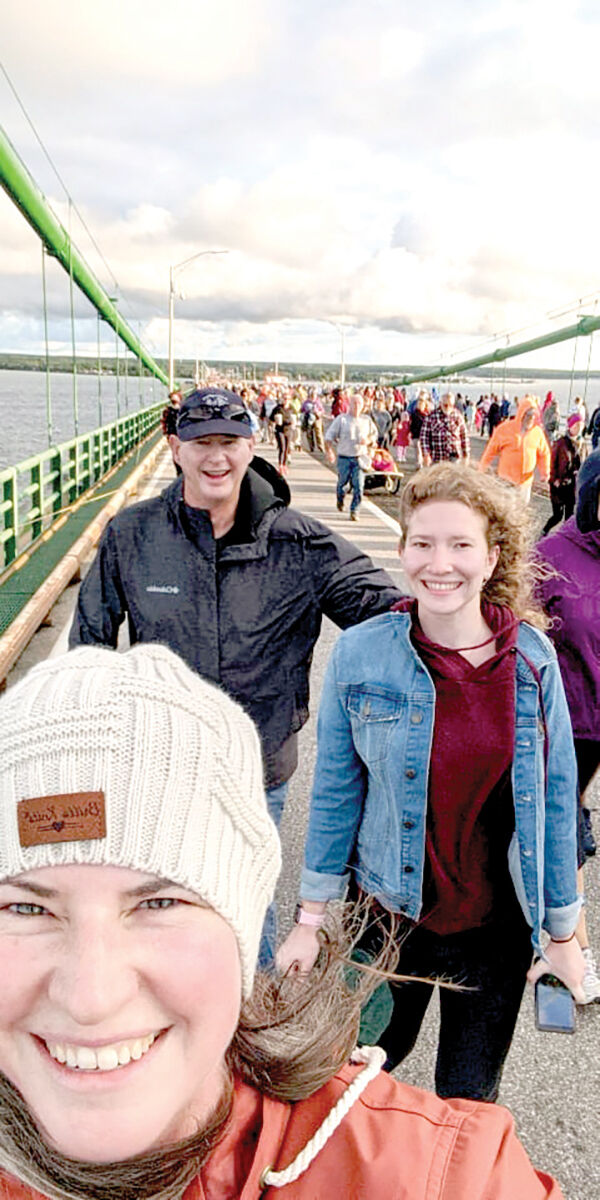 The 2021 Mackinac Bridge Walk was “great,” said local residents who participated in the event on Monday, Sept. 6.

Michigan’s famous Labor Day event was canceled last year due to the pandemic. Walkers were excited for the bridge walk to return this year.

It was Tyrone Township resident Amy O’Rourke-Smith’s first time joining her daughter and father for the annual event, and after the experience, she said she’s going to try to get all of her kids to join her next year.

“Just had an absolute blast. I couldn’t believe I hadn’t been to the U.P. until last year when I lived in Michigan my whole life,” she said. “Everyone was very kind and courteous and friendly.”

Before the walk, she was terrified of crossing the bridge. But after making a few trips across to explore the Upper Peninsula, it became easier.

Her daughter, Eileen O’Rourke, and father Steve Corry, convinced her to join this year.

“They always had fun. They said I should try it,” O’Rourke-Smith said.

Approximately 21,000 people participated, according to the Mackinac Bridge Authority. People had the option of walking half way and turning back, walking the full way across and taking a shuttle back to their car, or walking across and walking back.

This group did the third option. After staying the night in Mackinaw City, they started the walk around 7 a.m., and it took them about an hour and a half to reach St. Ignace. Then they walked back. It’s five miles across the bridge.

The temperature started in the low 60s, but it didn’t get too warm. The group brought water bottles for the walk.

O’Rourke-Smith said she’s “for sure” going to do it again. “I’m going to try to convince the rest of my kids to do it as well,” she said. “I highly recommend it if you’ve never done it. It was fun.”

This was Steve Corry and Eileen O’Rourke’s fifth walk. Corry said there are people who have patches for their 16th or 20th walk, and he met someone two years ago who had a patch from the first Mackinac Bridge Walk.

“For me, personally, it was great because I had new knees. I was more comfortable. It was really nice. We had really nice wind out of the northwest and kept things nice and cool,” Corry said. “It’s a lot of fun.”

He had surgery done on both of his knees in January, and it took until June for them to feel “totally comfortable,” he said.

Corry of Deerfield Township started doing the walk six years ago, and he didn’t want to do it by himself. So he asked his oldest grandchild, Eileen.

“We just went up one year and did it. That was six years ago,” he said. “It’s great exercise. The people are just phenomenal.”

Corry said the Michigan State Police who patrol the area and keep the event safe are “wonderful.”

“We take full rain gear with us when we go and because we do, it never rains. We’ve never been rained on. It rains when we get back to the car, but not when we’re walking,” Corry said. “That’s our superstition.”

They plan on bringing rain gear again next year.

“It’s a vacation destination. You just want to get away up north. Everyone is super friendly. Michigan is the best,” he said.

“Everyone was really friendly. It was beautiful. We got to catch the sunrise going up. It was very windy but super pretty,” she said. They stayed comfortable in sweatshirts against the wind. The walk wasn’t hard, but they did break a sweat.

Her grandfather was the one to suggest doing the walk six years ago.

“He took me up my freshman year. We have gone every year since. It’s tradition,” she said. “And it was the first time for all three of us. It was special. My grandpa wants to get the whole gang up there.”

“I would definitely encourage people to go do it. It’s awesome views. Everyone is super nice. It’s definitely something everyone should try at least one time,” she said.