(Left) Rizzy, packaged as a floral colorant, has surfaced in the drug scene in Detroit. (Above) The Xani bars are being pill pressed to say ‘Xanex’ on them. They are not Xanex though, they are pure fentanyl. 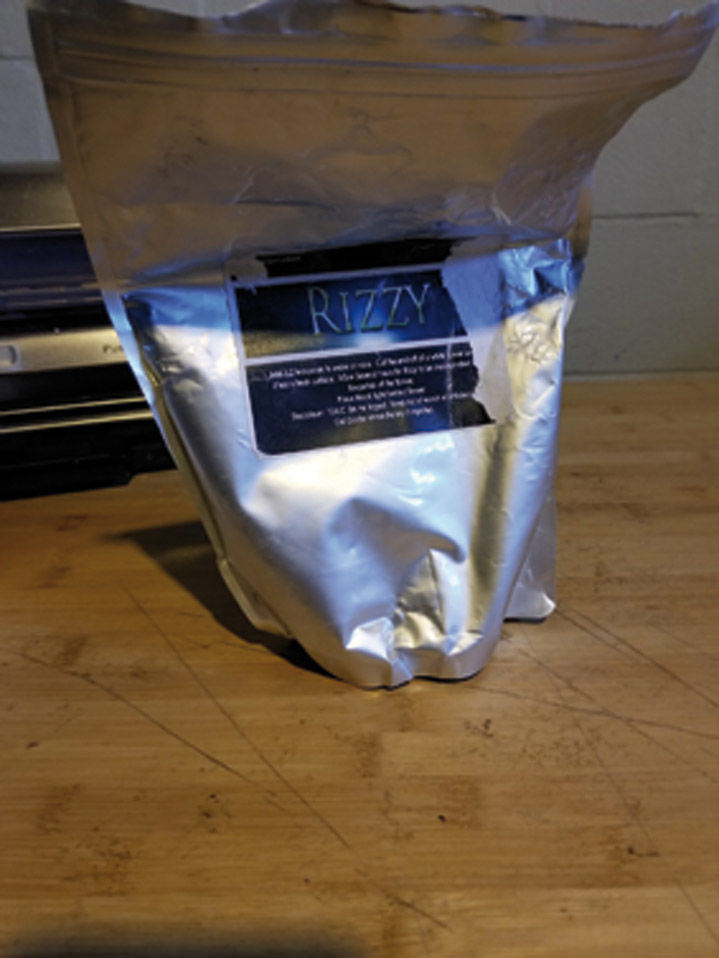 (Left) Rizzy, packaged as a floral colorant, has surfaced in the drug scene in Detroit. (Above) The Xani bars are being pill pressed to say ‘Xanex’ on them. They are not Xanex though, they are pure fentanyl.

This is the second in a three-part series about the growing, and deadly, drug abuse crisis raging across America.

Fentanyl, the prescription drug blamed for the deaths of celebrity singers Prince in 2016, and Tom Petty in 2017, has reached the local area.

Although chiefs in Fenton and Holly say there have been no reported fentanyl overdoses so far in their communities, Linden Police Chief Scott Sutter said there has been one overdose in the last calendar year.

Although he is awaiting autopsy results to confirm, Sgt. Doug Fulton of the Argentine Township Police Department said there have been three or four deaths as a result of fentanyl overdose within the last year.

Fulton said he believes a lot of the fentanyl and other drugs are coming up here from Detroit. When asked about the new scourge on the drug scene, Bromadol (see sidebar), Fulton said he has not yet heard of it.

He talked about a new chemical believed to be making its way to Michigan. “It’s called Rizzy and it eats a person away from the inside,” Fulton said.

When asked why drug dealers would cut their heroin with a substance that could kill their customers, Fulton said. “That’s the question we’ve all been asking.”

Why so much activity in Argentine Township?

“I think it’s everywhere,” Fulton said. “It may not be now but it will be. We could have, said ‘not Argentine’ before, but not anymore. Our communities are getting bigger and there are more people. It’s just a matter of time before the rest of the counties get it.

“We would never have dreamed it would happen in Argentine,” he said.

Although it was once only available by prescription, Narcan can now be purchased over the counter, said Argentine Township Police Chief Dan Allen.

In October 2017, Walgreens announced that it would start selling a nasal spray form of the drug naloxone, which can reverse the effects of opioids in the event of an overdose, without a prescription at all of its pharmacies across the country.

“Narcan, the nasal spray from of nalaxone, will be stocked at all of the more than 8,000 Walgreens pharmacies in the United States,” the company said.

Allen said Columbus, Ohio is the biggest drug hub in this part of the country. Drugs travel from Columbus to Detroit to Flint.

As far as fatal doses, Allen said, “If something kills four or five people, junkies want that. If people die, they know it’s extremely potent and they want to chase that extreme high.”

At a recent training class, chiefs learned about what’s going on in the new drug culture. “It all changes, the clothing, the language …,” Allen said.

“We also learned there are a large amount of pill presses coming across the border,” Allen said.

He referenced the drug Xanax, a little blue pill intended to combat anxiety and panic disorders. Now there are “Xani bars.”

“The Xani bars we’re seeing are being pill pressed to say ‘Xanex’ on them,” Allen said. “They’re kind of dark beige, not brown, and like an oval Tylenol. They are not Xanex though. It’s pure fentanyl.”

Fulton said Argentine Township is involved with the “Hope not Handcuffs” initiative and have so far gotten two people into treatment.

They also are trying to combat the drug problem in Argentine Township through enforcement and tracking down the people selling it.

“We’re doing what we can,” said Fulton. “Through enforcement we can help people, not treat them like dirt bags.”

Fulton said a 27-year-old Linden man’s alleged heroin dealer is off the streets. The suspect, Steven Austin, 26, of Flint, was out on bond for the same crime when he sold the heroin that killed the 2008 graduate of Linden High School, on Saturday, July 15, 2017.

Austin is currently in custody. According to Genesee County court records, he was charged on July 22, 2017 with three counts of possession with intent to deliver cocaine/heroin/another narcotic 50 grams; and one count of weapons-felony firearms possession. His case has been transferred to Genesee County Circuit Court. The Times will be following Austin’s case.

Narcan or naloxone is an opiate antidote. Opioids include not only fentanyl but also heroin and prescription painkillers that include morphine, codeine, methadone, and oxycodone. It’s important to understand however that if someone has overdosed on a drug that’s not classified as an opioid, Narcan will not work, according to The Recovery Village.

Brighton schools announced last week that its high school staff is being trained in the administering of Narcan. Other Livingston County school districts like Howell and Fowlerville already have police resource officers trained in Narcan use and Hartland is comfortable with the close proximity of law enforcement trained to administer it if and when needed.

chronic pain who are physically tolerant to other opioids. In its prescription form, fentanyl is known by such names as Actiq, Duragesic, and Sublimaze. Street names for fentanyl or for fentanyl-laced heroin include Apache, China Girl, China White, Dance Fever, Friend, Goodfella, Jackpot, Murder 8, TNT, and Tango and Cash. On the street, fentanyl is sold in the following forms: as a powder; spiked on blotter paper; mixed with or substituted for heroin; or as tablets that mimic other, less potent opioids.

Fentanyl works by binding to the body’s opioid receptors, which are found in areas of the brain that control pain and emotions. Its effects include euphoria, drowsiness, nausea, confusion, constipation, sedation, tolerance, addiction, respiratory depression and arrest, unconsciousness, coma, and death. The high potency of fentanyl greatly increases risk of overdose, especially if a person who uses drugs is unaware that a powder or pill contains fentanyl because a supplier may have cut some into heroin or other drugs.

Police in Ohio last week sent a warning to other departments after the skin on a man’s arms was eaten away, possibly by a new heroin combination. NBC4i.com and several news agencies have reported that the man was possibly injured by heroin laced with Rizzy powder. The man’s arms were blackened, and some of his skin was eaten away. Narcotics officers noticed the injuries after arresting a heroin addict last week. The man told officers that he bought heroin laced with Rizzy powder and injected it.

Rizzy powder is a flower centerpiece maker. For white flower centerpiece, add 1/2 teaspoon to water in vase. Cut the end off a flower so that it has a fresh surface. Allow several hours for Rizzy to be incorporated into the petals of the flower. Also included on the site is the disclaimer, “Toxic. Do not ingest. Keep out of reach of children. Call Doctor immediately if ingested.”

Police say the use of Rizzy with heroin is so new that all of the dangers are still unknown.