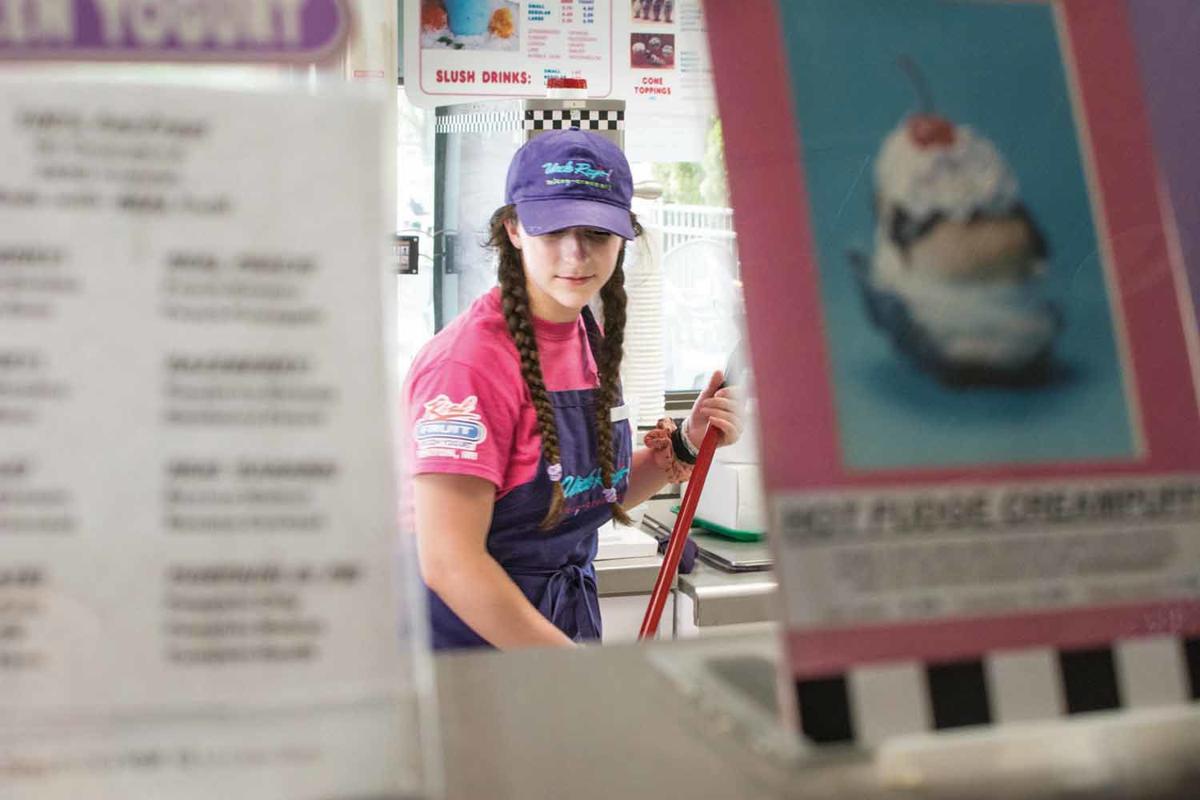 Olivia Beadner, 17, of Grand Blanc Township sweeps the floors at Uncle Ray’s Dairyland on Wednesday, July 17. This is Beadner’s first job, and her second year at the ice cream and mini-golf business. Uncle Ray’s hires 10 employees per year, and most are teens. 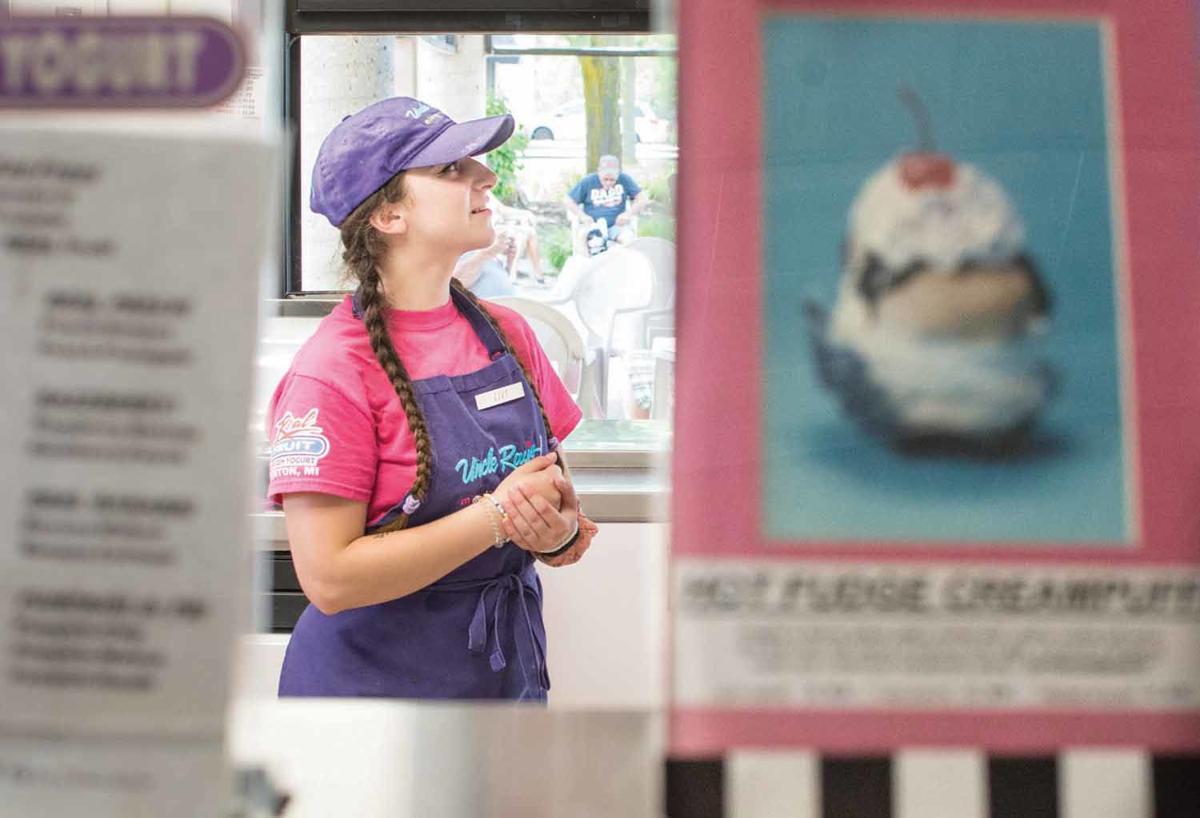 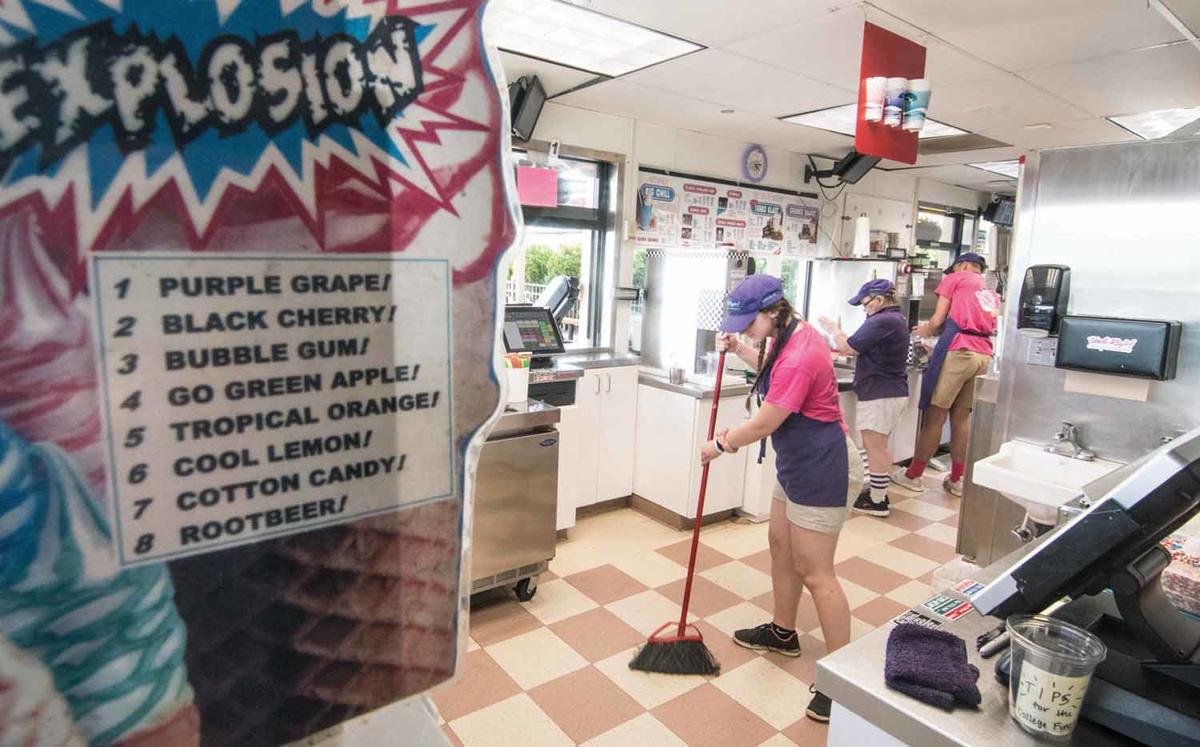 Olivia Beadner, 17, of Grand Blanc Township sweeps the floors at Uncle Ray’s Dairyland on Wednesday, July 17. This is Beadner’s first job, and her second year at the ice cream and mini-golf business. Uncle Ray’s hires 10 employees per year, and most are teens.

Still, the Howell High School student never stopped smiling as she handed off drinks and bags of food, the kitchen bustling behind her.

Brendel lives in Deerfield Township, and is working to afford a car, clothes, and the more than $7,000 tuition she’ll pay to go to cosmetology school. She eventually wants to be a nurse.

She is part of a segment of summer employment that has shrunk — teens seeking summer jobs. McDonald’s owner Mark Pfau has 13 restaurants, including those in Fenton and Linden. He employs 700 people and said until the recession of 2009 half were teenagers. Now the number is more like 15 percent.

According to the Bureau of Labor Statistics (BLS), youth labor force participation rates peaked historically at 77.5 percent in 1989. It was 60 percent in July 2018.

“The days of teens taking jobs in the summer to earn extra money are largely gone,” said Chris Douglas, University of Michigan-Flint, associate professor of economics.

The recession caused more adults and seniors to seek entry-level jobs, so there weren’t as many for teens. Douglas said that technology and improving automation has also eliminated some entry level jobs. While the economy is improving, the teens aren’t necessarily returning for work.

Volunteering and extracurricular activities are taken on to bolster college applications. Today, he said an internship is viewed as more important than a summer job.

Pfau sees the summer job as an important learning experience. “(McDonald’s) is a great first job because it teaches people how to show up on time, how to be dependable,” he said. Customer service and teamwork are necessary skills and the basics for future jobs. Their tuition assistance is another incentive to work there.

His first real job was as a janitor for a business, where he learned that even at a very young age, people still depend on an individual to do their job.

Mason Webb, 18, of Fenton Township is working at Uncle Ray’s Dairyland in Fenton as his first job for extra spending money. On the same Wednesday afternoon shift, Olivia Beadner, 17, of Grand Blanc Township, is going into her second year on staff, but this was her first job.

Uncle Ray’s Dairyland owner Dave Durant said he gets 60 applicants each year and most are teenagers. “The perception is it’s a teenager’s job,” he said. From this pool he’ll hire 10 people. Over 41 years in the business, he believes applications have been steady. Durant said he has students who work and also have extracurricular activities. “They’re not bored,” he said. “They are busy – they’re the doers.”