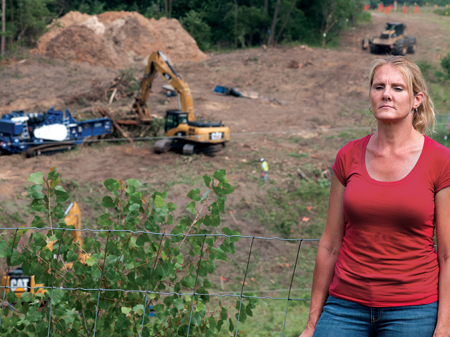 Debora Hense stands on her land, with pipeline work going on across the street behind her. Similar equipment destroyed some of her trees Wednesday. 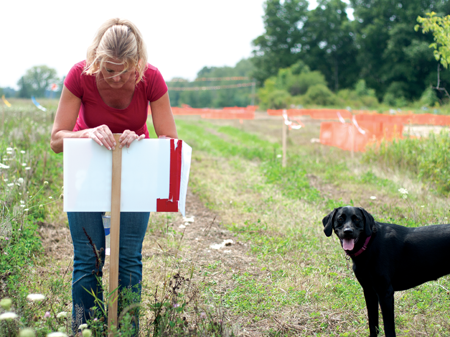 Debora Hense replaces the “No Access” sign on her property Thursday afternoon. This area of her land is not within the original permanent easement.

Debora Hense stands on her land, with pipeline work going on across the street behind her. Similar equipment destroyed some of her trees Wednesday.

Debora Hense replaces the “No Access” sign on her property Thursday afternoon. This area of her land is not within the original permanent easement.

Tyrone Twp. — Debora Hense made a quick trip for a cup of coffee Wednesday morning and was met with the roar of machinery and 50-foot trees being ripped from the ground when she arrived back home.

Hense called the police and provided a previous legal document that prevented Enbridge from working on her property. But Hense’s property was already ravaged – a clearing of about 200 yards had suddenly become a gravesite for nearly 80 trees. Tracks from heavy machinery are still embedded in the earth, leaving the ground fissured near a pipeline that runs through her property.

“They waited until I left to start working, knowing they weren’t allowed to do this,” Hense said of Enbridge, the company responsible for the damage on her property.

Enbridge, a pipeline company based in Canada, is undertaking a massive project of installing a new pipeline, which runs through Tyrone Township and Hense’s backyard. Spokesperson Joe Martucci said under a 1968 easement agreement, Enbridge has the right to work around the 60-foot easement, even if it includes people’s yards or private property.

But Hense said she never granted Enbridge permission to tear down trees or encroach onto her property.

“They can do all this work on the easement, they don’t need to go onto my property,” Hense said.

Martucci said Hense was informed in advance of Enbridge’s future activity on her property. Enbridge made numerous offers to Hense, including a $40,000 deal to use her property, but all offers were declined. Martucci said the project serves the public interest as the pipeline distributes oil to companies throughout the Midwest. Martucci used the Marathon refinery in Detroit as an example of the pipeline’s benefits to the state.

“Energy is a critical part of the economy in the Midwest. The oil in this pipeline is used for jet fuel, asphalt and a host of other petroleum based products,” said Martucci, who noted that the project has been approved by the Michigan Public Service Commission. “We have the right to use property adjacent to the pipeline.”

Hense disagrees that installing a new pipeline is in the best interest of the public.

“This project is not for the common good; it’s to line Enbridge’s own pockets,” Hense said. “They’re not a public utility.”

Hense is suspicious that the pipeline is polluting her land, noting the number of dead trees and grass near the easement.

Last month, the National Transportation Safety Board reported that Enbridge was responsible for a 2010 pipeline rupture that spilled more than 840,000 gallons of crude oil into the Kalamazoo River in Marshall. The Michigan Department of Community Health reported that more than 300 individuals experienced health problems due to exposure of toxic materials.

Whatever the outcome, Hense knows that Enbridge will work on the pipeline and subsequently, on her property. She will face Enbridge in court on Sept. 25 with the hopes of establishing what Enbridge can and cannot do while working on the pipeline.

“I want them to pay for the damages they’ve caused,” Hense said, adding that she will restrict Enbridge to only working on the easement. “What Enbridge did to us is unlawful and illegal.”

Landowner, talk to me about how to get these foreign predators off of your land![wink]

The organization is the biggest common gas wholesaler in Canada and a significant oil pipeline administrator in North America. Moreover, it had contributed renewable vitality ventures. It likewise constructed the athabasca pipeline from northeastern alberta to the fundamental pipeline framework.
free grammar and spell check