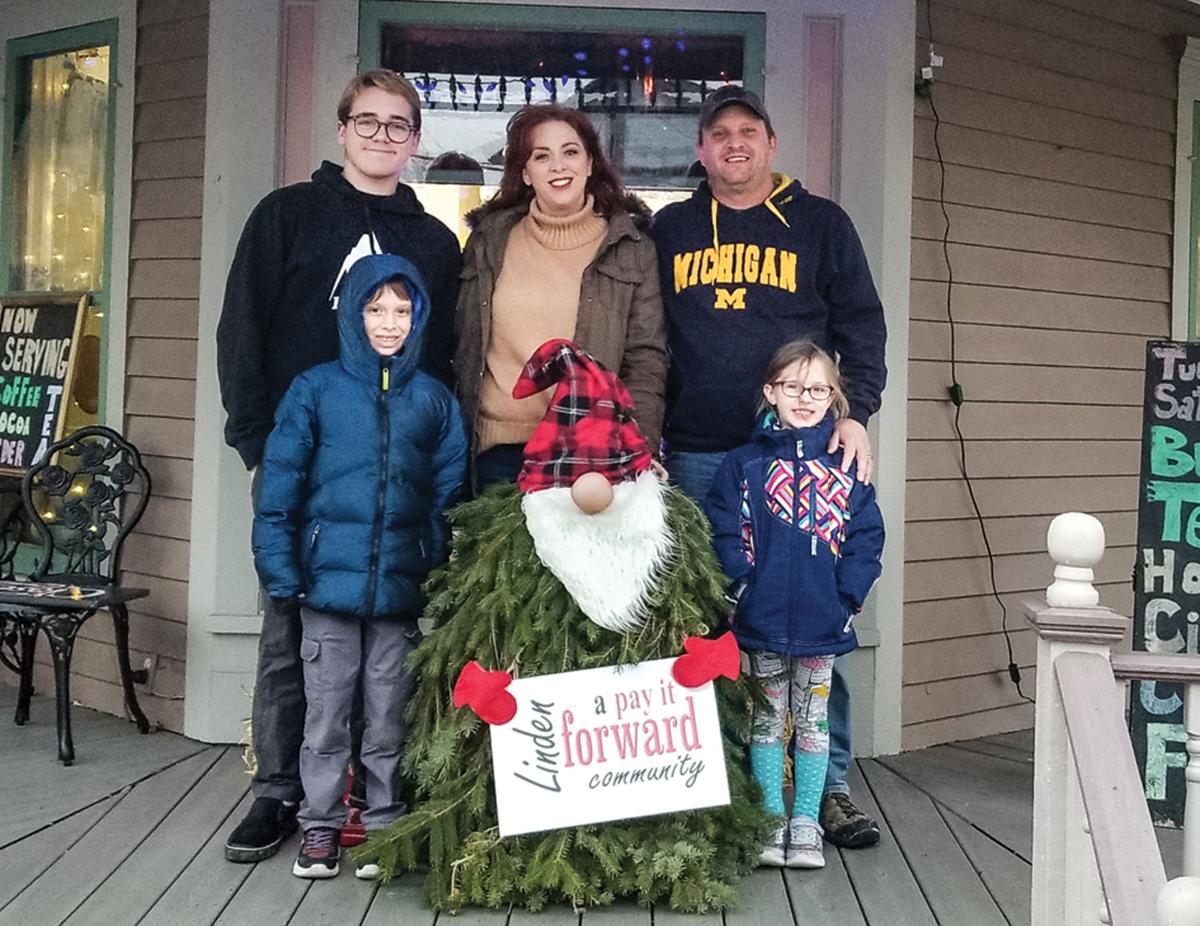 Linden residents Stephanie and Chad Johnson stand with their children, Michael, 17, Max 7 and Madelynn 5. They moved to Linden in late July. 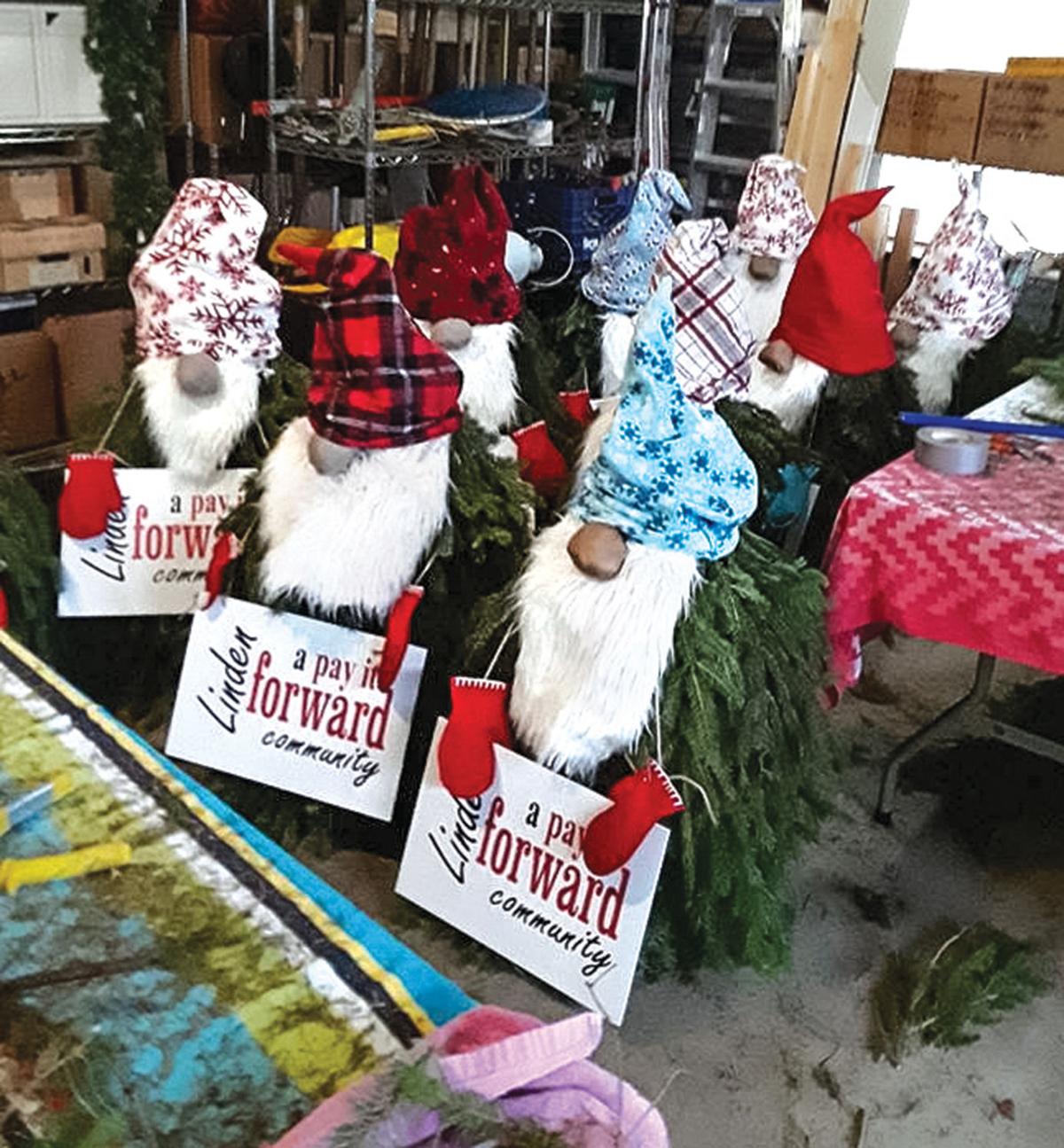 Pictured above are a few of the Christmas gnomes Linden residents can expect to see around the city during the holidays.

Linden residents Stephanie and Chad Johnson stand with their children, Michael, 17, Max 7 and Madelynn 5. They moved to Linden in late July.

Pictured above are a few of the Christmas gnomes Linden residents can expect to see around the city during the holidays.

Along with festive wreaths hung on light poles and a Christmas tree to be lit at the old Fairbanks gas station property this Sunday, Linden also is getting into the holiday spirit with Christmas gnomes.

It started at Linden Pay It Forward’s annual fundraiser Fire & Ice, when Chad and Stephanie Johnson, who moved from Arizona to Linden in late July, saw that a gnome was part of the silent auction.

“I thought, ‘oh my gosh, he’s so cute.’ I told my husband we had to have him,” Stephanie said.

The bid turned into a fun game between them and Linden Kitchen & Bath, but ultimately the Johnsons won.

However, Stephanie said the 4-foot gnome was “too cute” to only stay on their porch, so they let him stay at Linden Kitchen & Bath for a few days. After that, the Johnsons received emails asking if the gnome could go to other businesses and events.

“They decided it would be fun to have the gnome move around town and visit different places to get acclimated to his new home,” said Denise Marks, who runs Pay It Forward. “In the process, I named him Roman RoundTown.”

Roman the gnome won’t be the only Christmas statue in town.

“Every few days, Roman is visiting different Linden businesses or community events while he waits for the rest of his 26 family members to arrive next weekend. The Pay It Forward gnome tribe will be adorning the sidewalks and porches of Linden for the upcoming holidays,” Marks said.

This weekend, more of the gnomes will arrive and Linden residents can expect to see them around the city.

“It’s a rather massive fundraiser as gnomes have been purchased and sponsored by community members for the downtown area,” Marks said. “Each gnome will have a unique name and we will be working with elementary teachers at Linden for classrooms to adopt one of the gnomes and be sure they are properly cared for during their Linden visit.”

Stephanie said it’s been great for their family and kids in helping them be a part of a new community.

“With Pay It Forward, we couldn’t have asked for anything better to get out there and make our mark on the community. I think it’s just been a wonderful experience. Everyone’s been so welcoming. My husband and I like to be goofy and have fun, and having the community right behind us is fantastic,” Stephanie said.

She doesn’t yet know where Roman will be during all Linden holiday occurrences, but the big event will be during the parade at the Linden Holiday Happening Frosty Parade on Friday, Dec. 6, when “Father Gnome” will be on the Pay it Forward float. This gnome is 6 feet tall.