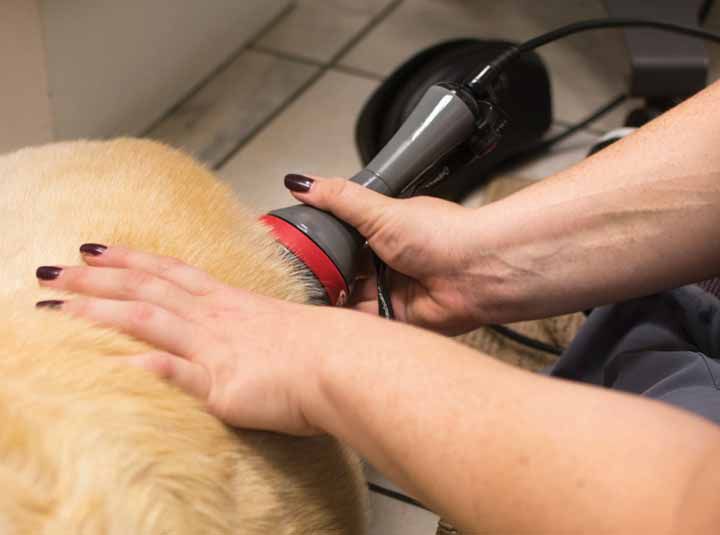 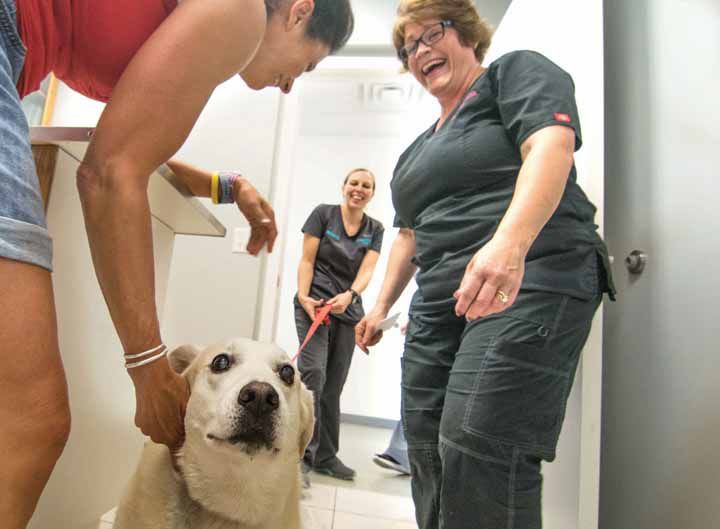 Paulette Hoose of Fenton takes her 11-year-old lab Winnie for a blood draw at Animal Health Clinic in Fenton on Wednesday, Sept. 20. Winnie suddenly didn’t want to have her blood drawn and decided to sit instead. 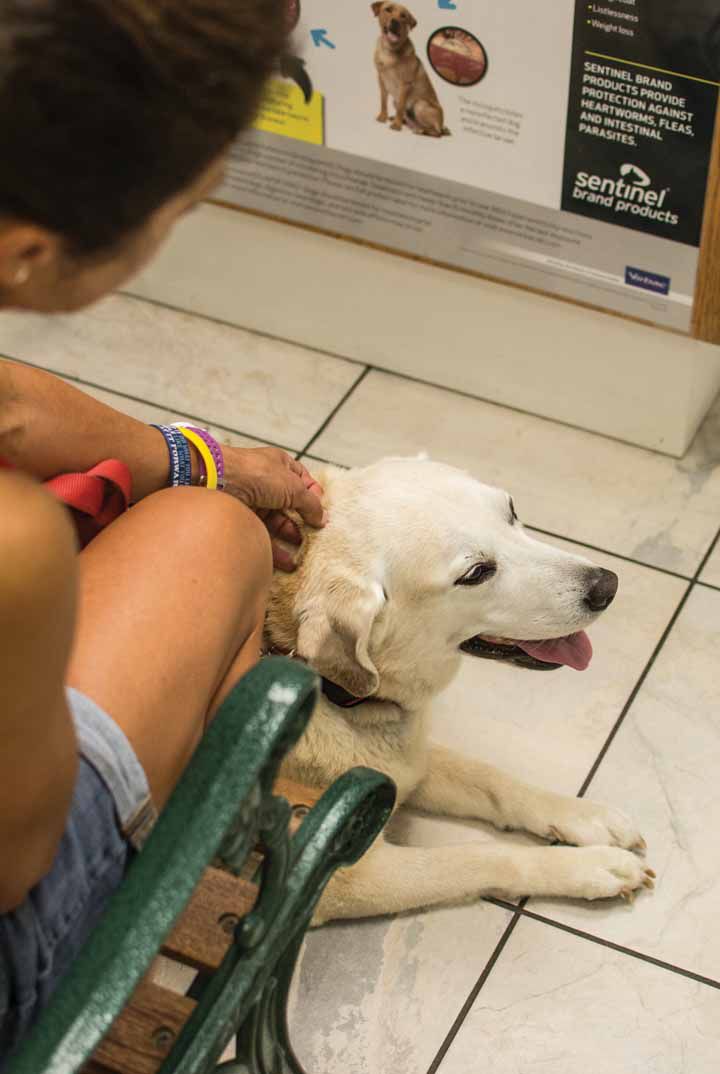 Winnie the yellow lab waits with owner Paulete Hoose of Fenton for her appointment on Wednesday, Sept. 20. Winnie has some health problems in her senior years that the family takes care of. 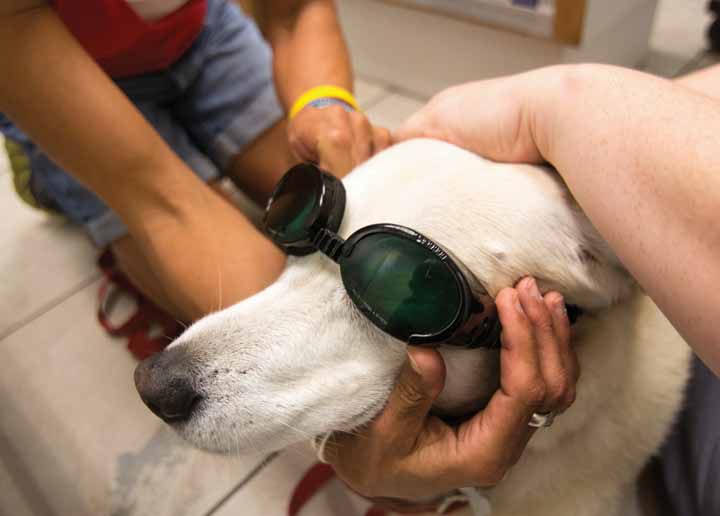 For her laser therapy treatment, Winnie must wear protective goggles.

Paulette Hoose of Fenton takes her 11-year-old lab Winnie for a blood draw at Animal Health Clinic in Fenton on Wednesday, Sept. 20. Winnie suddenly didn’t want to have her blood drawn and decided to sit instead.

Winnie the yellow lab waits with owner Paulete Hoose of Fenton for her appointment on Wednesday, Sept. 20. Winnie has some health problems in her senior years that the family takes care of.

For her laser therapy treatment, Winnie must wear protective goggles.

Mark Sullivan of Argentine Township remembers very well the last day on earth that he was able to spend with his dog, Brandy, a German shepherd who was 10½ years old at the time and riddled with cancer and arthritis.

“I stayed home from work and called the vet in the morning,” said Sullivan. “Sandy (Dr. Sandy Smith of Animal Health Clinic) couldn’t come to the house until the end of the day. I wondered how I was going to wait all day long.

“But it was the greatest day I ever had with that dog,” said Sullivan. “We did everything — a short walk, a ham sandwich, a plain McDonald’s hamburger. It was her day. We got to pet her and kiss her while they injected her. She was gone in an instant and then I cried my heart out.”

Sullivan’s deep emotions regarding the day his dog was euthanized strikes a familiar chord with just about anyone who has ever lost a beloved pet to euthanasia — commonly known as “putting a dog to sleep.”

“We prefer to use the more professional word ‘euthanasia,’ because associating it with sleep scares kids,” said Sandy Smith, DVM, a veterinarian for 32 years.

“I’ve had to deal with it a lot, both personally and professionally. I’ve never had a healthy pet in my life. My 11-year-old dog was a diabetic when he was brought to me as a 4-month-old puppy. My cat was brought to me at 6 weeks

old when the owner stepped on her and wanted me to euthanize her. She’s now 17 years old.”

Smith feels that people who have to euthanize their pets are an underserved part of her practice, and she recognizes their emotions and anguish. “Many people like me don’t have children and their pets become that to them, even if they have kids. They’re never ‘just a dog’ or ‘just a cat,’” she said.

She provides a comfort room at her veterinary practice in Fenton where the euthanasia takes place and allows the family to stay with them as long as needed to mourn their pet. She’ll also go to a client’s home to euthanize their dog or cat, if owners don’t want an office visit to be their pet’s last life experience.

Other people can choose to have a mobile veterinarian come to their home who specializes in euthanasia services. After one local family’s recent ordeal, it’s suggested that a person gets referrals from other families who have used services and were satisfied.

There are also several options after the euthanasia itself, including group cremation, private cremation, taking the pet’s body home (likely for home burial, but rules differ in each municipality). Faithful Companions Pet Cremation Services provides many local veterinarians and private individuals with these cremation services.

“We take ink and make a paw print, and send it with a poem and sympathy card to the family,” said Smith. “We also make a donation to the MSU (Michigan State University) Companion Animal Fund or the charity of the family’s choice, in the case of long-time patients. All the plans are made in advance so that families can spend the time they need with their pet.”

How do you know when it’s time?

“It’s the hardest thing to do, but it’s a must when it’s the right time,” said Sandy Leone of Fenton, who has had to euthanize three of her family’s dogs. “For me, the biggest sign was when all of a sudden they just didn’t want to eat. The look in their eyes told me it was time to go to the gates of the ‘Rainbow Bridge.’”

She has special memories of her Springer Spaniel, Mandy, who had cancer. “There was only so much we could do for her,” she said. “I knew one morning it was time to say goodbye. My dear friend, Mary, came over to see her and took one look at Mandy and told me it was the only time I could play God. The next day, I embraced her as she passed on. I felt her become free of all pain. Trust me, it never gets any easier, but we have to think about our pets, not ourselves.”

“The best guideline is when they’re not having fun anymore, and you know they won’t be getting better,” he said. “Very rarely do I ever have to make that decision for someone. They know that ‘today’s the day.’”

Sometimes, the hard reality of finances get in the way of being able to treat a dog or cat for serious life-threatening illnesses like kidney disease or cancer — two of the biggest end-of-life issues for dogs. “Arthritis is the third,” Repke said. “Then liver, heart or other diseases.”

There has to be a balance between the money spent and the quality of life. Repke said, “Are we really going to help the dog by having this treatment?”

In many cases, the answer is no. “In the case of many cancers, most families don’t opt for treatment,” Repke said. “Sometimes chemo only gives the pet three more months, and a lot of that time is spent driving back and forth to treatment.”

For Joel and Paulette Hoose of Holly Township, treating both their senior dogs for a variety of ailments has been worth it, in terms of quality of life for both them and their pets.

“Winnie’s an 11-year-old yellow lab with an arthritic back which Dr. Sandy treats with laser therapy,” Paulette said. “She’s also got thyroid issues.”

Their other yellow lab, 13-year-old Maizey, is a joint cancer survivor. “We went to a couple of specialists and ended up having her back left leg amputated to keep the cancer from spreading,” Paulette said. “She also had a year of chemo. Now she’s cancer-free and a success story. She actually gets along better on three legs than Winnie does with her arthritis.”

Both of these “seniors” still wag their tails, enjoy car rides and have a good quality of life. “We know their time is coming, but as long as they’re eating and enjoying things, we keep going on,” Paulette said.

What's being said on social media

Sandy: It is the hardest thing to do but it’s a must when it’s the right time. As a pet owner putting down three of my beloved dogs you always know when it’s time.

Natalie: We had to put our dog of 12 years down two years ago due to a fast growing facial tumor. We gave him the best last day.

Courtney: It definitely was not an easy decision to make. But I knew it was best for him as I would have been keeping him alive for selfish reasons.

Kimberly: We just put our yellow lab down about a month and a half ago. It is the hardest decision to make! It was very hard for my daughter who is 22 and was very attached to him.

Jean: We had to put down one of our dogs down June 9, due to a back injury. I think of him daily. We still feel the loss of his presence. We knew it had to be done. It didn’t make it and easier.

Pam: The most difficult decision ever. You know when it’s time, your pet will silently let you know.

Gail: It’s like losing a member of your family. I still think of all my dogs from the past 50 years that became a big part of my life. Miss them all.

For pet loss support groups, check first with your veterinarian. Here is a sampling for several in Michigan, from Petpartners.org:

• Beyond the Paw Print, Farmington Hills,