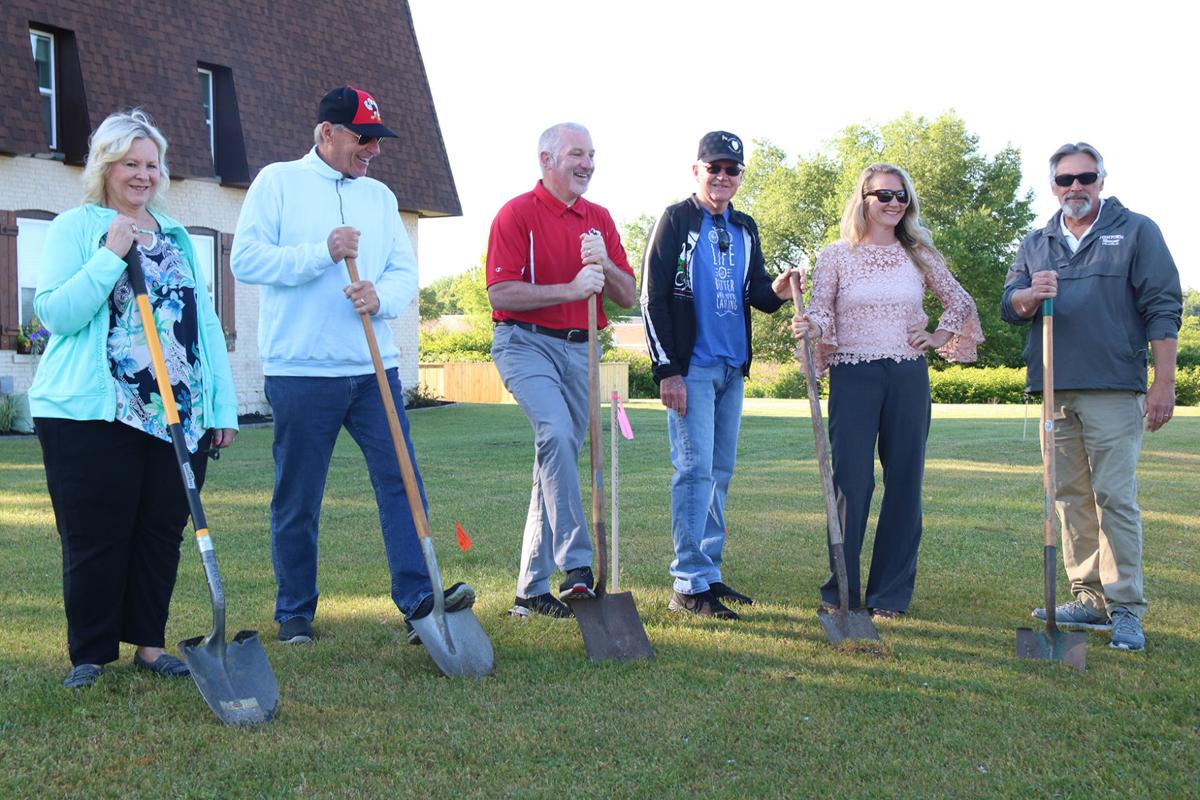 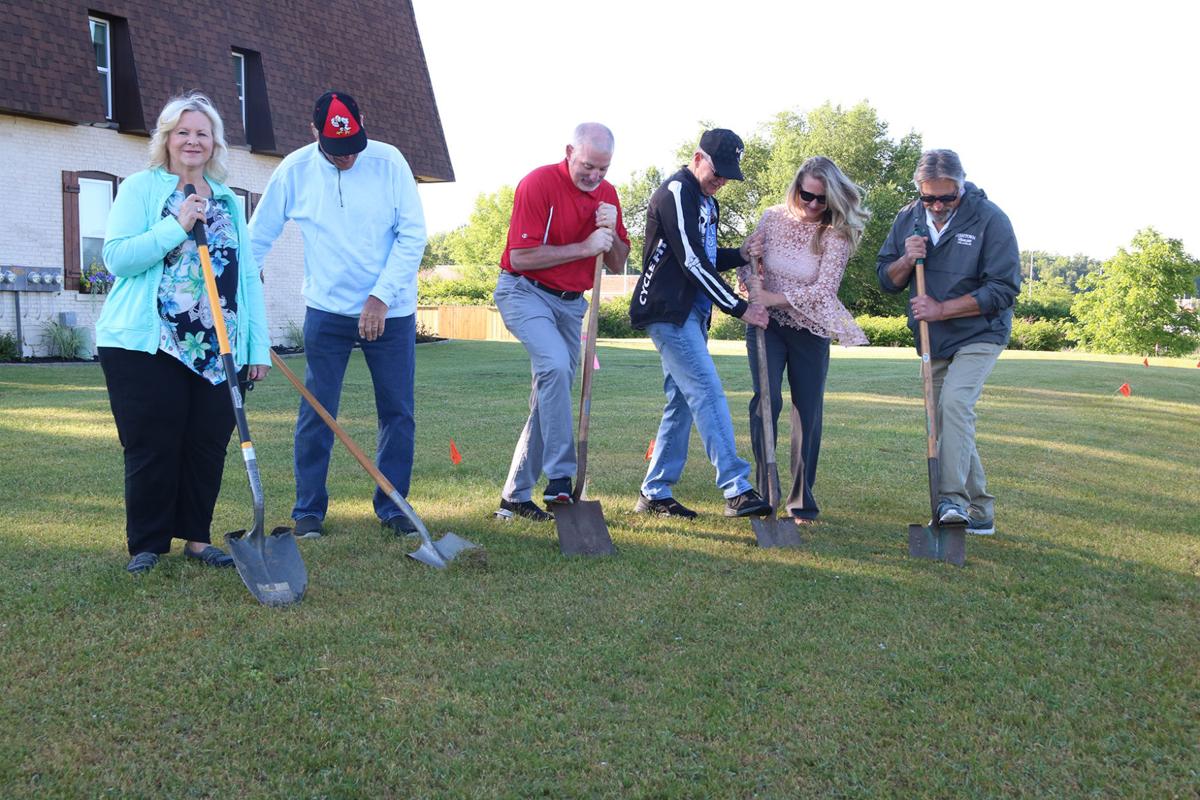 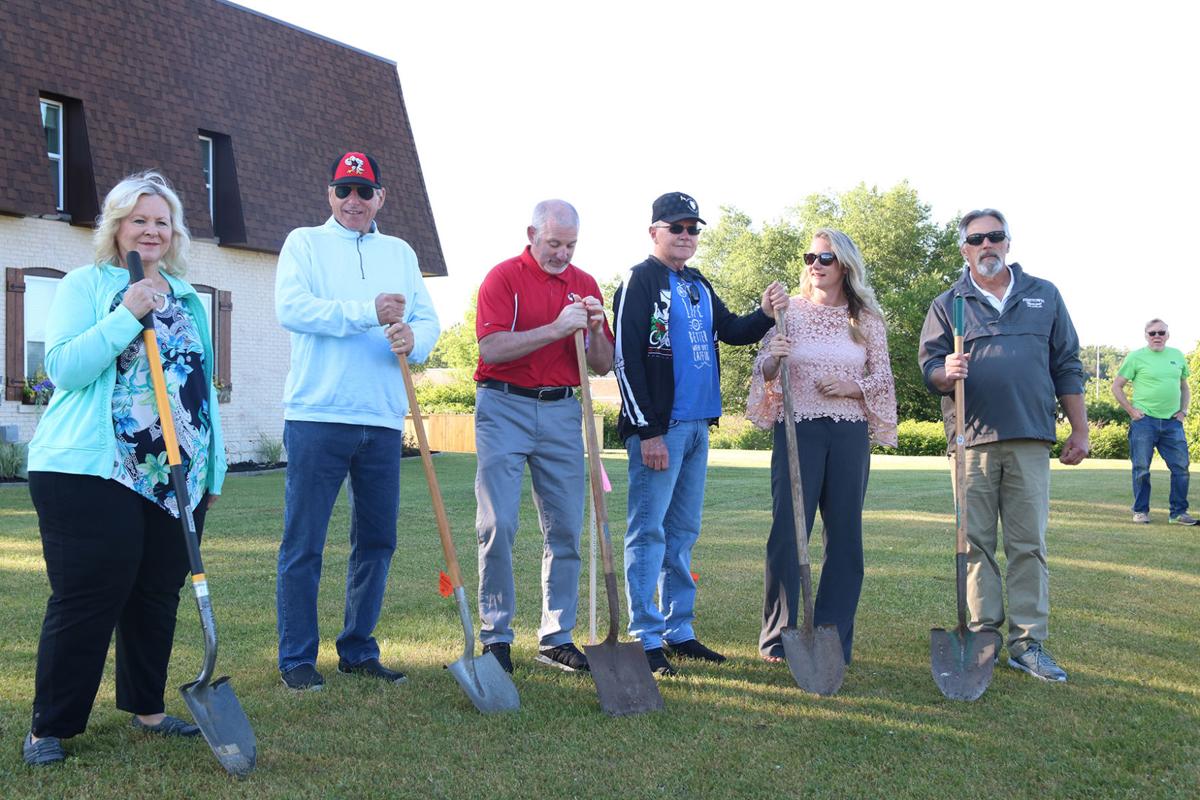 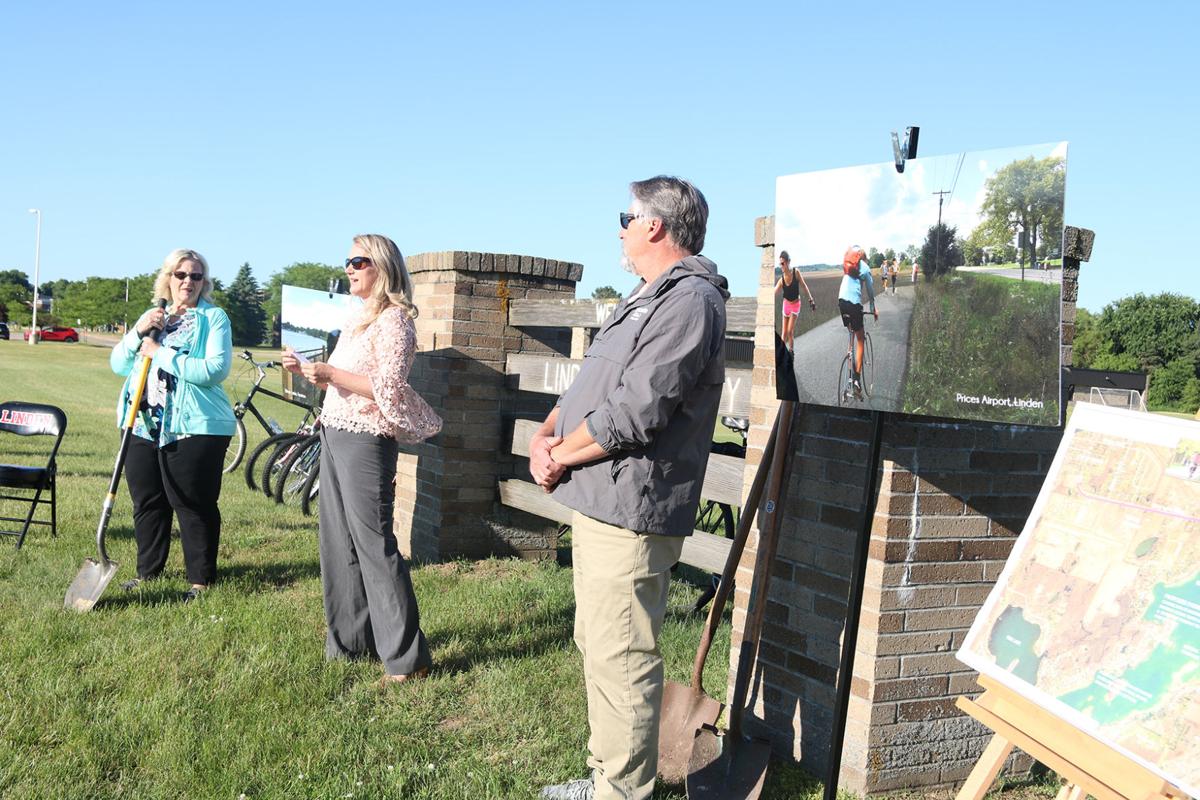 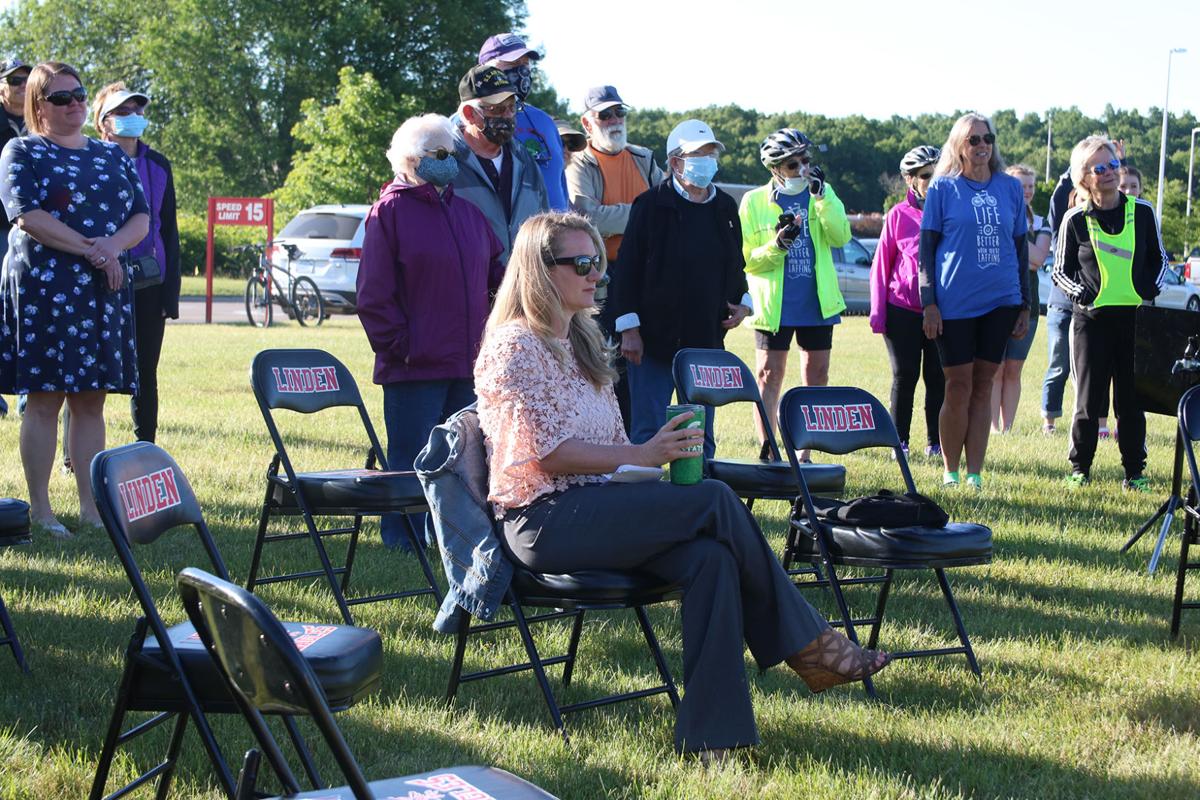 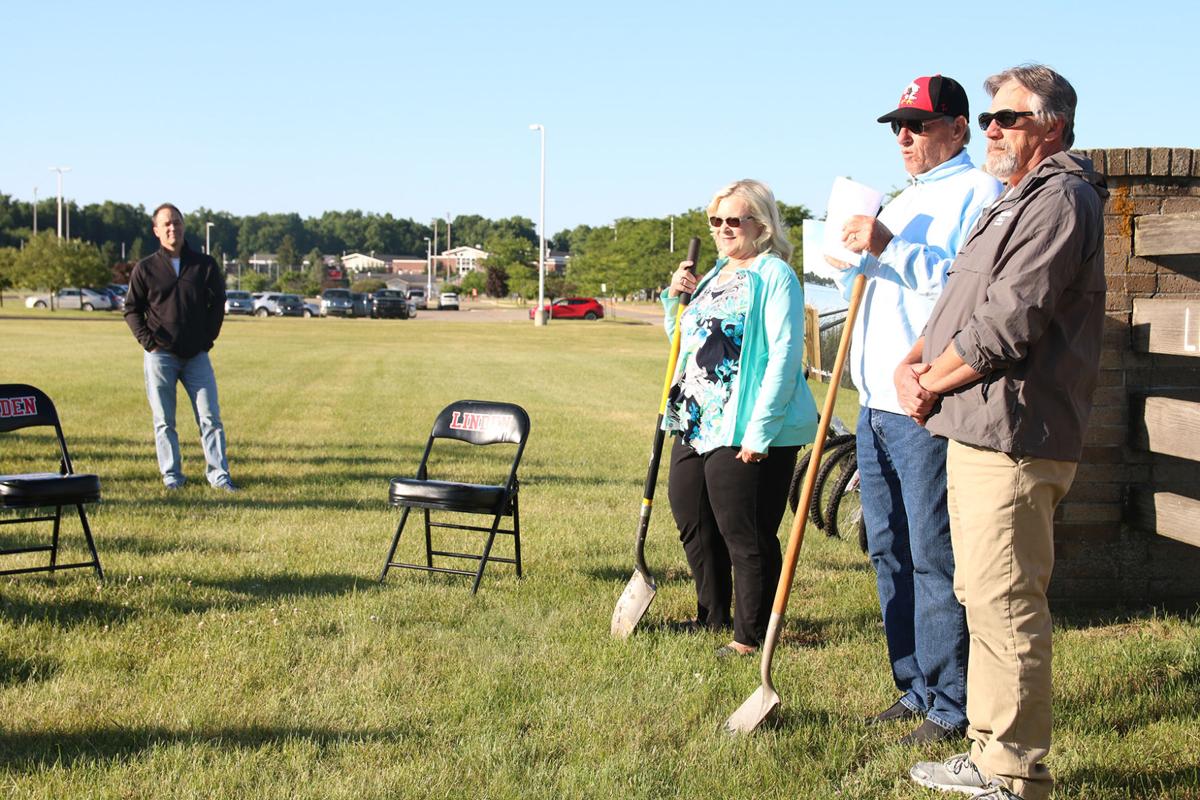 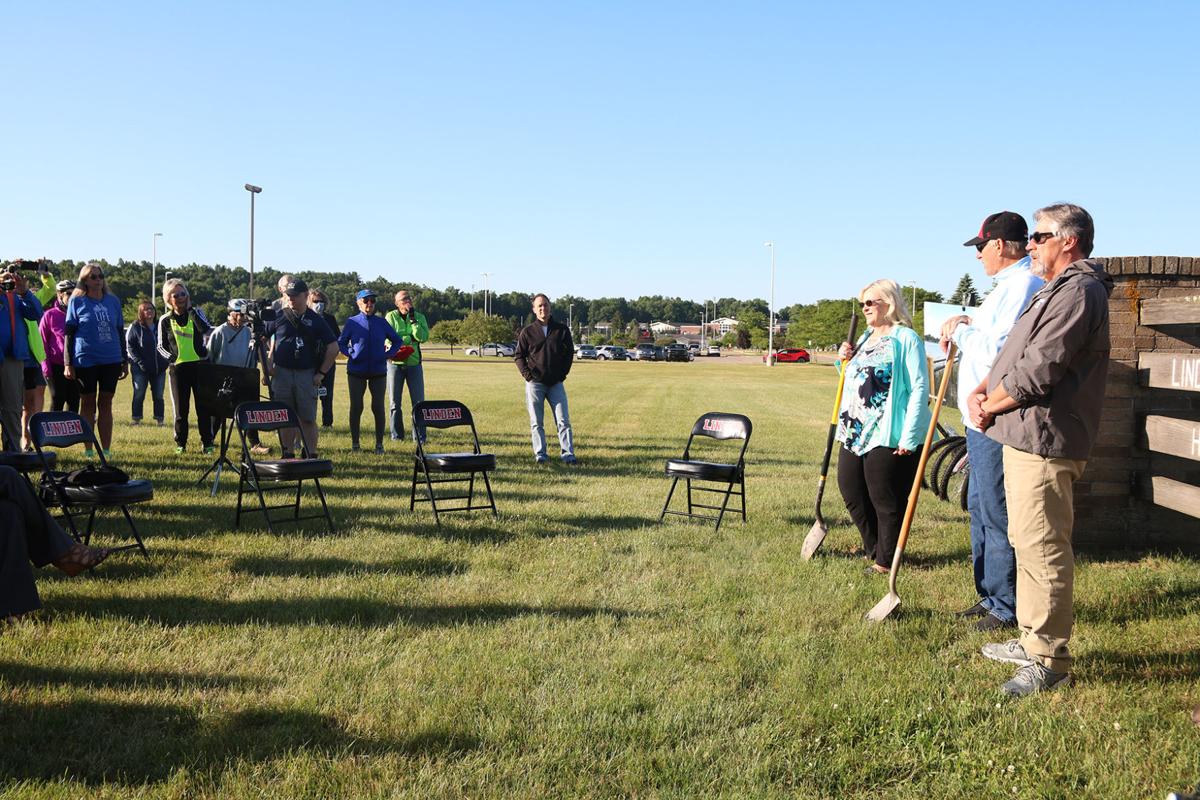 After years of planning, applying for grants and fundraising, organizers used shovels

to mark the groundbreaking ceremony on Monday, June 15 for the pathway in front of Linden schools on Silver Lake Road.

Teresa Ciesielski, the main organizer and fund raiser, said the pathway will be a safe environment to bike, walk, run and participate in other non-motorized recreation.

“This could not be happening at a better time in our lives with coronavirus coming up and people needing some place to go outside and escape their houses. We don’t know what fall is going to bring, but one thing is for sure is that by fall, this pathway is going to be done and people will have that form of recreation,” she said.

The pathway will start at Haviland Beach Drive and Lobdell Road, traverse through the Linden schools campus to Silver Lake Road and then continue east on Silver Lake Road, through Fenton Township and connect into the existing city of Linden’s sidewalk and bike lane.

The trail, which cost about $1.4 million and is anticipated to be completed by this fall, was made possible through federal, state, local and private dollars.

“Vic (Lukasavitz) helped me and mentored me along the way and in many ways he was sometimes my counselor when I thought I was going to have a breakdown,” she said. “I think a lot of thanks has to go to Vic and also Ron Stack for creating this LAFF community.”

Ciesielski gave thanks to the groups that made the pathway possible and continues to work on the next phases of bringing more pathways to the local communities. This includes Linden Community Schools, Superintendent Russ Ciesielski and Ed Koledo, who is the former superintendent and new executive director of Southern Lakes Parks and Recreation. She also thanked Argentine Township, the Michigan Department of Natural Resources for the recreation grant, Safe Routes to Schools, the Hagerman Foundation for the donation, the Fenton Community Foundation for supplying the first grant, the Genesee County Metropolitan Alliance and Jacob Maurer, and the design engineer and construction company.

“This has definitely been a labor of love for me and seeing everyone out here lets me know that it was definitely all worth it because there are so many people who support this project,” she said. “So many people had to step up and say they wanted it for it to happen.”

Argentine Township Treasurer Norm Schmidt addressed the attendees. He said he wanted to thank Ciesielski and that no one works harder than her.

“For well over 40 years now, I’ve watched children coming and going from Linden to the Linden schools campus and thought, oh how great it would be to have separation that would provide a measure of a safe routes to school, and these kids are out here day in and day out walking along the road,” Schmidt said.

That day has now arrived.

“This path will become a major focal point in our community and the schools. The opportunity to recreate safely is measured on the smiles on their faces. You see people out here and using the facilities and they’re all smiling. The path will enhance the welcoming nature of the Linden schools and the opportunities for learning, extracurricular activities and the pleasant, natural, environmental settings, and we thank the Linden school district for being involved,” he said.

Koledo said the Argentine pathway is “blazing the trail” for what’s coming next. SLPR, Linden, Fenton and Fenton Township have been working on plans to bring more pathways to the communities. He mentioned the failed millages that would have taxed residents to build these non-motorized pathways.

“What we learned from that — people want pathways but they don’t want taxes to pay for them,” he said, adding that they’re currently working on raising funds that would be matching money to allow them to apply for more grants.

Superintendent Russ Ciesielski said he’s excited to see more people travel through the community to use the pathway once it’s completed.

“It’s going to be a great opportunity for our community, for Linden, for Argentine, for the school district, really for everybody involved. I think Norm Schmidt really hit the nail on the head during his speech when he said, ‘it’s about the present and the future of our community and our students.’ It’s about getting outdoors, it’s about exercising, it’s about communicating, it’s about relationships. When the pathway is completed, it’ll be great. We don’t have to worry about the road, the cars. It’s going to bring more people out.”