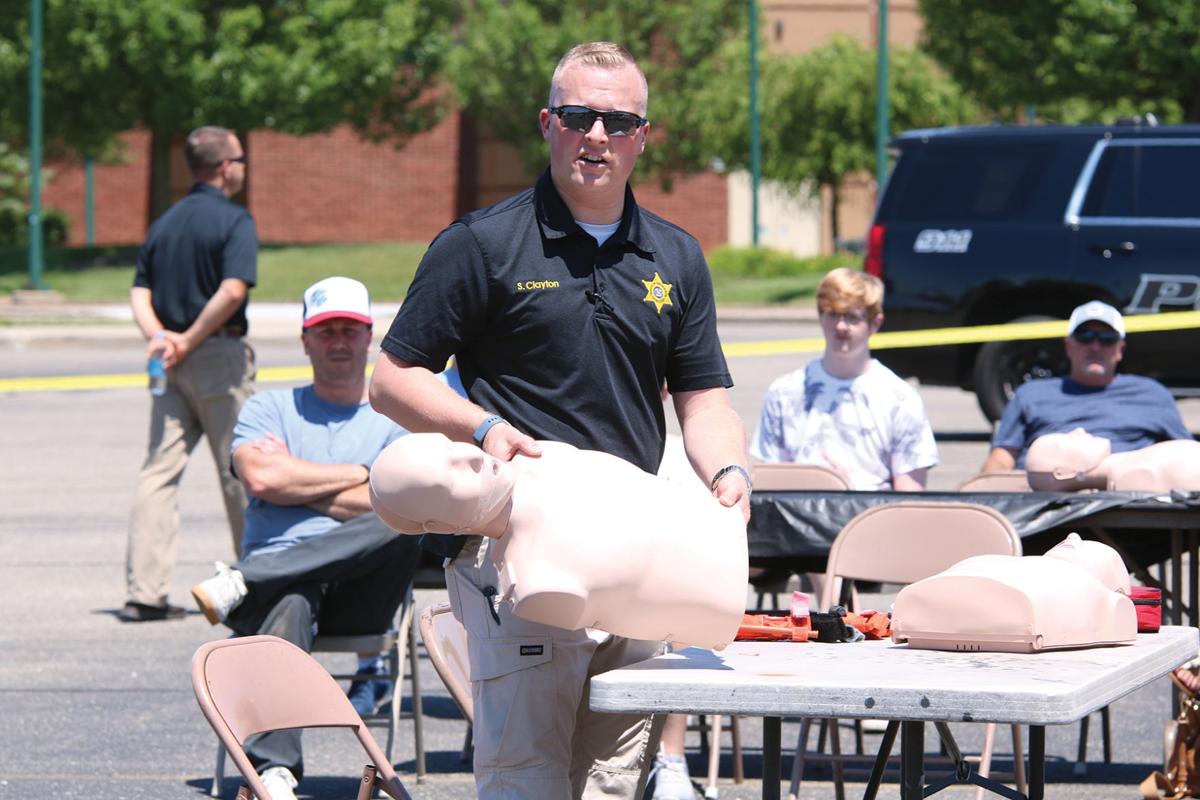 Dep. Sean Clayton from the Genesee County Sheriff’s Office, who’s been a paramedic for 10 years, tells the attendees about proper CPR technique. 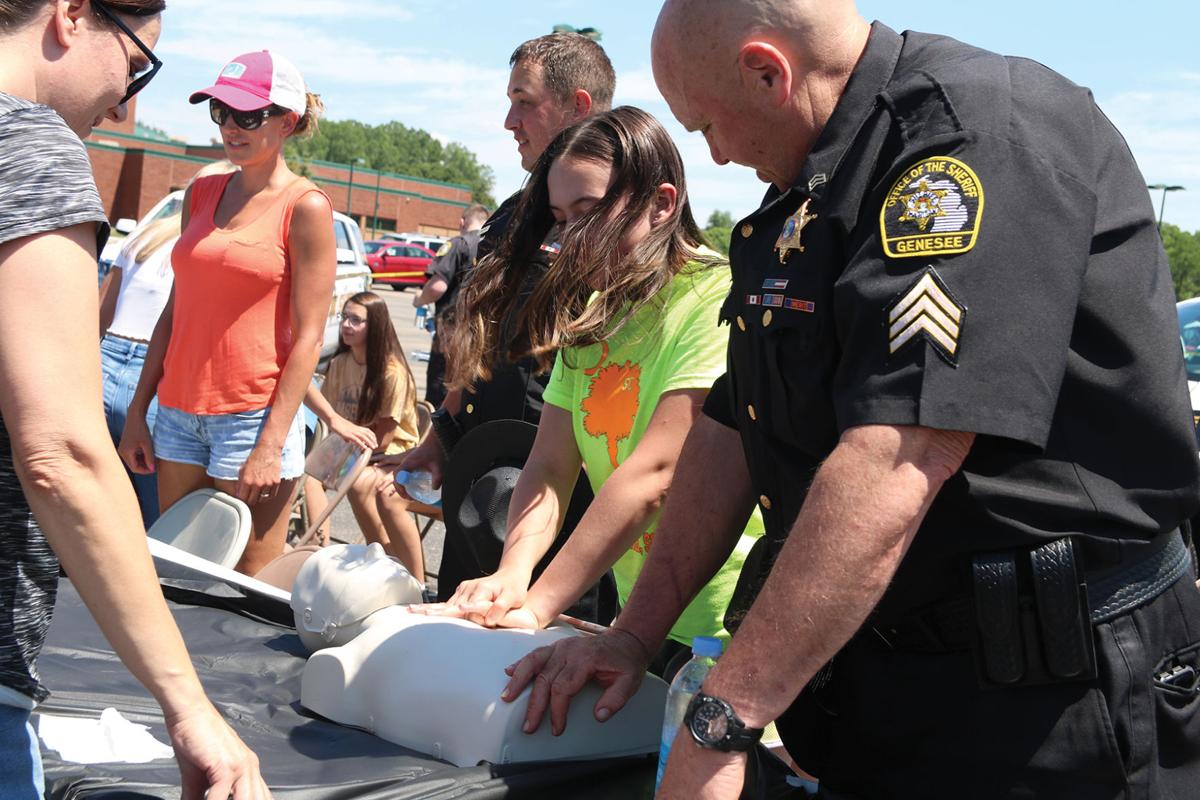 An officer from the Genesee County Sheriff’s Office helps an attendee practice CPR on a dummy on Thursday, June 18 at a free first-aid and boater safety class conducted by the GCSO. Officers covered CPR, using a tourniquet, age requirements to drive a boat, required safety equipment and more. 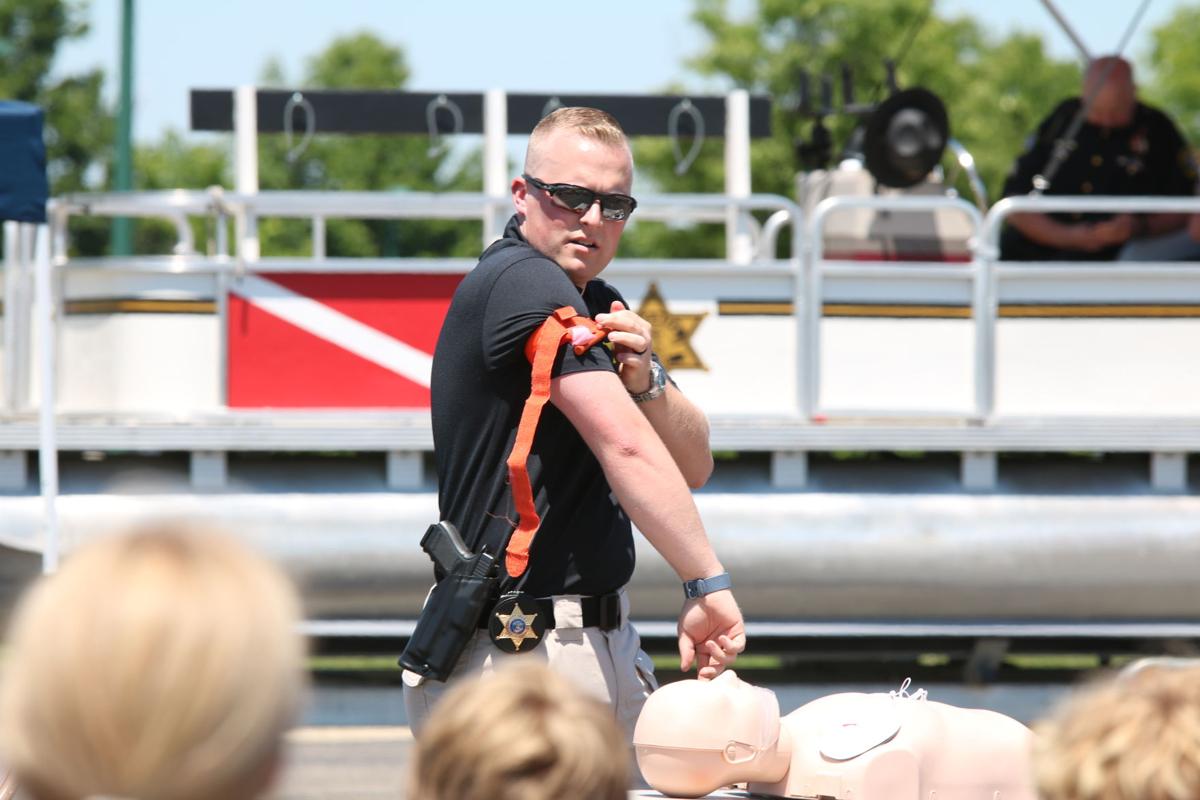 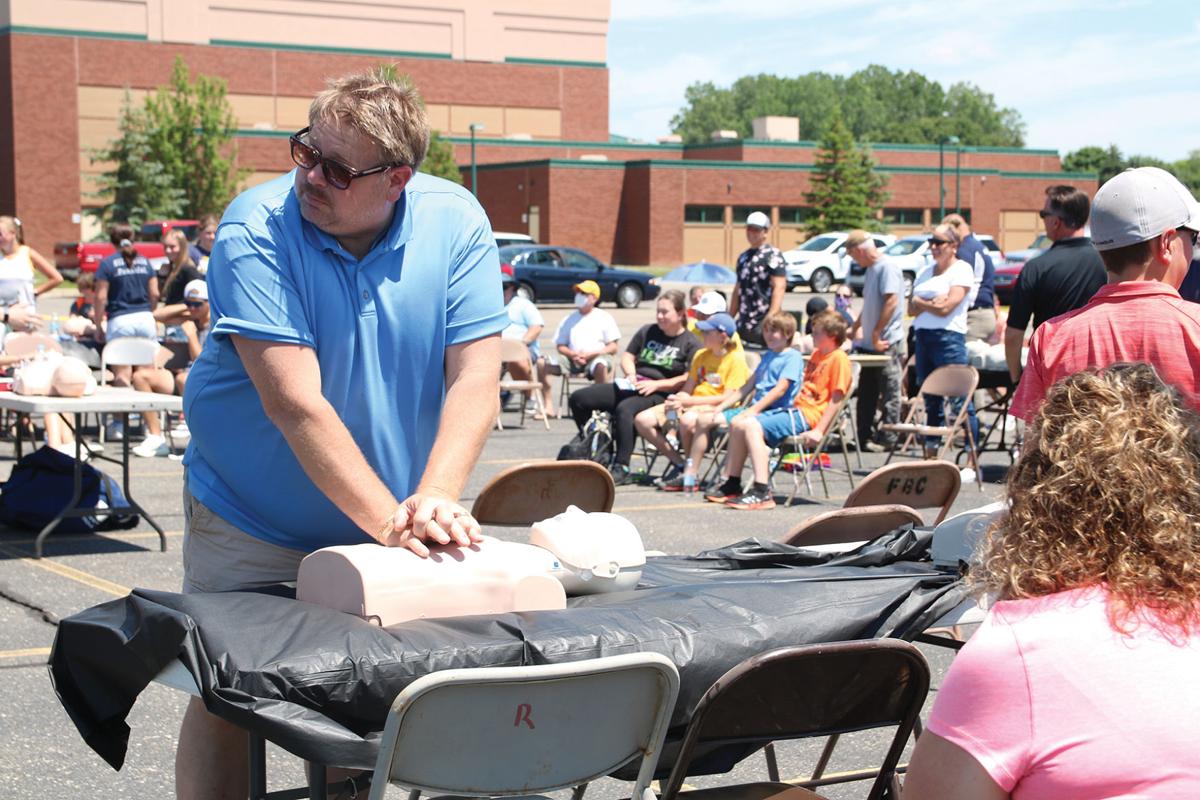 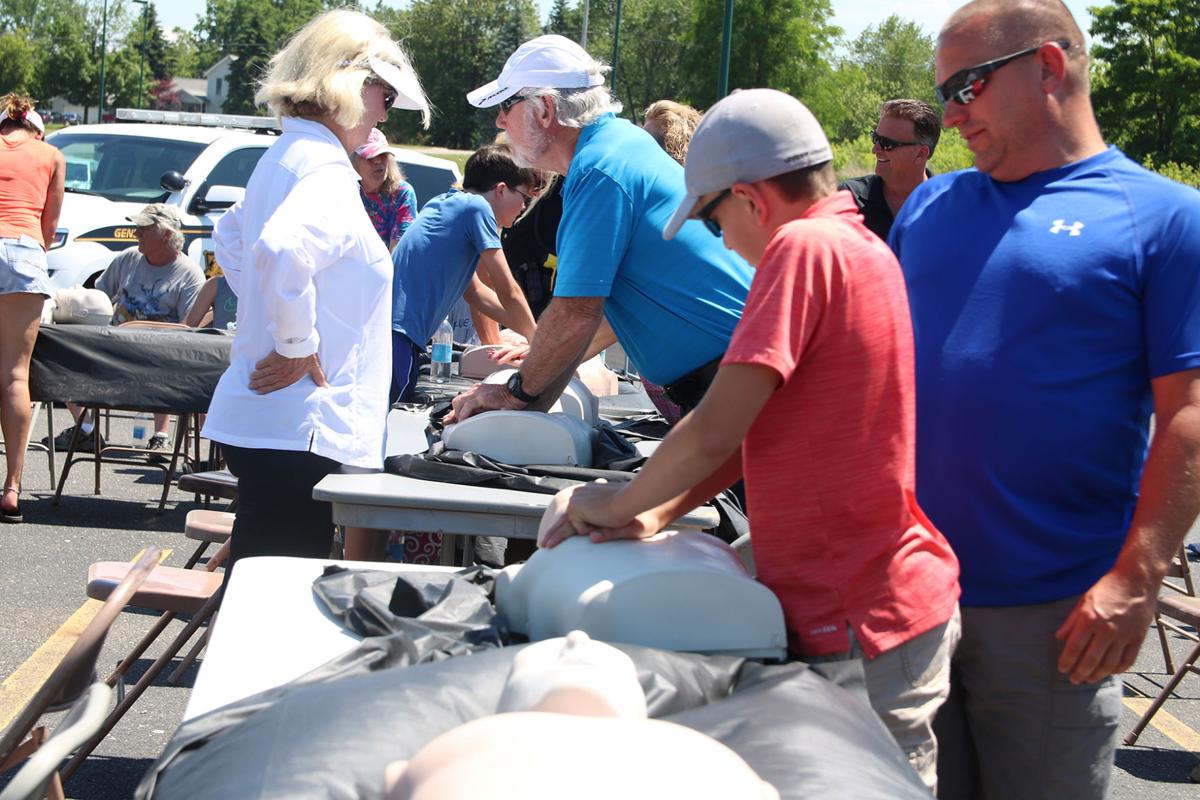 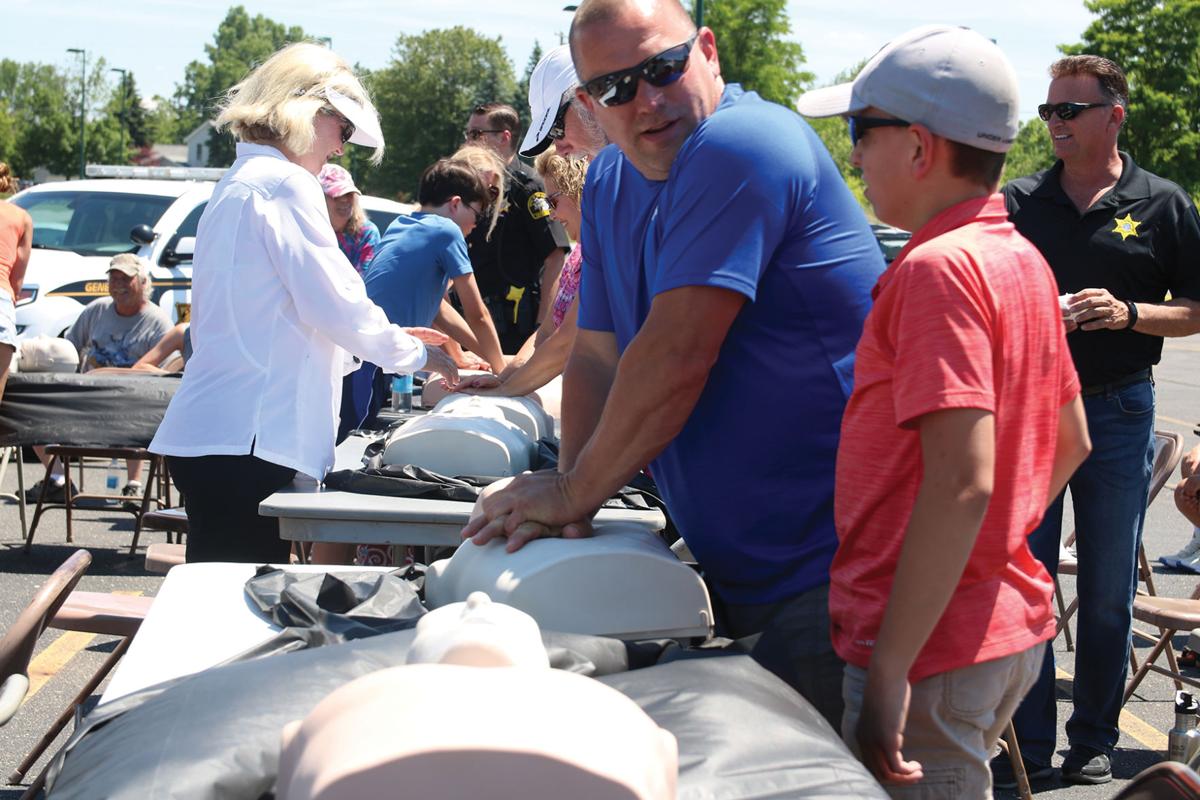 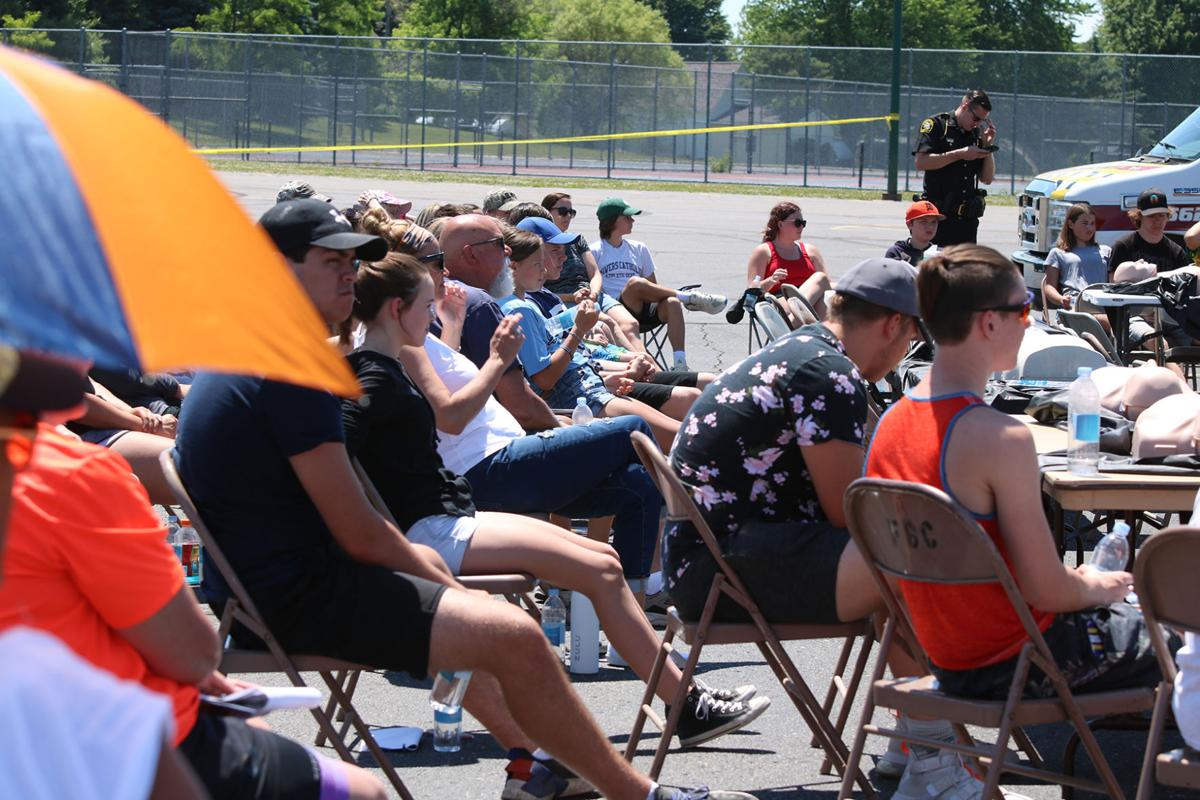 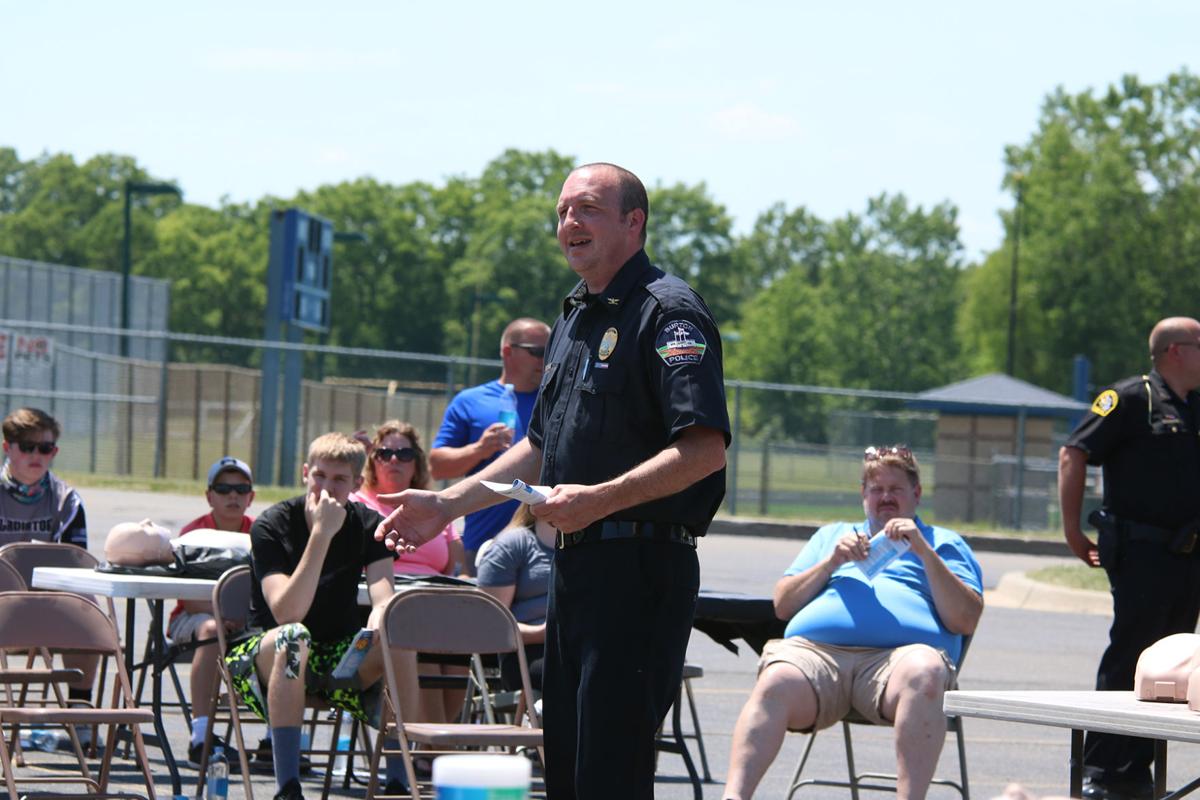 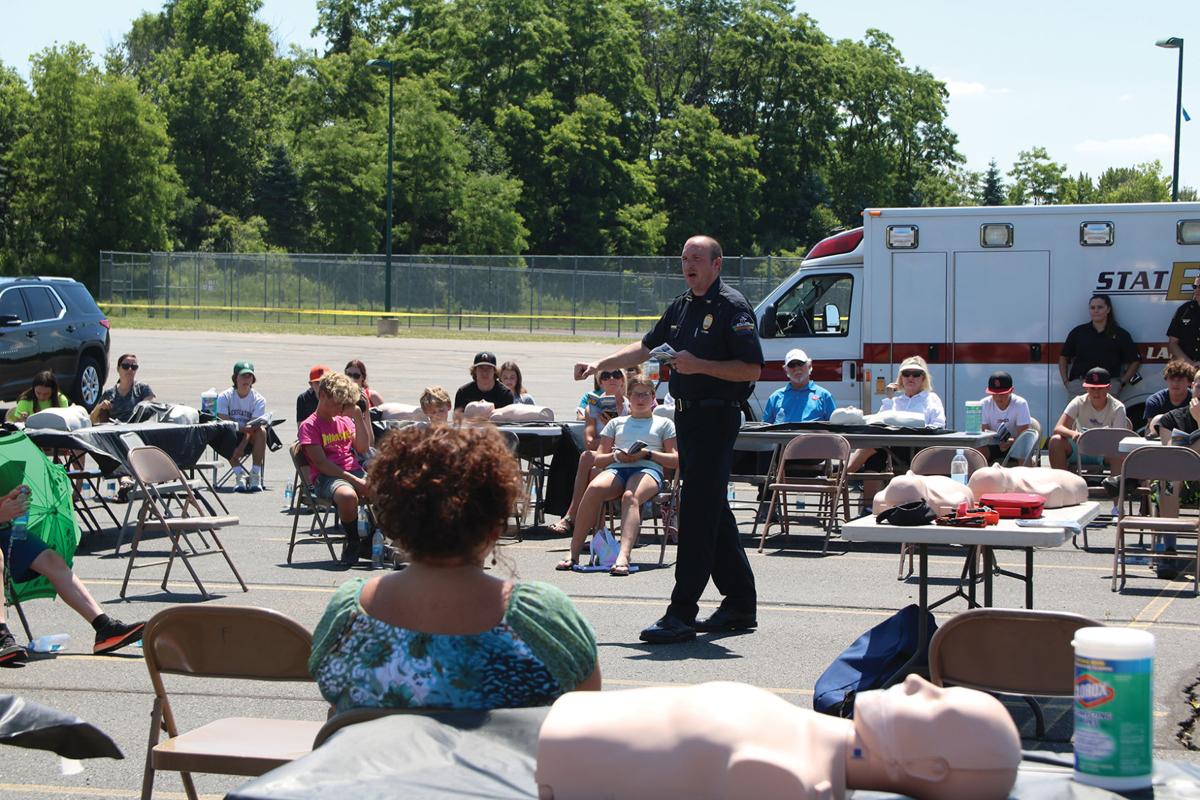 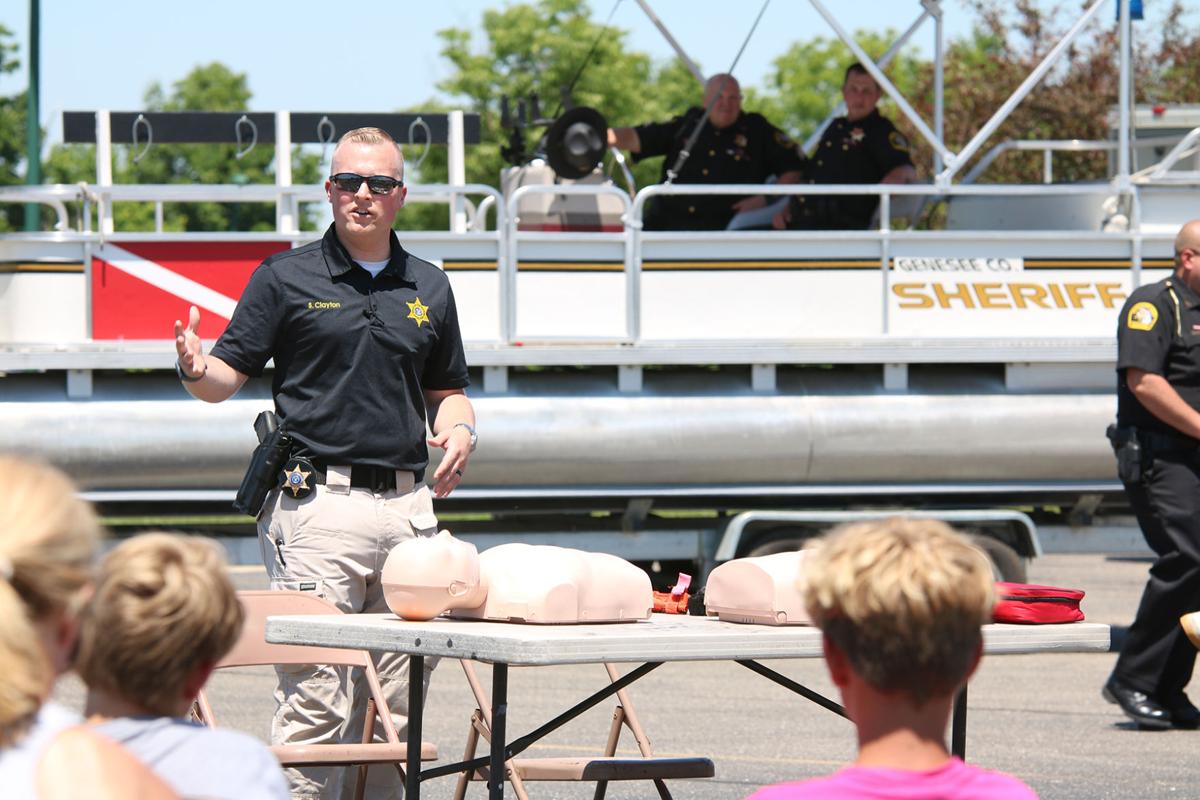 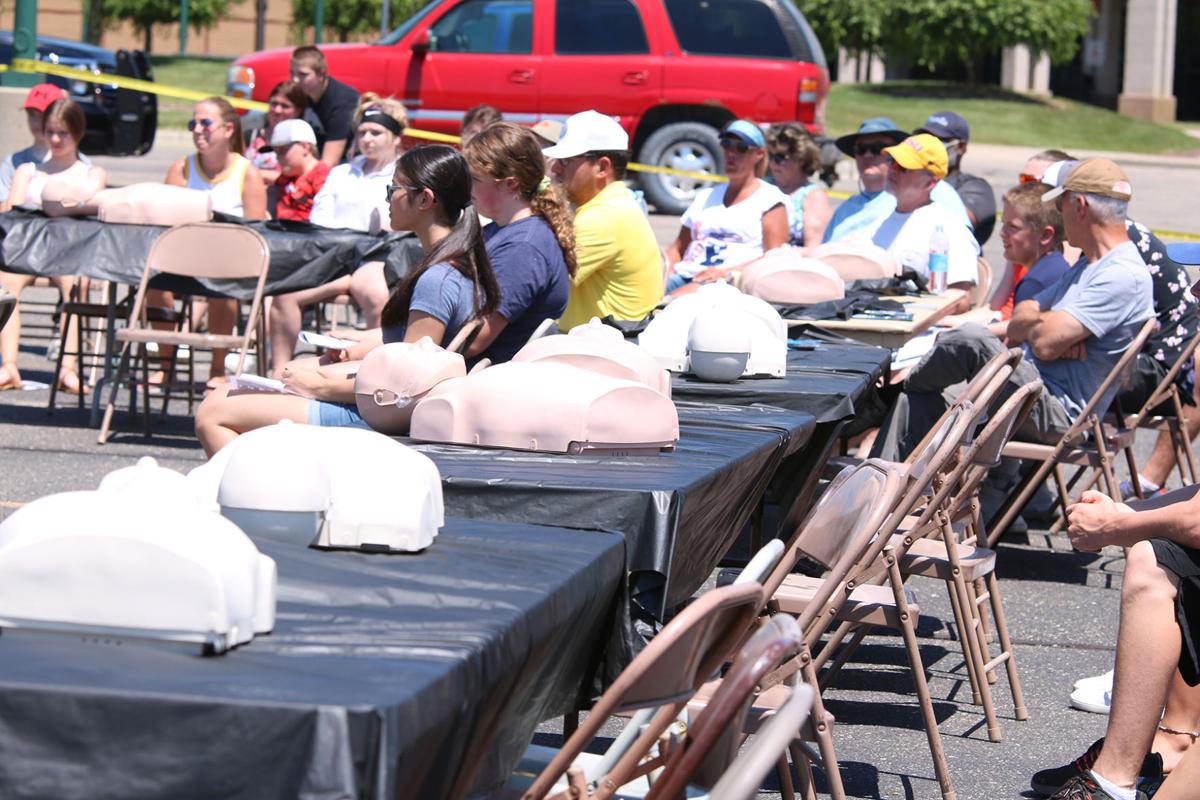 Dep. Sean Clayton from the Genesee County Sheriff’s Office, who’s been a paramedic for 10 years, tells the attendees about proper CPR technique.

An officer from the Genesee County Sheriff’s Office helps an attendee practice CPR on a dummy on Thursday, June 18 at a free first-aid and boater safety class conducted by the GCSO. Officers covered CPR, using a tourniquet, age requirements to drive a boat, required safety equipment and more.

In the wake of two lake accidents which resulted in two deaths, the Genesee County Sheriff’s Office hosted a free boater safety class Thursday, June 18 for anyone wishing to attend.

Sitting around tables with CPR dummies, attendants listened to the two-hour presentation about first-aid and boater safety.

Dep. Sean Clayton, who’s been a paramedic for 10 years, said the first step to take after any accident is to call 911 and know the address. If you’re on the lake, know which road you’re closest to. If someone isn’t breathing, check for responsiveness.

With CPR, doing mouth-to-mouth is no longer recommended. Clayton said the goal is to do 100 chest compressions a minute, which helps keep blood flowing to their brain until paramedics can arrive. Doing them to the tune of the popular song “Baby Shark” will help people do the proper amount.

If someone is unresponsive and not breathing in the vicinity of an automated external defibrillator (AED), then the people helping should grab it and follow the instructions until paramedics arrive.

“You see someone bleeding... someone came into contact with a prop on the back of the boat, they got a big gash on their arm. Someone tell me what the first thing you do is,” he said. “We’re going to stop the bleeding.”

Apply director pressure, call 911 and get first responders out there. Clayton demonstrated how to use a tourniquet, which can be bought online or made from towels, cloth or an article of clothing. The tourniquet should be tied at least 2 inches above the wound.

Attendees practiced CPR on dummies, which were wiped down between each use.

If someone has a seizure, Clayton said to protect their head, don’t put anything in their mouth, and roll them onto their side with their head on their arm. In the event of a narcotic overdose, it’s best to do compressions and call 911.

Burton Police Chief Brian Ross, who worked at the GCSO for 17 years and in the marine division, went over the laws of the water in Michigan.

“If you see these guys out on the lake, they’re not here to ruin your weekend. They’re there to make sure your weekend isn’t ruined,” he said.

Ross covered information about different classifications of boats, nighttime boating, fuel safety and more. Before a boater leaves the dock, they should check to make sure they have identification, a fire extinguisher, and enough U.S. Coast Guard-approved life jackets on board for all passengers. Everyone under the age of 6 must wear a personal flotation device (PFD) when the boat is not anchored. Check to make sure all lights work.

He covered when boaters need to give the right-of-way to other boats and how to identify which light is which. Green lights mean it’s the starboard/right side, and red lights are on the port/left side.

Ross covered what’s considered reckless operation of a vehicle, which is illegal. This includes weaving around boats too closely, jumping wakes too close behind a boat and not leaving adequate room in front of the boat in front of you.

Disturbing wildlife is illegal, as is going too fast in a way that threatens the safety of people or property. People are not allowed to reside in the bow of a vessel without proper seating while the boat is moving. Failing to operate in a counterclockwise distance is illegal. Boating within restricted areas is not allowed.

Dep. Scott Mangrum said if someone falls overboard, mark where they fell in the water. Boats will float away from the spot even when there’s no wind.

For more information on boater safety, go to boat-ed.com.