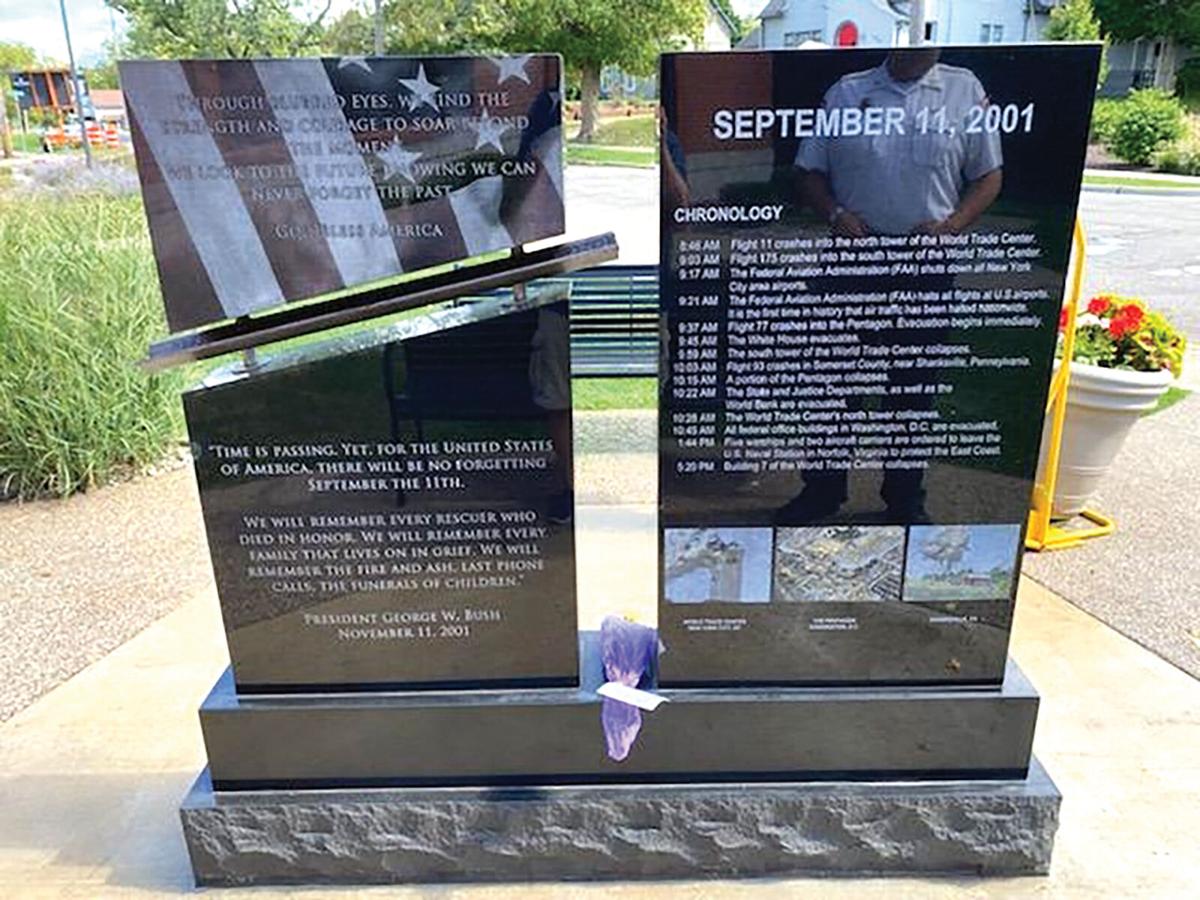 This 9-11 memorial is on display at the Fenton Fire Department. 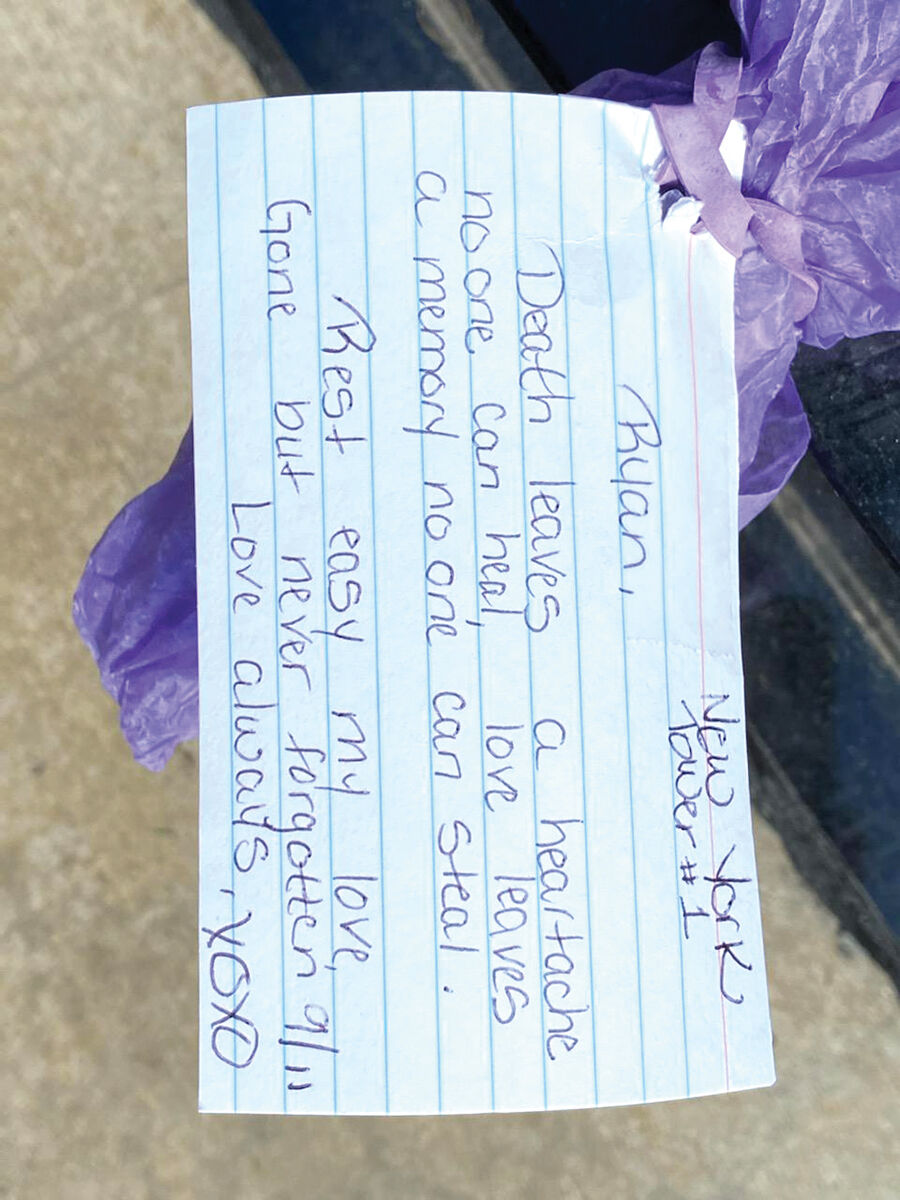 This flower and note were left Sept. 9 at the Fenton Fire Department 9-11 memorial site. Fenton Fire Chief Bob Cairnduff said the pain, suffering, and the memories are not gone, and should not be forgotten. Submitted photo

This 9-11 memorial is on display at the Fenton Fire Department.

This flower and note were left Sept. 9 at the Fenton Fire Department 9-11 memorial site. Fenton Fire Chief Bob Cairnduff said the pain, suffering, and the memories are not gone, and should not be forgotten. Submitted photo

Throughout the past couple weeks, many Americans have been reflecting on the 20 years since the Sept. 11, 2001 terrorist attacks. You likely remember exactly where you were and what you were doing when you heard about the hijacked planes, plane crashes, as well as the collapse of both towers of the World Trade Center in New York City.

While frightened people fled for their lives as the Twin Towers

collapsed and people fled the Pentagon, which also had been struck, our first responders were running toward the unfolding scenes.

Of the 2,977 victims killed in the 9-11 attacks, 412 were emergency workers in New York City who responded to the World Trade Center. This included 343 firefighters, including a chaplain and two paramedics of the New York City Fire Department.

The Times reached out to our local fire chiefs to see what they remember of that historical day and what it still means to them.

Fenton Fire Chief Bob Cairnduff wasn’t working full time at the fire department at the time. He said he was in a business meeting at the time and one of the workers busted into the meeting with the information.

“We wheeled a TV on a cart into the meeting room and we all watched for a long while,” he said. “We decided to send everyone home for the day. I remember getting home and checking on the family. That night, I remember sitting by myself and watching the TV until early in the morning of Sept. 12.

“To this day, 9/11 stirs a lot of emotions for me. Every year I think about all the lives that were changed forever that day. The people in the buildings, the people on the planes, and all of the responders. There were so many others that were affected. The responders and all of the contractors that worked at ground zero for months. They are still dealing with the ramifications of the toxins they were exposed to at the site.”

Cairnduff added that he wishes everyone could remember the feelings and emotions that the country had in the days and months after 9/11.

“The country was different. People were nice to each other, respectful. They appreciated what they had and appreciated those that served to keep it safe.”

Cairnduff said to this day, people leave notes, flowers and other remembrances at the 9-11 memorial at the Fenton Fire Department.

“We had a bad crash on southbound U.S. 23 and were returning to the station. Over the radio station I was listening to came the report of a plane hitting the World Trade Center in New York. I remember Chief (John) Moulton turning on the TV in the training room just as the second plane hit.

“We all sat there in disbelief after what we had just witnessed. Then the report came out that we were under attack.

“It’s hard to believe it’s been 20 years. All of those lives lost that day and the ones we are still losing to cancer, suicide and other issues caused by this horrific attack on our county.

“All I ask is to ‘Never Forget.’ Many public safety and armed service personnel gave their lives to help protect us and are still doing the same thing today. I would like to thank them all for the service they provide to keep us safe.”

Argentine Township Fire Chief Jeremy Kurtz was at work when a friend of his called to tell him to turn on the TV. “I was watching the news when the second plane hit the tower. I couldn’t believe what I had just witnessed, I was shocked.

“As the days went on and more information came about, I found out that one our own firefighter’s father was on FDNY and had perished in the rescue attempts when the towers collapsed. Several of our firefighters went to New York to assist in the recovery mission for a few weeks.

“It is definitely a tragedy I will never forget. I have been to the 9-11 Memorial and was saddened to see everything that was there, the faces of lives lost, but intrigued by the experience of being there. 9-11 is in the hearts of every first responder and will always be remembered.

“Through the years, our department has paid tribute to those who lost their lives and to the first responders who survived that horrible day. I consider 9-11 as a remembrance day versus an anniversary. It’s a reminder that this type of career can be very dangerous but necessary to serve our communities. Prayers and thanks go out to the fallen, their families, and to all the first responders who do their best everyday to protect and serve our communities.”