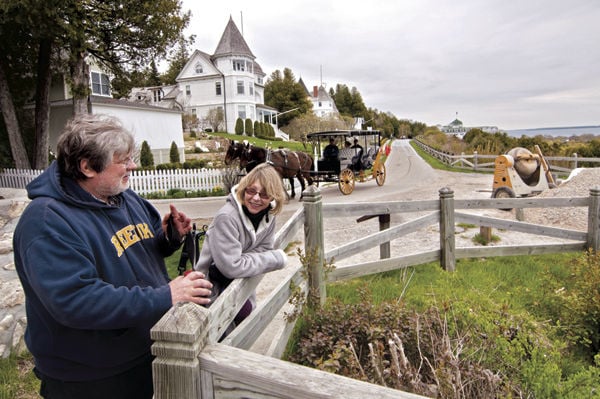 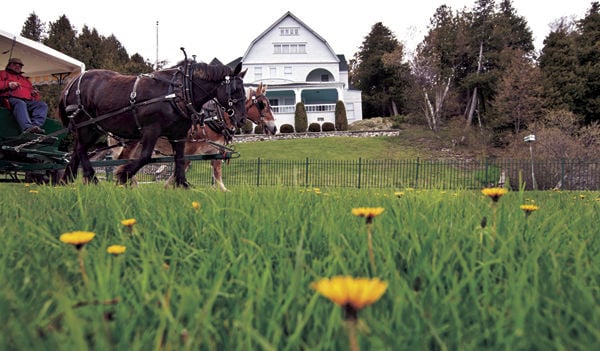 Mackinac Island is one of Michigan’s most popular tourist destinations for people who love history, bicycles, fudge and . . . ghosts.

With its rich and colorful history, this famous isle is a prime candidate for hauntings, especially as it is basically a huge Native American burial ground, where a military fort was built and a lot of people were killed.

Fort Mackinac is said to be haunted in many spots. “Cold spots” and orbs show up in photos in the Guard House. In the Hospital, many visitors have said they detect feelings of sadness and apparitions of phantom limbs. In the Officer Hills Apartment Quarters, it has been said that people hear the sound of crying babies, moving furniture and motion detectors that go off when no one is inside. At the Officer’s Stone Quarters, ghostly children are said to play with the toys, and then leave them strewn about in the morning.

Staff have reported seeing a man in a top hat playing piano at the bar. Others see a woman in Victorian-era clothing roaming the halls, even getting into beds.

Mission Point Resort was home to The Moral Re-Alignment, a religious movement from the 1930s. The resort was built in the 1950s.

The resort’s popular ghost story is about a man named Harvey, who died in the late 1960s. Supposedly, Harvey was dealing with a broken heart and shot himself behind the resort — not being discovered until six months later. Some people believe there’s more to the story, that he was perhaps murdered.

Harvey is often reported in the resort’s theatre, where visitors have reported being pinched or poked.

One woman claimed that while she was visiting a hotel on the island, she experienced some paranormal activity. She was alone in the hotel room, when the bathroom door closed and the lights turned off. She never returned to the room alone.

These and many other ghost stories are reported in the bestselling book series, “Haunts of Mackinac.”

A downtown haunted tour, The Haunted History Tours, is based on this series and runs from June through July 31.

This 90-minute tour takes visitors through the historic streets of downtown Mackinac, tantalizing them with tales of ghosts, legends and the darker side of the island’s history.

The tour begins at their downtown ticket office at 7416 Main St., in the atrium of the Bicycle Street Inn. Ticket price is $18 and no guests under age 15 are allowed on the tour without adult supervision, 18 and older.

If you’re not staying on Mackinac Island overnight, the tour company advises people not to go on a tour if the last ferry departs less than two hours after the tour begins.