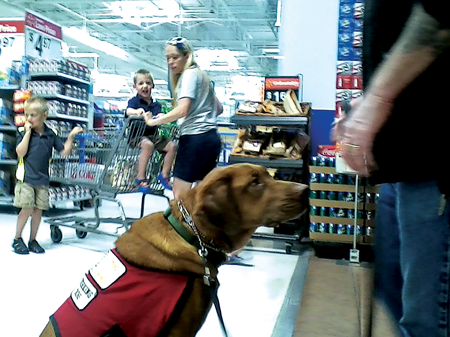 Tiny must maintain focus in a busy area. He works as an assistant for a 13-year-old with autism and is getting a “tune-up” from Grigg. 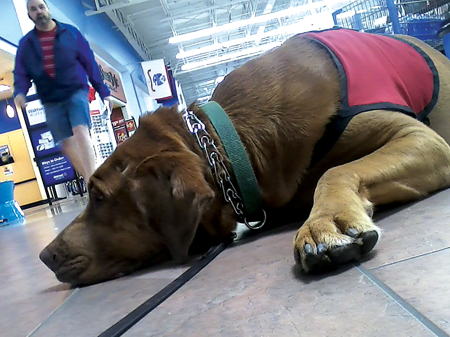 Tiny must maintain focus in a busy area. He works as an assistant for a 13-year-old with autism and is getting a “tune-up” from Grigg.

Tyrone Twp. — For many people, their basement is where old unused belongings gather dust over the years. For Jack and Lori Grigg, their basement serves as a training course to teach assistance dogs many skills — from sniffing out bed bugs to fetching phones and beyond.

All it takes is patience, persistence, and a lot of love for animals.

Hearing dogs, facility dogs, therapy dogs, and assistance dogs are all trained by the Griggs, who own Paradise Dog Training in Tyrone Township.

“We train dogs for pretty much any disability other than being visually impaired,” Jack said.

Together, the Griggs have been teaching obedience classes ever since they met in 1989. In the early 2000s, they started Paradise Dog Training on the side. When they were both laid off from their jobs in 2009, focusing on their business just seemed to be the natural thing to do.

Watching them as they work with the dogs — it’s difficult to imagine a more perfect fit.

“A lot of it is reading the dog. If you can’t read the dog, it’s not going to work,” Jack said.

Only a handful of dogs are trained at a time, which the Griggs find from a variety of contacts. When they first receive a new dog, the animal’s temperament is important in figuring out what type of work the dog will be trained to do.

The Griggs train therapy animals for hospitals. St. John Providence Health System owns seven of their dogs. The Henry Ford Hospitals has one, and is getting its second one this month. The dogs help to reduce staff stress, ease anxiety, and help motivate patients.

“The dog walks around with volunteers and visits people. You want a real calm, laid back friendly dog,” Lori said. Before becoming a therapy animal, the dogs must pass a Canine Good Citizen program and are tested by a third party.

“When they see the therapy dogs, people’s faces brighten up and they start telling us about their dog,” Lori said.

Half of the time the dog is in the hospital it is spent with the staff, the other time is spent with patients. Then the dog gets to lay down in the lobby and people are able to come up to pet it.

Jack said the response they receive from people at the hospital is phenomenal. Henry, a 3-year-old black lab trained by the Griggs, brightens the lives of more than 500 people every day. “It worked out far better than we ever imagined it would.”

The number of things the diabetic response dogs can do is impressive. Through the use of their amazing sense of smell, they can detect when their owner’s blood sugar starts to drop before their owners. Each diabetic dog must be trained to match the unique scent of their owner — but the training doesn’t stop there.

Similarly, the Griggs utilize the incredible sense of smell possessed by dogs to detect bed bugs. Once the process for detecting bed bugs is trained in the dog, they said it is easy to switch out the scent for another.

It’s not always about the nose either — the Griggss train hearing dogs that will listen for sounds, and bring a particular object to a person when a sound goes off. Tell them to “Go get help,” and the dog will bolt away in search of the nearest person.

With a few years of working with dogs full time, the Griggs said that they don’t feel like anything will be changing. “At first we were thinking it was going to be a temporary thing until I found another job,” said Jack, who was a project representative for a civil engineering company. “I am much happier doing this.”