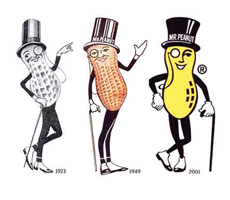 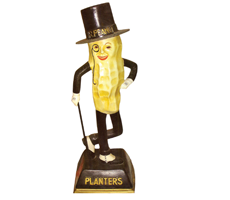 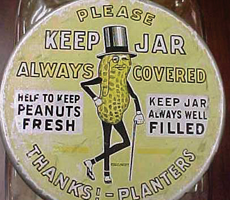 Planters is synonymous with peanuts, and Mr. Peanut is the company’s icon. Just look at any Planters product and the salty character will peer back at you.

He was the country’s first advertising icon and ranks in the top 10 of sought-after collectibles.

There is no other like him — a nutty image dressed formally with a top hat, white gloves and spats, which looks through a monocle and uses a cane. This sophisticated peanut symbol is a favorite of many, recognized readily by adults, teens and youngsters.

The advertising logo and mascot of Planters, an American snack-food company and division of Kraft Foods, has been seen more recently in commercials as computer-animated in a real-world setting.

In a nutshell, Amedeo Obici, an Italian-American businessperson, founded the Planters Peanut Company in 1906.

After coming to the U.S. from Italy in 1889, he began street vending nickel bags of peanuts in Wilkes-Barre, Pa. His brother-in-law, Mario Peruzzi, became his partner in 1897.

Obici came up with a new method of skinning and blanching peanuts so that they came out clean after roasting. In 1913, he built a new processing plant in Suffolk, Va., in the heart of peanut-farming country.

The company wanted to publicize its salted Virginia peanut products and needed a trademark image.

In 1916, a contest took place, and Mr. Peanut was born. Antonio Gentile, a Suffolk High School student, won $5 for his crude peanut man with crossed arms and legs. A professional artist added the top hat, spats and monocle.

Mr. Peanut kept the cane, but as the years passed, the monocle has appeared on both the right and left eye.

You say, why the monocle?

So he can zero in on fresh-tasting nuts. After all, he can’t wear glasses, as he has no ears.

It was in 1927 that Planters started a new advertising campaign called “Nickel Lunch,” with small bags of peanuts selling for 5 cents, each. The protein available in peanuts was emphasized for health reasons.

During World War II, Mr. Peanut was used to help promote the sale of U.S. Savings Stamps. To the delight of children, he traveled the country in a Planters “Nut Mobile.”

When Americans flipped on their TVs in the ‘50s, they saw Mr. Peanut starring in the first of hundreds of commercials. In 1964-65, he was a “star” attraction at the New York World’s Fair.

The first Mr. Peanut billboard was displayed in Times Square in New York during 1942, and 57 years later, the dapper character made returned there.

Three years ago, Mr. Peanut ranked third among the Top 6 in a Favorite Ad Icons and Slogans Competition sponsored by the American Association of Advertising Agencies.

Large Mr. Peanut figures from the ‘30s through the ‘40s were used as eye-catching displays in store windows. These are now a rarity. Today, one in good condition can bring $4,000, or more.

A new collector of Mr. Peanut memorabilia might want to start with jars, which are plentiful and display well. Items made in the ‘70s will range from $20 to $50.

You might say — collectors are nuts about Mr. Peanut.