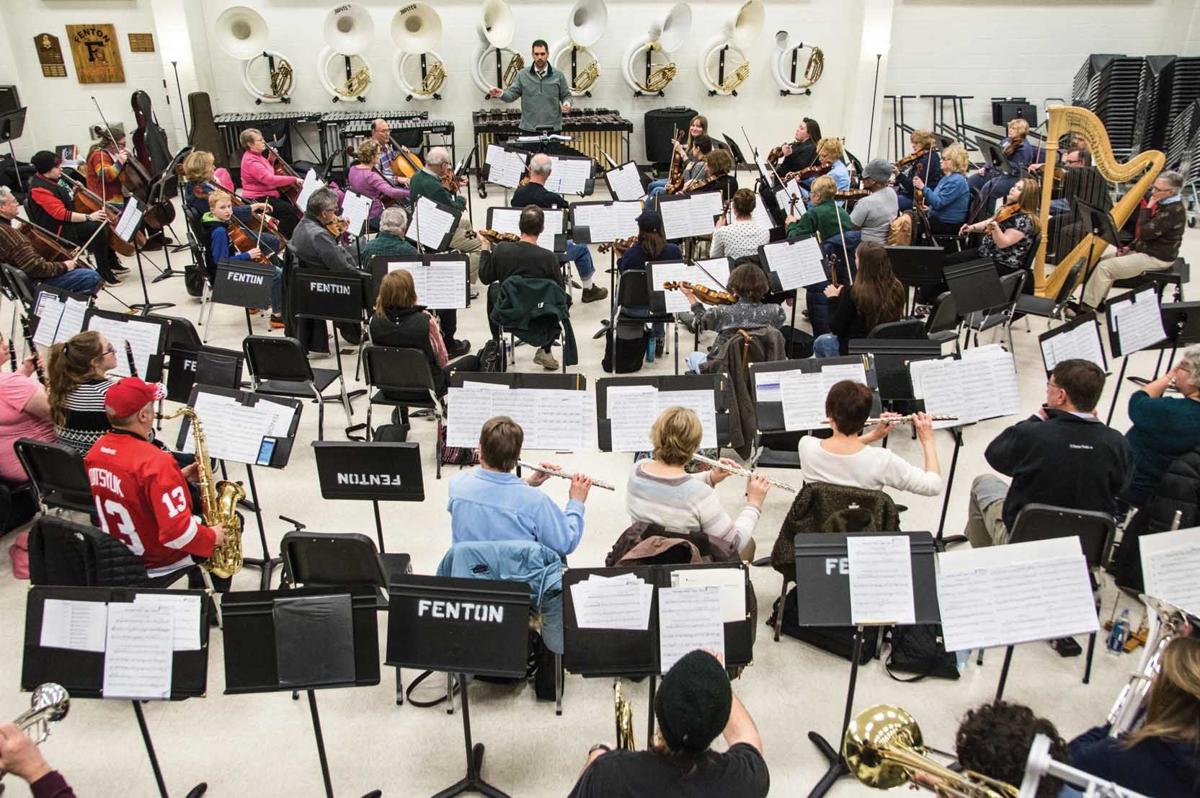 Andy Perkins conducts the Fenton Community Orchestra during rehearsal Thursday night at Fenton High School. The group is preparing for a spring concert, and also a performance of all new material Perkins composed, inspired by the classic film, “The Birds.” 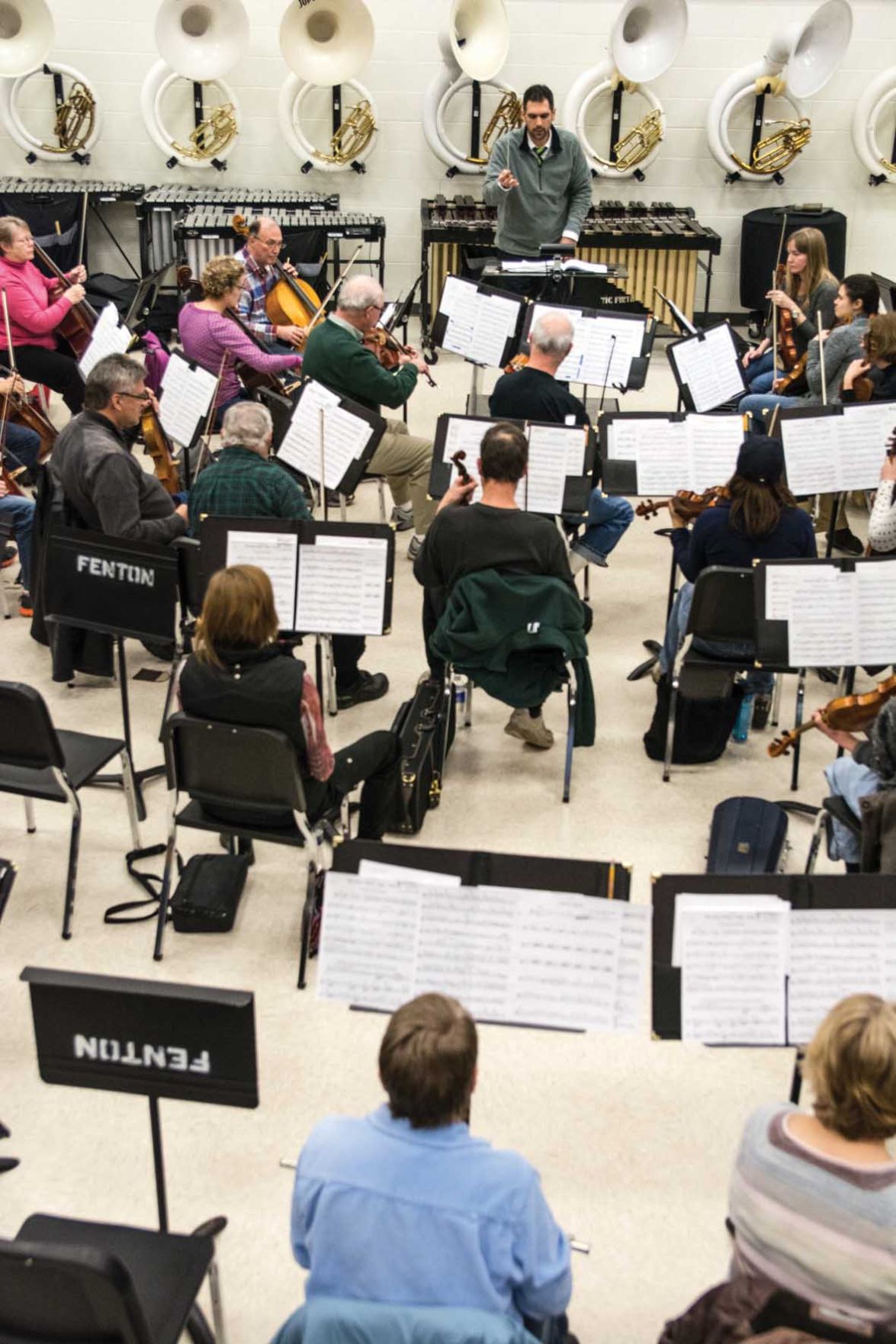 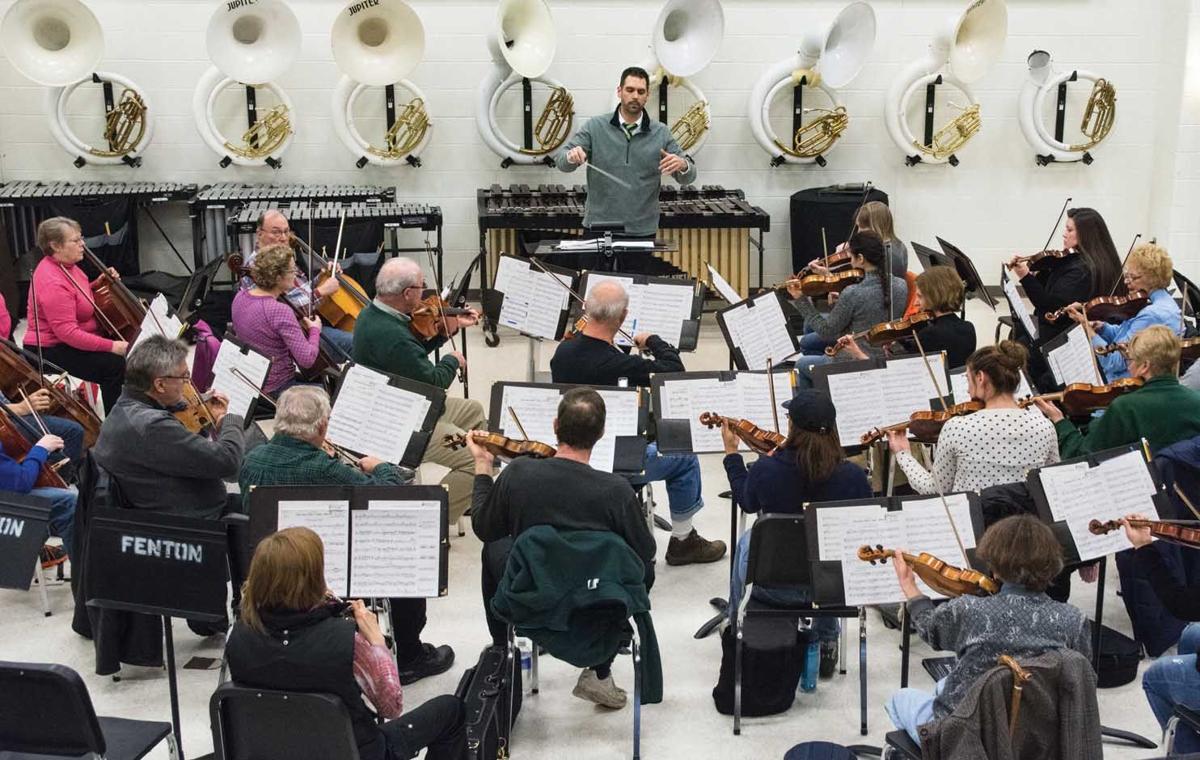 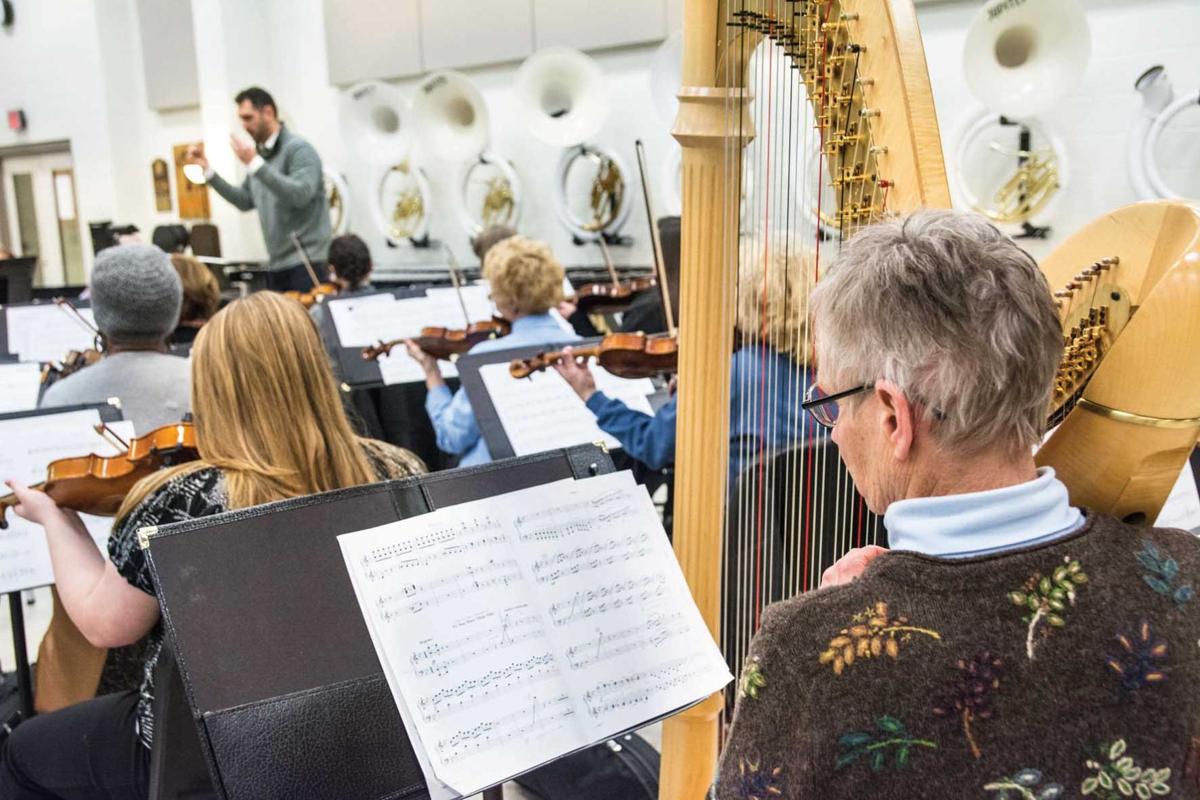 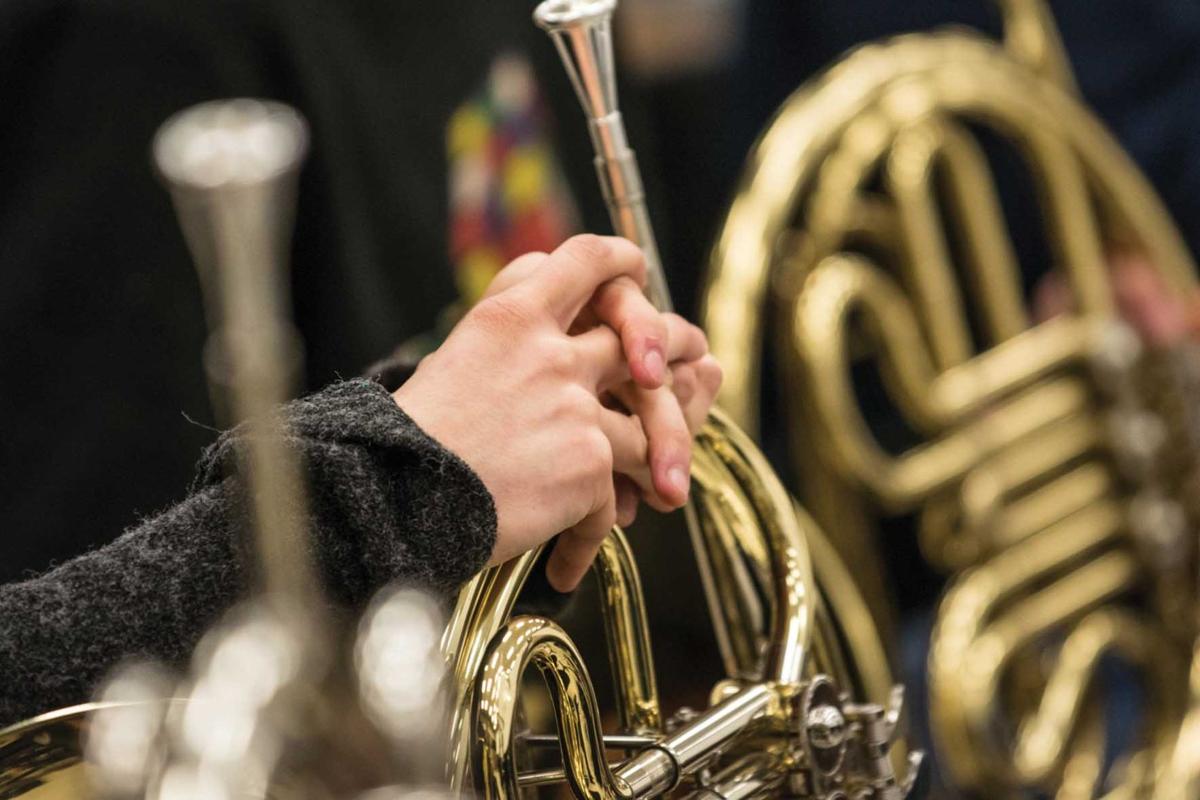 The Fenton Community Orchestra will perform an original score for the classic thriller “The Birds,” on Saturday, Feb. 27. The original movie did not feature a musical score. 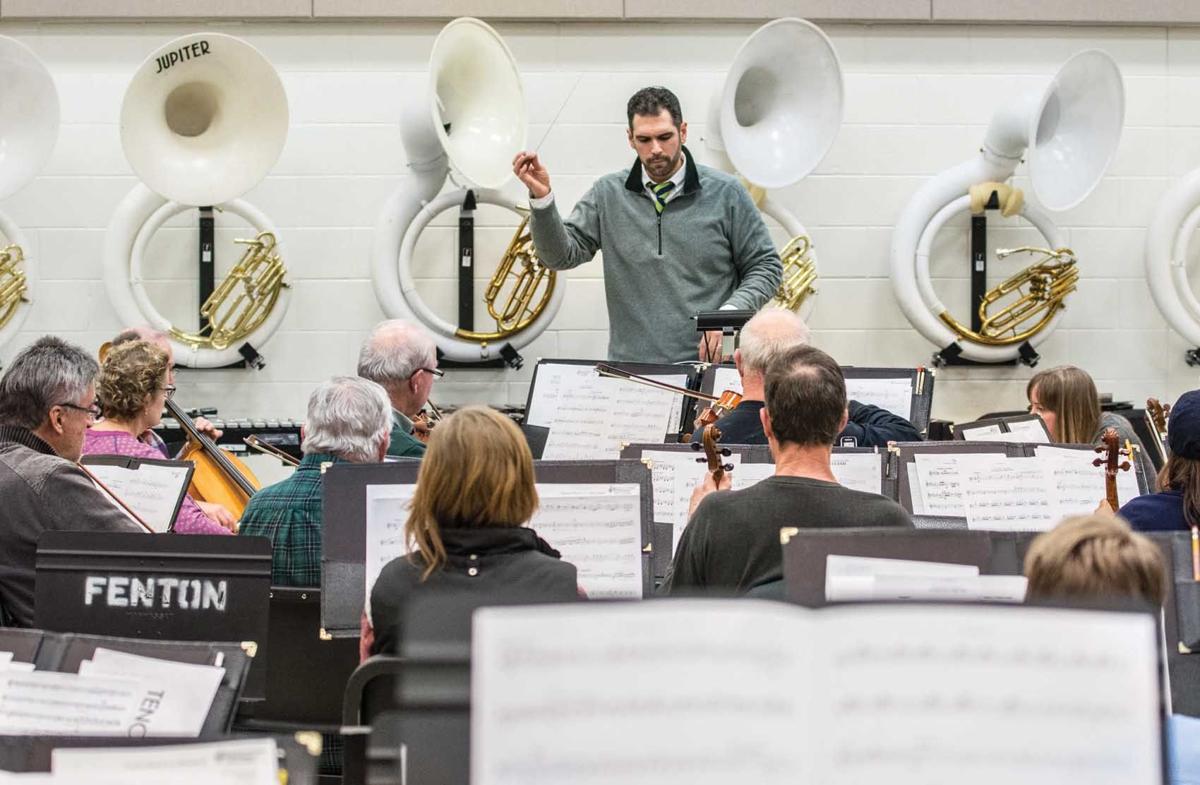 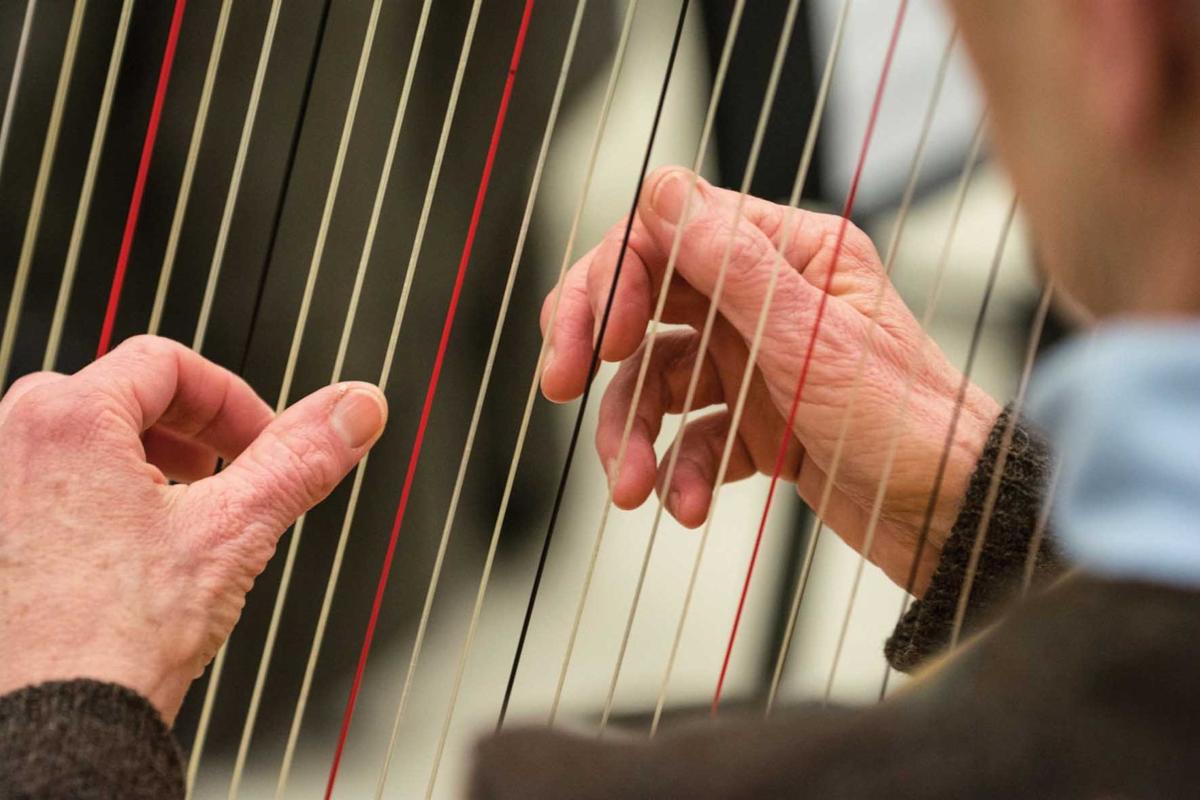 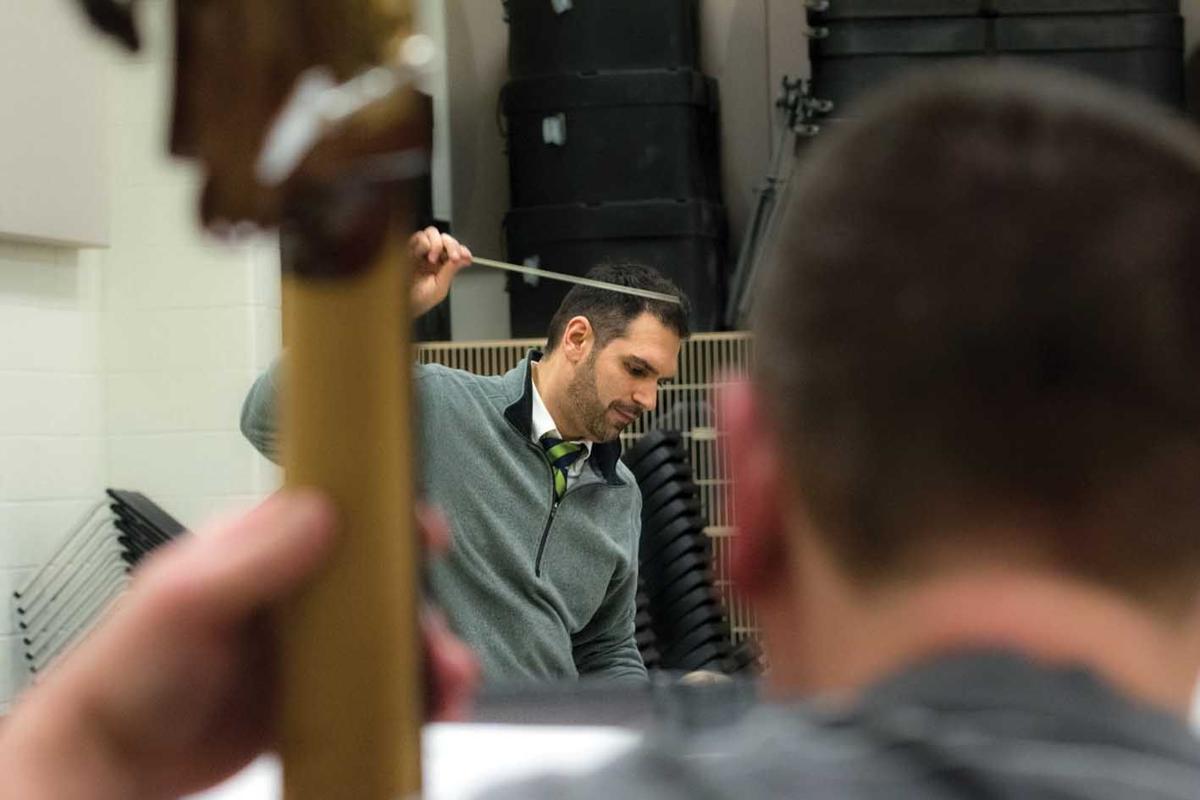 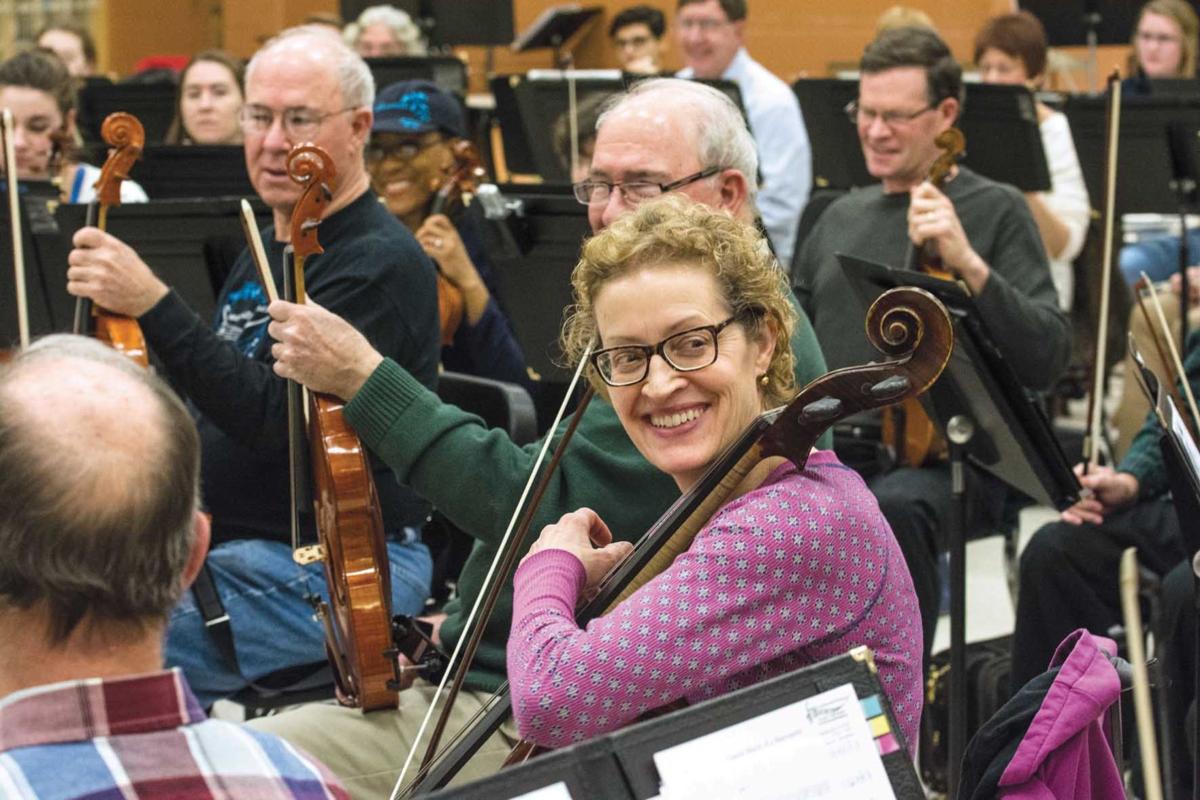 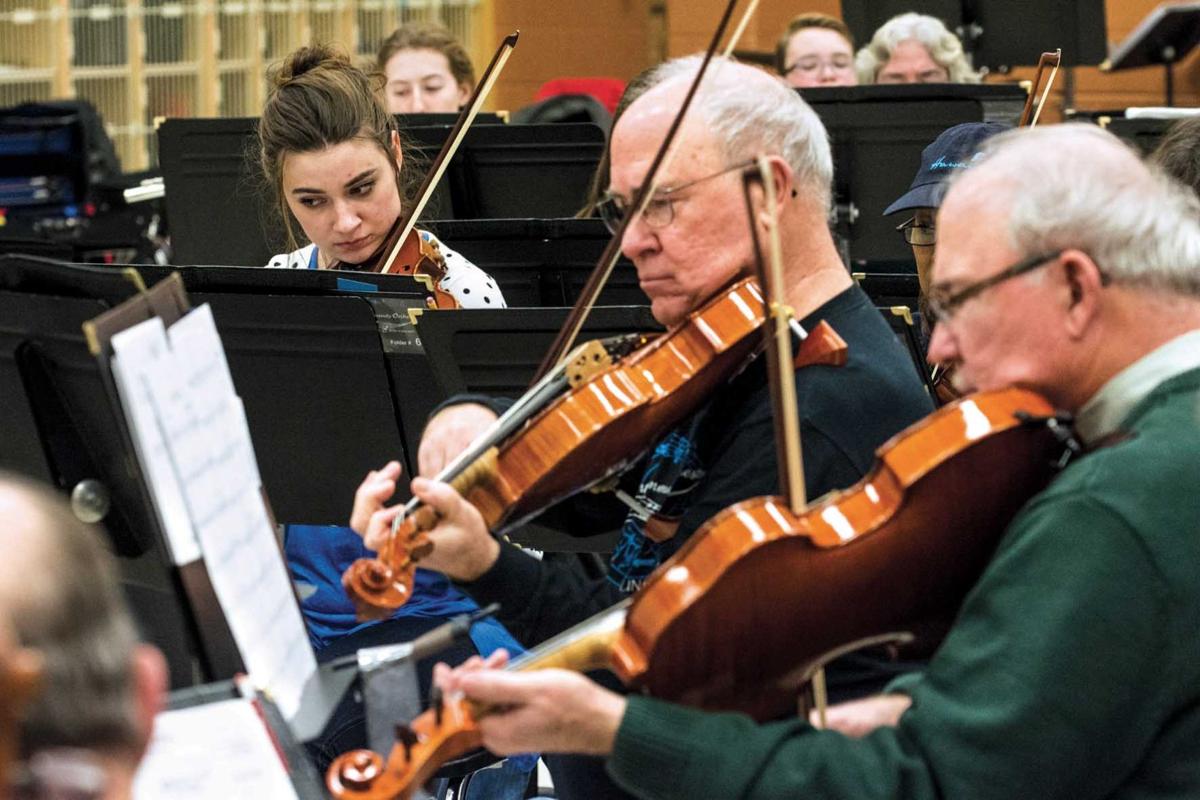 The Fenton Community Orchestra has 75 musicians and everything from a drum kit to harp. Members are of a wide range of ages.

Andy Perkins conducts the Fenton Community Orchestra during rehearsal Thursday night at Fenton High School. The group is preparing for a spring concert, and also a performance of all new material Perkins composed, inspired by the classic film, “The Birds.”

The Fenton Community Orchestra will perform an original score for the classic thriller “The Birds,” on Saturday, Feb. 27. The original movie did not feature a musical score.

The Fenton Community Orchestra has 75 musicians and everything from a drum kit to harp. Members are of a wide range of ages.

If you were born before 1963, Alfred Hitchcock’s masterpiece thriller, “The Birds,” is likely among some of the movie milestones you have remembered during your lifetime.

“The Birds,” starring Tippi Hedren, probably had you sitting at the edge of your seat, watching as an unexplained onslaught of birds terrorized, Bodega Bay, a coastal California town.

It’s a movie that caught the eyes and ears of Fenton High School Music Director Andrew David “Andy” Perkins, who is also the director of the Fenton Community Orchestra and a composer. He has been a big Hitchcock fan since his dad, a huge film buff, turned him onto Hitchcock movies when he was growing up.

What you might not know about “The Birds” is that it intentionally didn’t have an orchestral musical score, according to Perkins. This was an attempt by Hitchcock and his regular composer Bernard Herrmann (“Psycho,” “Vertigo,” “North to Northwest”) to make the story even more true to life by using an electronic soundtrack with simulated birdcalls and wing noises, rather than music.

When Perkins and his wife, Natalie, visited California in 2013, they recognized some of the places where “The Birds” had been filmed. She reminded her husband that the movie didn’t have an orchestral music score.

That idea motivated Perkins to write his first original film score, to be performed by the Fenton Community Orchestra.

Perkins spent from September to early December intensely writing pages and pages of musical score, carefully cueing the music to each film scene. “I couldn’t just write it the way I wanted,” said Perkins. “I had to write it in Bernard Herrmann’s style, and in the style of 1963. That added to the complexity of the project.”

This labor of love will be presented to the community at a special Red Carpet Gala on Saturday, Feb. 27 at the Fenton Community & Cultural Center. A limited number of tickets are still available for this orchestra fundraiser by clicking on FentonOrchestra.org.

“We’re bringing a touch of Hollywood to Fenton,” said Perkins.

Doors will open at 6 p.m. for a cocktail party, a display of works by local artists inspired by “The Birds,” photo opportunities and a Silent Auction. Gerych’s Distinctive Flowers & Gifts will transform the community center into a special movie premiere venue.

“This is a unique cultural experience,” said Jennifer Fleck, FCO executive director. “It is rare to have an orchestra perform live to a movie.”

The show will begin at 8 p.m., projected on a movie-quality 24- by 14-foot screen that will float above the Fenton Community Orchestra. Perkins will conduct a Q&A with the audience during intermission.

“Writing 90 minutes of full orchestra music was a big venture,” said Perkins, who holds a specialist degree in Orchestration from the Berklee College of Music, a Master of Music degree from the University of Michigan and a Bachelor of Fine Arts degree from Michigan State University.

Perkins has headed the Fenton High School Music Department since 2002 and the Fenton Community Orchestra since 2011. He said he wouldn’t want to be anywhere else.

“I know I make a difference here,” he said. “I care about changing lives through music. If this premiere brings more opportunities for the (Fenton Community) orchestra, that’s great. But mostly, it’s something I thought just needed to happen. An inspiration, an idea, turned in to something so much more.”

The Red Carpet Gala in Fenton takes place, coincidentally, on the same weekend as the 2016 Academy Awards.

The Birds is a 1963 horror film directed by Alfred Hitchcock, loosely based on the 1952 story of the same name by Daphne du Maurier. It focuses on a series of sudden and unexplained violent bird attacks on the people of Bodega Bay, California over the course of a few days. The film features the screen debut of Tippi Hedren. It also starred Rod Taylor, Jessica Tandy, Suzanne Pleshette and Veronica Cartwright. The screenplay is by Evan Hunter. Hitchcock told him to develop new characters and a more elaborate plot, keeping du Maurier’s title and concept of unexplained bird attacks.