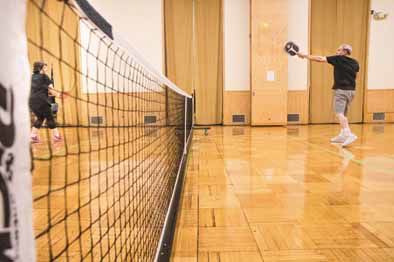 A small group plays pickleball at the Fenton Community and Cultural Center on Thursday, March 22. Southern Lakes Parks and Recreation hosts the $4 events, which run through August on Tuesdays and Thursdays, with the exception of the first week in April. 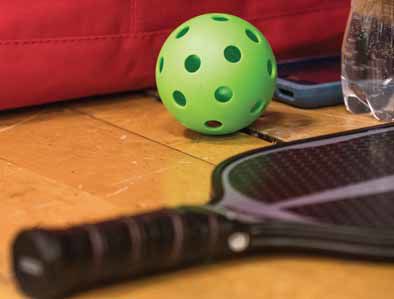 Pickleball utilizes a ball similar to a Wiffle Ball during game play.

A small group plays pickleball at the Fenton Community and Cultural Center on Thursday, March 22. Southern Lakes Parks and Recreation hosts the $4 events, which run through August on Tuesdays and Thursdays, with the exception of the first week in April.

Pickleball utilizes a ball similar to a Wiffle Ball during game play.

Fenton — The air is peppered with laughter, shouted game play strategy and the bright “thud” of the pickleball striking the floor and paddle during an intense volley.

Though anyone can play, this group all happened to be over 55, mostly retired. Several were involved in public schools. Karen Morgan, a substitute teacher said it’s her main form of exercise. “This is such a fun sport,” she said. “It’s a great sport to play with people you enjoy being with.”

Pickleball is played in all 50 states. It’s been around for 50 years, yet it can fly under the radar of locals seeking a way to stay active at any age.

Now, Southern Lakes Parks and Recreation offers it on occasion in the Fenton Community and Cultural Center with $4 drop-in games.

The game is played on a court the size of a badminton court, or half the size of a tennis court. The game is usually played by teams of two. They play up to 11 points, following the basic rules of badminton, after the serve.

“It’s like a cross between tennis and ping-pong,” said Robert Baier, 59, of Argentine Township. He has played for six years. He’s connected to a group of community members who play, and keep up on available games. Aside from these sporadic local opportunities, he usually plays at the Genesys Athletic Club or the Cage Fieldhouse in Swartz Creek on weekends.

The game originated in Washington, on Bainbridge Island. There are a couple accounts of how the game got its name, but the most popular story is that when the game was being played, one of the family’s dogs, named “Pickles,” would grab the ball and run off with it.

The actual ball is like a thicker, smaller wiffleball that can be smacked with a lot of energy without going very far. The paddles are larger than ping-pong paddles.

While the game holds its popularity with seniors, some high schools have introduced it as part of physical education, according to the USA Pickleball Association.