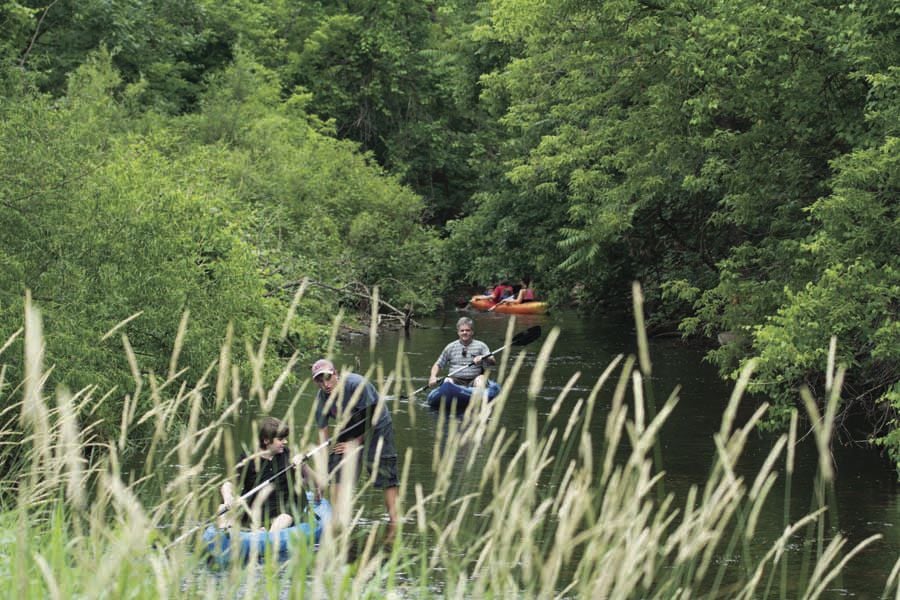 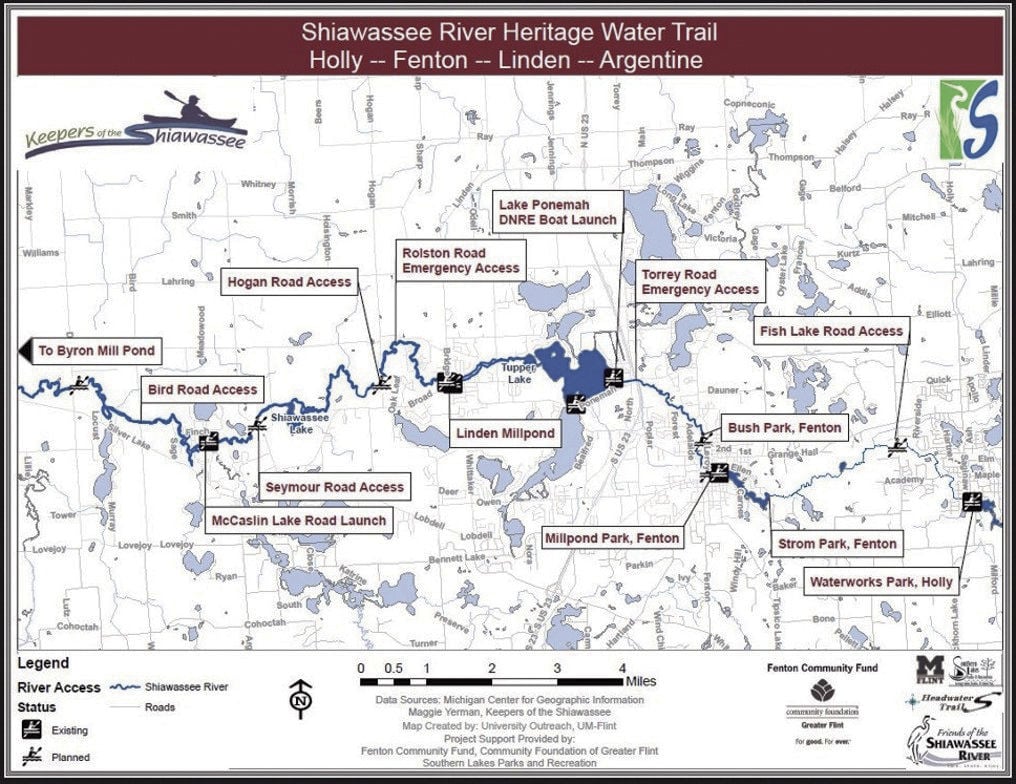 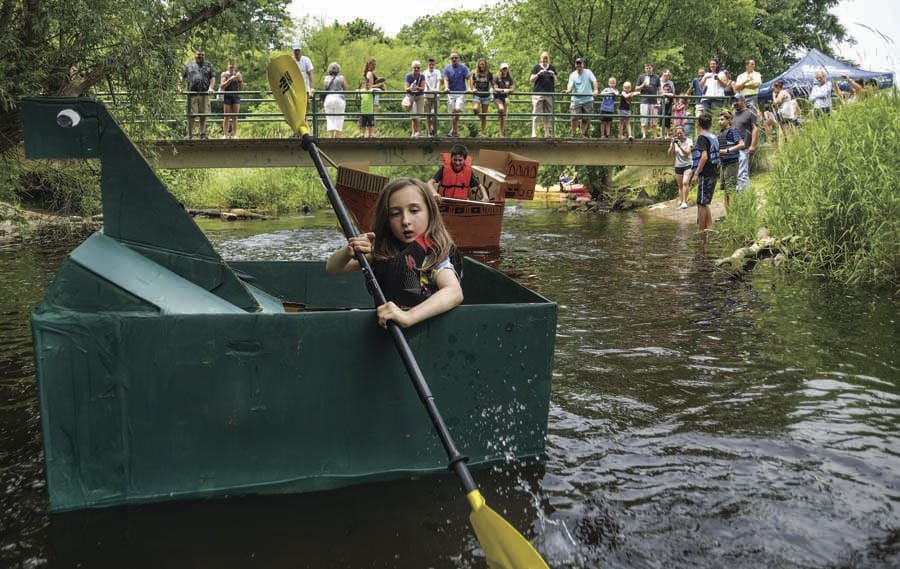 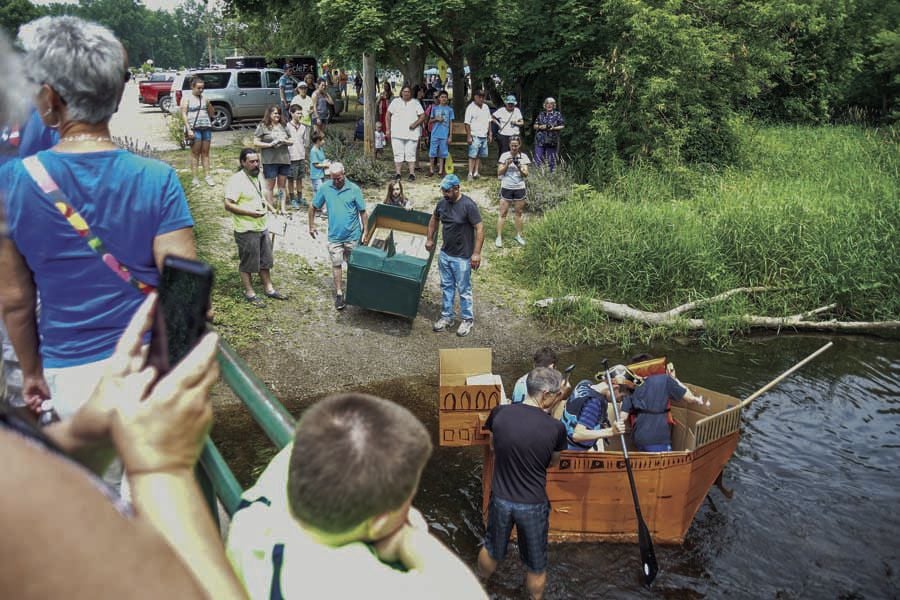 The spring season is the beginning of paddle season in Michigan, and that means exciting adventures for paddlers along the flowing waters of the Shiawassee River

Winding its way for more than 85 miles, the Shiawassee River starts near Holly in Oakland County, meandering through Fenton and Linden in Genesee County, heading toward Byron, Owosso and Corunna in Shiawassee County, and ending in Chesaning in Saginaw County.

These municipalities are also represented by local paddling groups that combine their efforts in promoting river events, from cleanup dates to Moonlight Paddles, Adventures Paddles and more.  These organizations, the  Headwaters Trail (Oakland County), Keepers of the Shiawassee (Genesee County) and Friends of the Shiawassee (Shiawassee County), are providing grassroots momentum to have the Shiawassee River designated as a National Water Trail.

“All of our work has been submitted,” said Brad Jacob, chairperson of the Keepers of the Shiawassee. “We’re just waiting for the official word.”

This designation will provide national promotion and visibility for the Shiawassee River, as well as the use of the National Water Trails logo and opportunities for technical assistance and funding to implement trail projects.

For local paddlers, the Shiawassee River provides endless outdoor recreation, becoming a hub of riverfront activities, from groups of friends enjoying the river to a riverfront festival that debuted in 2015.

This year’s third annual Shiawassee River Fest will be held Sunday, June 25 at the Linden Gazebo and Mill Pond, beginning at 12 p.m. with paddling demos, bands, food vendors, arts and crafts gear swaps, pilates/yoga demos on standup paddle boards and a group paddle from Bush Park to the River Fest site at the Linden Mill Pond.

“We moved it to Linden this year for several reasons,” said Maggie Yerman, an active paddler with the Keepers of the Shiawassee. “We’ll be able to use the gazebo for music, and we can invite visitors from the Gus Macker Tournament in Linden to the River Fest. Also, the water was too low last year at Bush Park for many of our water activities. Linden is also home to a kayak rental business, EZ Kayak & Canoe Rental.”

A Cardboard Canoe Race will return for another exciting year and a Fishing Tournament will debut for the first time, according to Jacob. Registration forms are available online at Keepersoftheshiawassee.com. or visit their Facebook Page — Keepers of the Shiawassee River, Michigan.

There are many opportunities for residents of all ages and abilities to use the Shiawassee River for outdoor recreation, from fishing to paddling.

You can see the complete list of public launches, and also use other easy access points, from Rackham Park in Fenton (by the tennis courts) to Torrey Road and North Road, Fish Lake Road in Holly, Hogan Road in Linden, if you just want to travel the river midway between launches.

“We are working on the Hogan Road launch at the water treatment plant,” said Jacob. “They’ve already mowed it down to the water. It’s already a good launch site. We’re just hoping to see some upgrades.”

• Lake Ponemah, at the DNR public boat launch, accessed from North Road. Kayakers can paddle across to Tupper Lake, where it meets again with the Shiawassee River.

Headwaters Trails and Keepers of the Shiawassee

Keepers of the Shiawassee

Friends of the Shiawassee

Volunteers to help with river cleanups and river maintenance throughout the season. Would your service club or church group like to adopt a section of the river? If you’re interested, we can find experienced people to go out with you and give tips on what is allowed through the Department of Natural Resources. Just show up at the next river cleanup or leave a comment on Keepersoftheshiawassee.com or our Facebook page.